Pregnant with Twins, the Second Trimester

It's always such a nice thing to turn the corner into a new trimester when you're pregnant. The second trimester marked being 1/3rd of the way through to me, and of course, meant that the twins were likely to stick around. I got excellent results back from the nuchal fold scan and blood work, and the general preggonoia that accompanies pregnancy was somewhat in remission, other than some nervousness over having twins in general. I had to focus my preggonoia somewhere, so I started worrying about the c-section rates. From what I found online, 50% of twin pregnancies were c-sections. So I started looking for a doula. It was the only thing I could think of that would help me prevent a c-section (other than just generally trying to stay healthy). It turns out that many doulas will work with a mother having twins for free, just to get the experience. Apparently, there aren't very many moms-to-be of twins who are aiming for a natural birth. And so I found Crystal. She was sitting for an exam to receive her midwife certification right around my due date, and was eager for the experience of a twin birth. She was young, vivacious, glowing and such a positive presence that I knew she would be perfect.
Meanwhile, I had my 16 week appointment. My doctor gave ultrasounds every single visit. He said that he didn't feel the doppler was reliable with twins, so he wanted to actually see the hearts beating each time. I had no objections to that! And so it was that at my 16 week appointment I asked if he could tell the sexes yet. I confess that I'd been hoping for a girl in there somewhere. Dr. Harding announced that Baby A was a boy, and I could see it for myself on the ultrasound. I held out hope that Baby B would be a girl, but I could see for myself that it was not to be. I did feel a moment's disappointment, but that quickly changed over to enthusiasm as I thought of how close the three brothers would be.
16 weeks (click on picture to see full view): 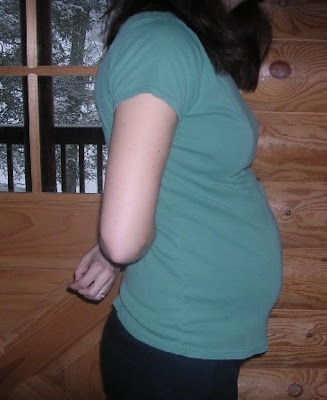 With my waist band expanding so quickly, I did have a lot of pelvic aches and pains. But I continued to run until 20 weeks, with my doctor's blessing. At 20 weeks, he said, "You're really starting to worry me." This is because there is such a high risk of premature labor with twins. And when running, I would have lots of Braxton Hicks contractions (they actually started around 15 weeks, when I first started feeling movement). And so, I stopped running at the halfway point, in hopes of keeping myself and the twins healthy.
24 weeks: 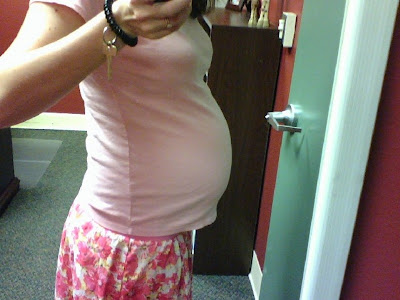 By the end of the 2nd trimester, things were starting to get uncomfortable. I was sleeping (when I did sleep) with about 6 pillows. Paul called my pillows The Great Wall of China. But I must say, it wasn't nearly as bad as I'd expected. Truly, when I found out I was pregnant with twins I expected the worst, but so far, it hadn't been nearly as bad as my pregnancy with Pierce. The end of the 2nd trimester also marked the beginnings of a new worry. Baby B was breech. I began to pin all my hopes on him turning his little butt around before delivery day.
Click HERE to read about the third trimester.
Click HERE to read about the first trimester.

I love reading about your pregnancy! So before giving up running at 20 weeks, how long were your runs?

In the first trimester I still did 20 to 30 mile weeks and ran up to 10 miles at a time. By the second trimester I was really slowing down and my runs grew a lot shorter. I struggled! So they shortened to 3-5 mile runs for the most part.