What's the Toddler Been Up to AND Overcoming Arachnophobic Motherhood

I've been posting a lot about everything but Pierce lately.  But he's very much been busy.  Doing what you ask?  Mostly, asking me "WHAT'S THIS" four million times a day.  In particular, he likes to ask this about things that he knows the answer.  So half the time I'm like, "What do you think it is?" and he's all, "A zipper" and I'm thinking, "THEN WHY DO YOU KEEP ASKING ME?"

This week we finished our Winnie the Pooh explorations and I decided that I wanted to do Charlotte's Web next.  Typically, before we start a new chapter book, I try to get him psyched up about the topic, so that he is more likely to enjoy listening to chapter by chapter with very little in the way of pictures.  And so we started with Be Nice to Spiders and a craft. 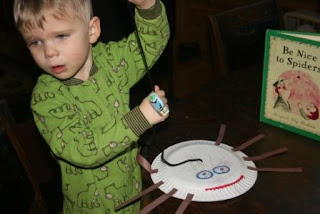 Personally, I'm more from the KILL, STOMP, AND MAIM ALL SPIDERS camp.  However, I hippocritically read Be Nice to Spiders to Pierce.  Just two months ago our basement was infested with wolf spiders. SHUDDER. A nest had hatched right outside the sliding glass doors.  I was running on the treadmill warily watching a couple of them, when one fell off the ceiling.  I seriously almost fell off the treadmill it scared me so bad.  I called Terminex and they came out the next day.  I'm all for the slaughter of spiders.  Screw being nice to them.  But let's not tell Pierce.  Although...even if I want his life to be all warm and fuzzy right now, does that really need to include spiders?

After reading about Helen the spider and her zoo, we decided to make a zoo of our own.  Here is Pierce, jumping through his parade of animals.  This is impressive, because it's not so easy to drink from your sippy and jump over animals at the same time. 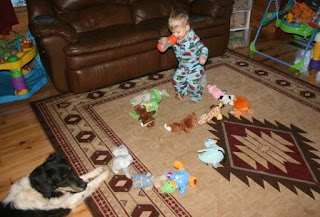 After Cort and Reid put on their bear suits, they got in on the zoo action. 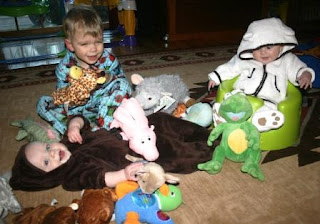 Now this is much more the warm, fuzzy I had in mind!