The Leaning Tower of Yellow Book

This weekend I decided to undertake some decluttering and reorganizing.  Pierce's art supplies in the pantry had gotten out of control.  So I started by working on the cabinets to try to make more room.  And what did I find?  SEVENTEEN phone books.  Why yes, you did read that correctly.  Who has seventeen phone books???  Us, apparently.  I broke out in a sweat, thinking, this is it.  We've officially become hoarders. 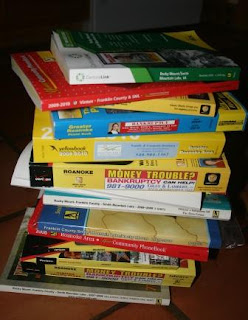 But then as I was going through them, I realized something.  Sure, a few of them were out of date.  But the majority were current.  Therefore, I can default blame to the people at Yellow Book.  They are the ones with obsessive compulsive phone book making disorder.  Total OCD people, go take some Paxil!  So hooray, I'm off the hook!  I'm not really a hoarder after all.


Well, then I found these: 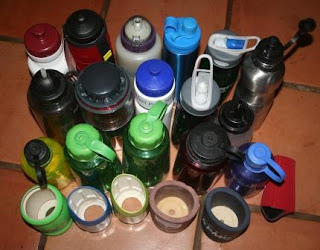 SIXTEEN waterbottles (and six never-used koozies)
Well, at least I'm willing to get rid of my stuff.  Ever read Ghosty Men?  Now those brothers...they were some professional hoarders!

If you find a one liter stainless steel water bottle, I am looking for mine :-)
lovemom

We're on the verge of identifying our stashes of junk...and I am so not looking forward to it. Anyhow, bravo to your for clearing out!