I Heart My Dirty Girl Gaiters

I've been running a lot more on trails lately.  Not the best training for NYC, but at least I'm getting some miles in.  I signed up for another trail race in the near future - this one a half marathon.  I'm very excited.  In the meantime, I recently invested in a pair of Dirty Girl gaiters, which you can buy for just $17 (including s+h!) here .  My friend, Anita, told me about them.  She runs ultras practically every weekend (and has done Western States), so I figure she knows what she's talking about.

What I love is that they have all different patterns with hilarious names.  The pair I chose is called Giardia (lol).  Hopefully I'm not tempting fate wearing them.

They are not waterproof, but are instead designed to keep debris out of your shoes.  Leaves, pebbles, and dirt can't cross the Dirty Girl gaiter.

Here I am on the trails in Douthat State Park: 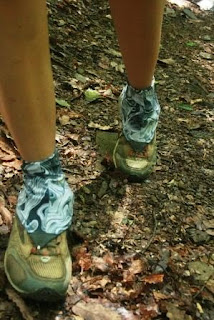 Anyhow, if you're a runner, and do a lot of trails, they are well worth the investment.
I did a 13 miler yesterday (so humid out!) so hopefully this upcoming half marathon will be a little easier than the last one.  I'm slightly more prepared for the mileage :-)

i've written it before -- your running is so inspiring!! love the shoe name : )

I love my Dirty Girl gaiters, too! :)

Lisa I love your new design! So cute!