I realize that my use of the word 'deconstructing' isn't entirely appropriate, but it just feels right as I sit here and analyze my workouts over the past month.  I have really struggled trying to get back into shape after the twins, and May has been my best month so far.  It still isn't where I want to be, but I'm getting closer.  And  that feels good.

So here's to May:
3x weightlifting
4x yoga
2x hiking with Cort
95 miles of running (no races this month)

First, the positives.  What did I do right?  Well, my running is consistent.  I did several long runs during the course of May.  I got in yoga weekly, and almost got in weightlifting weekly.  I ran lots of hills and I ran at different times of the day to increase my heat tolerance as summer nears.  I managed to get up early to run a couple of times.  I ran in rain and storms.
Motivation this month was decent.  I downloaded some fun podcasts to listen to, including some of the Nike professional runner interviews.  I also downloaded an awesome podcast workout by YogAmazing called Yoga for Runners.  Just 20 minutes, it stretches all those running muscles.

Okay, so where do I need to improve?  I have got to start hitting the track once a week.  I know I keep saying that, but I really NEED TO ACT ON IT.  I also need to at least be doing weights once a week, although 2x a week would be more ideal.  Also, it would've been nice to hit 100 on the miles.  I am a little mad at myself, as I certainly could've fit in one more 5 miler somewhere this month.

Anyhow, I'm getting there.  I'm being careful about my progress.  NYC is my long term goal, but I'm trying to gradually build up the mileage.  My hips still ache constantly after runs, as does my IT band.  This pregnancy sure did a number on me.  I need to hit the chiropractor because I think it would do me some good.  Overall, things could be much worse, and hopefully June will be an even stronger month for me.  I'll be racing on Saturday in a half marathon.

Now, speaking of racing, this weekend was the AEP run.  Cort, Reid, and I hung out at the starting line, just across the street from our running group Striders friends who were volunteering. 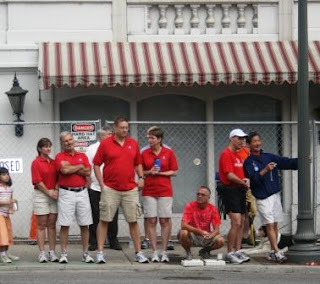 The racers were off: 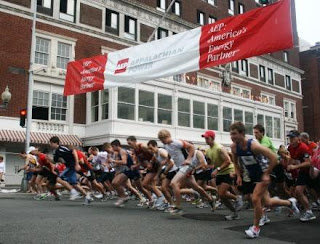 Paul and Pierce ran together.  Pierce rang his bell along the 5K.
Paul hurt his back running with the stroller one handed, and has been laid up all weekend.  Hopefully he'll feel better soon.  Let me just say...running with a stroller, even the ever-awesome Bob, is not easy work! 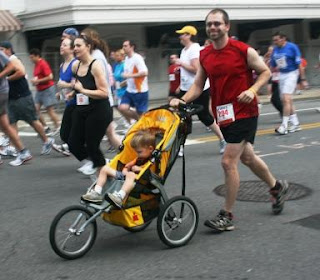 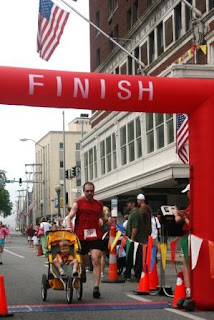 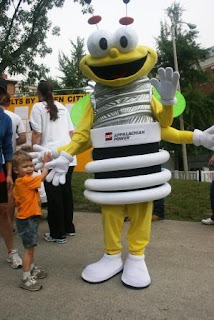 How was your May?  And do you have goals for June?

My goal for June is to declutter my laundry room. Nowhere near as noble as training for a marathon, but a huge challenge for an unmotivated housekeeper like me.
lovemom