Saturday after completing my 18 mile training run we decided to head to the medieval fair.  My legs were tired and I was kind of dehydrated, but the following day would be rainy so it was our only opportunity to get out.
When Paul and I lived in Houston we used to go to the Renaissance Festival.  It was AWESOME.
This?  This little medieval fair?
Well, kind of a let down.
But at least we got out of the house.
There were lots of little tents with wares. 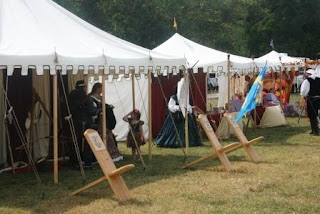 You could buy all sorts of little trinkets (we only looked but didn't buy). 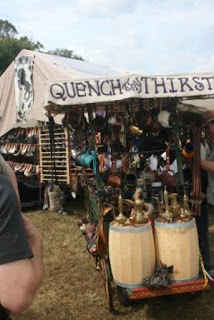 After all, we just don't have much use for swords around the house.  Even when the boys are having big tantrums over who gets to sit in the Fisher Price Learning Chair. 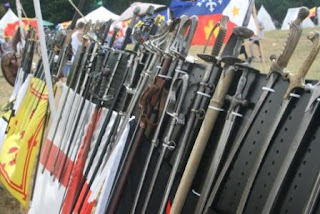 We also watched some games.
This guy was trying to hoist a big heavy bag over the pole with a pitchfork.
He missed by quite a bit! 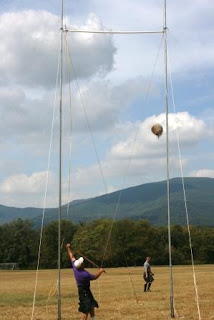 Course the kids playing games were the cutest.
You know this'll be Cort and Reid in a few years... 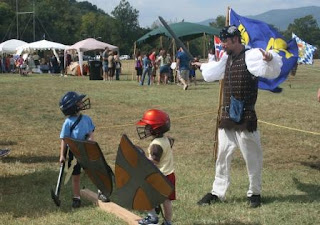 And Pierce posed in the stocks. 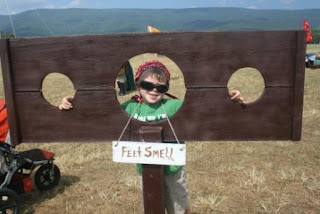 Other than watching a magician for a few moments, that was pretty much it.
Still, nice to get out for an afternoon.

If my grandson had been there (age 13) he would of bought up lots of swords.. His Mom would never let him have one. John always used sticks.. when he came to my house . We would go to the state park and walk the trails,,he would always find a good stick to whack against the trees.. I have never been to one of these festivals but I'll bet it was fun.. We have a lot of civil war reinactments.. I love to read about the civil war but have never gone to one of these reinactments. Glad you took your kids out for a little adventure.. You will be surprised they will remember what they saw..
Received your package the other day and I just want to thank you so much.. Ben loves the pop-open book..I must of read it to him 3 or 4 times last night. He is into stickers right now, we use them for rewards... The activity book I sent to my grandchildren ages 13,11,9 that live in the Chicago area.. Suburbs.. Barrington. I thought they would enjoy all the activities that was in that book.. The floating candles Ben and I put in a halloween bowl that I have and we lit the floating candles.. turned off the lights and just looked at the glow.. He loved it.. We are enjoying everything that you sent and we thank you so much...

When I lived in Illinois we would go to the Medieval Fair It was fun to see the people dressed in costumes, the minstrels, and the trinkets and treasures. They had puppet shows, and tours of a castle - very neat! It was a big draw for the weekend crowds in fall.

Ahhhh you didn't buy swords for the boys??? Just kidding, could you imagine the hurt they would put on eachother! I'm sure since boys will be boys they will figure out a way to make a tree branch a sword. :)

I personally am glad you didn't buy swords!! I do think that you could have used that gizzmo that Pierce...I mean Diego...is in!...:)JP

At least you got out of the house! yeah not sure I would want swords around the house! lol