Memory Lane Friday is a weekly blog about your memories, to preserve them for your family.  This week's topic has no theme, so you can blog about any memory of your choosing and link up.  Next week's topic is 'A Restaurant'.

When I left for a college halfway across the U.S. from my home on the outskirts of Washington, D.C., I wasn't sure what to expect. Texas was another culture in so many ways. But I loved the idea that I would be adventuring off to a far away place for school. I had been matched up with two roommates. That's right, I was in a dreaded triple. If there's one thing college architects should NEVER do, it's design dorm rooms that sleep 3.

Here is a picture of my bed with my desk to the right: 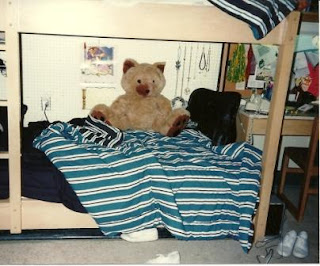 My roommate Mary had the bunk above me, and my roommate Meredith had the bed across from me.  The room was actually fairly large.
Things started off fairly well.  Mary rode horses and was from a different state as well, so we had that in common.  Meredith was from Texas but was fairly vivacious and agreeable.  At first we all got along just fine, going to pick out matching comforters and buying snacks together.
Then things with Mary started getting kind of strange.  She had brought a gliding rocking chair from home, and started spending all of her time rocking, rocking, rocking.  She even started sleeping in the rocker.  All day long, she taped the soaps, and then at night she watched them all in her rocker.  This meant that Meredith and I frequently had to watch the soaps twice.  We weren't thrilled.
Mary refused to get out of her rocker for anything.  She ate in the rocker, and soon the floor became littered with dirty pots and pans surrounding the rocker.  We would walk in to find her talking to her shrink from home for long hours, instucting us to leave and not return until a designated time, after her counseling session was over.  She began making strange comments, "I was watching you in your sleep last night".
Meredith and I became increasingly disturbed by her behavior.  Twice we met with the Resident Advisor, but both times Mary had played the innocent, claiming that it was US against HER and that she was trying so hard to be our friends.  She adamently refused to switch rooms, even though we begged her.  She said that both of us would have to move out; that there was no way she would vacate.
Then one day, Meredith and I found two knives underneath Mary's mattress.  I'm not sure why we were snooping, as we really had no right to.  All I can say to justify this is that we were totally creeped out by the things going on.  Since it seemed that the dorm advisors were unwilling to take any action, we decided to take things into our own hands, by trying to get Mary to leave.
I don't feel proud of being a "mean girl".  With maturity, I have realized that Mary had some mental health issues that were affecting her.  At the time, though, I just wanted to feel peaceful in my dorm room.  We did silly girl things.  We put Orajel on her toothbrush, stinky sleeping herbs on her pillow, and tape over the batteries to her remote so she couldn't tape her shows.  We reversed the motor on her fan so it would suck in rather than blow out.  And we probably did a couple of other silly pranks too that I've forgotten.  Obviously, we confiscated the knives and turned them in to the dorm mother.
Our plan, while not very nice, did work.  Mary moved out promptly, and we enjoyed the rest of our freshman year in peace.  While Meredith and I were never really best friends, we had a mutual respect for one another and had a pleasant year together before going our separate ways.
If you'd like to blog about a memory of your own, link up your blog below.  And don't forget to visit the other bloggers!

While Mary sounds like she had horrible issues, it doesn't sound like she was ready for dorm life.

WOW! What a way to experience college. I hope that Mary finally got some help. Good thing she never did anything with those knives you found!

Wow! I agree. It sounds like she wasn't ready for dorm life. I hope she got the help she needed.

What a way for you to begin college, with experiences like that!

Mary did certainly have issues! But I can't picture you being mean AT ALL!!! Me...I am speechless over this one, Baby Girl!

Oh my gosh how scary is that!!! Good thing you were snooping, I would hate to imagine what could have happended with those knives if you didn't snoop.