I'm Not in Virginia Anymore

Paul and I had a very early morning.  We caught the 7:30 train out of Lynchburg, which is about a 90 minute drive from us.  So it was an early start. 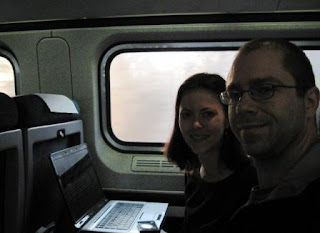 The train was fun.  Much like an airplane, only roomier, and with no seatbelts.  Riding along this morning, we watched the sunrise up over the mists in the valleys, the leaves of fall practically at peak color.  I found the clickity clack of the train and the intermittent, muffled whistle very soothing.
How fabulous, to just sit and do nothing.  For hours.
The train passed through my old high school stomping ground, Old Towne Manassas. 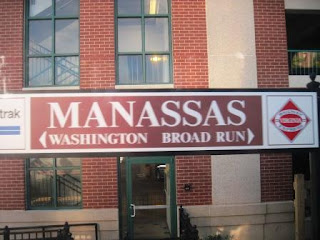 Here's a view down through the cars: 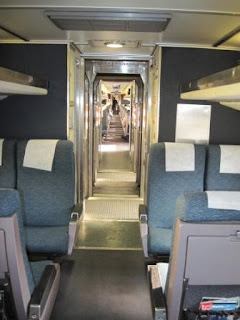 It was just outside of Washington D.C. that we ran into trouble.  Apparently, further up the track, there was a minor wreck of a freight train.
This caused delays, and we were paused off and on for around 90 minutes.
Thankfully, we had back issues of The Office, Season 6, to watch, along with internet, magazines, and books.  So it wasn't too bad.  We eventually had to switch trains because of the accident.
Passing through Washington D.C.: 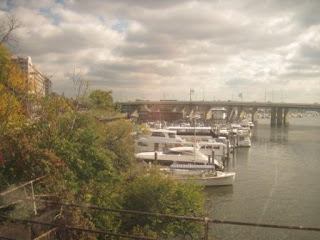 Finally, a good 2 hours later than expected, we pulled into Penn Station.
And promptly began to unknowingly walk the opposite direction from Times Square.
By 13 blocks or so.
Wheeling our luggage. 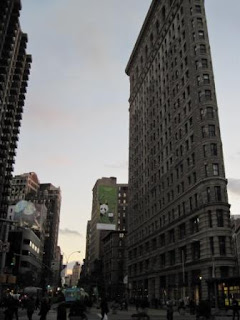 This ended up causing us to walk 25 blocks out of the way, pulling our luggage the whole way, in the middle of rush hour.
So that was interesting.
This seems to be a theme with Paul and I - these epic walking detours in random cities.
I still have nightmares of the time we thought it wouldn't be very far to walk from West End Dallas to Deep Ellum.  Rather late at night.  It was an terrifying enlightening detour.
Ah, finally, we found Times Square! 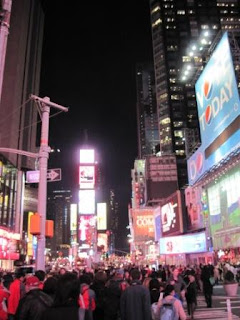 The view from our hotel: 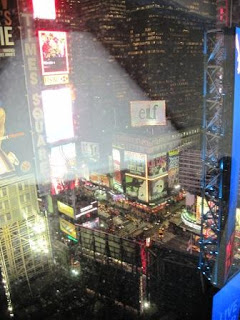 We promptly dumped our gear in our room and headed out for dinner.  We were starved!
We found an unlikely place called Ellen's Stardust Diner. 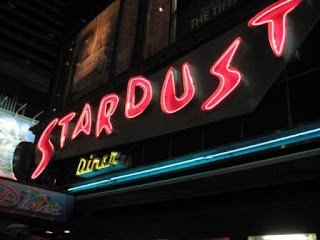 Crammed full, music loud, service slow.
But great food (I had a reuben) and the entertainment!
All the wait staff are Broadway wannabes, and they sing and dance on the tables through your meal.
This girl was actually on the rail behind our booth singing: 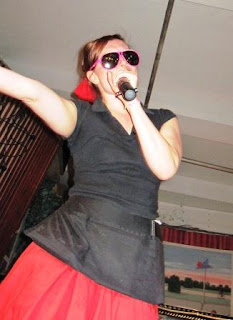 And to cap off the night?
Yeah.  You know it called me in: 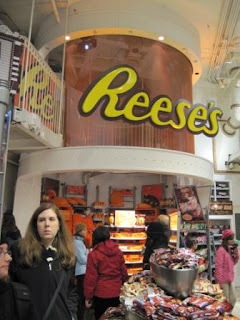 Good luck Lisa. We are praying for you. Dad

I have tears in my eyes ~ I'm so excited you made it to New York..~! I have been praying for you and your foot.. Please be careful and run like a big bear is going to bite you in the butt. Have fun and enjoy~ ta ta for now from Iowa ~ sunny and 21 degrees.

Yay!!! I love the live feed from you! Excellent! I'm so homesick, tho! And ehem, I told you to ask for directions. New Yorkers ARE friendly!!!

Wow, you made it to the Flatiron building. Eek. That's quite a walk in the wrong direction. But an adventure for sure.

Good luck, girlie! Can't wait to hear more from you.

What an exciting adventure you are living right now! Good Luck! Hope you WIN!!!!

I've eaten at Ellen's! It's fun :-) Another great place was Junior's - they had the best cheesecake! We took the train from Boston to NYC, and I agree that it was pretty nice.

You made it! Now for the race! Good luck. sandie

glad you made it safely! good luck on your marathon! another friend of mine from college is running it too...y'all amaze me!

How cool! I hope you have a great time.