A Dog in the ER, on Christmas

Paul and I received a sports video camera for Christmas from his parents.  You can wear it on your head and take video as your are biking, running, riding the horses, etc.  I saw many people wearing these at the NYC Marathon, and thought they were pretty cool.
So on Christmas Day Paul set off to go for a run to try it out.
Scooter loves running, so of course he went with him.
We had a couple of inches of snow on the ground that had fallen during the night.  Not much on the roads, but Paul and Scooter were hitting the trails on our place, where there was more snow.
As Paul was running, he heard a crunch, and realized he'd stepped on some glass.
He didn't think much about it, but a few minutes later he saw blood all in the snow.
Turns out Scooter had hit the glass (Paul later went back and found it - it was a very old bottle) and cut his paw severely.
They came back of course.
Our back porch is covered with footprints like these: 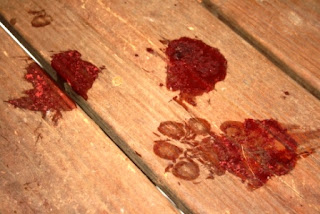 So off to the emergency vet ER with Scooter.
Thankfully, they are open on holidays.  We have long been a customer there.  In fact, in their database we are customer number 68.  Out of some 60,000.  They thought it was funny.
Scooter had cut a tendon and an artery.
It's good we got him in.
He got good loopy drugs and 6 stitches.
And a bandage that he promptly removed himself when we got home. 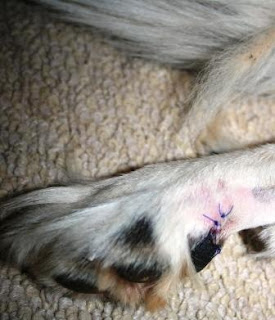 See the stitches, just above the pad?
Anyhow, because a tendon was cut, Scooter is supposed to stay quiet for 3-4 WEEKS.
Yeah, pretty sure that they didn't take the 'border collie effect' into consideration when they made that recommendation!
You never heard such big baby crying when he doesn't get to go outside to join in running and sledding.
Hope he survives.
I'm linking up today with Show and Tail over at WV Treasures.  Check it out, HERE!

Email ThisBlogThis!Share to TwitterShare to FacebookShare to Pinterest
Labels: scooter

Ouch! Ouch! Ouch! Glad you were able to get him into the veterinary ER!

Oh my heart just jumped into my throat when I read your title. SO glad it was a manageable emergency. I hope Scooter can heal okay, but I know he's not going to make it easy on himself...

My little Catahoula, Louise, cut her front foot and tore a tendon also. The vet snipped it off as it was protruding from her paw. That toe is still bigger than all the others on her paw, but at least it is healed over. She kept a bandage for about a day and that was that.

Oh I wish him well - poor little dog. I hate when they get hurt. They are so wonderful and so innocent.

OMG! That would have given me a heart attack! I'm so sorry. Poor baby!!! Hugs and hope he heals quickly.

Oh no! Poor Scooter! I'm glad that your vet was open on Christmas! I'm sure it is going to be hard keeping him calm for 3 weeks! I hope Scooter gets better soon!

Love your blog! So you're glad Scooter is doing okay. Don't know how you're going to keep her quiet though! I have corgis and there's no keeping them quiet.

Ooh, give him some hugs and well wishes!

I knew he should have moved in with me! The poor guy! Good luck trying to keep him quiet...not unless Paul stays home on the couch for a week or so...:)JP

Oh Scooter! I'm so glad you got him into the ER Vet otherwise he might have had worse problems. I don't envy the "keep him quiet for 3-4 weeks". That almost seems impossible! Best wishes for the New Year. Ann

I hope he stays a good patient and doesn't eat the stitches.

Aww poor puppy! Our beagle Did the same thing a couple years ago.

Yeeeowww! That looks nasty!!!Glad he got fixed up. Have fun keeping doctors orders;))

Ouch! I hope this sweet fellow heals up quickly. Thanks for sharing a sweet story with us today. Please come join me soon. Anne