How to Clean Up Dog Vomit When You're Really Neurotic

Warning:  Gross post ahead.  Abandon ship, those with weak stomachs!

Thankfully, our border collie Scooter doesn't get sick very often.  But the other day the twins had fevers and didn't want their lunches.  They dumped a massive amount of mac and cheese on the floor, and I decided to cheat a little by letting Scooter come in for initial clean up.  I hadn't even finished washing the lunch dishes when I heard a hacking.  You know, the very hacking you DO NOT want to hear.

I quickly shooed him outside, but it was too late.  There was the most massive pile of dog puke on our rug and wood floors.  Seriously, I won't give you details but it was a HUGE amount.  How does his stomach even hold that much?  Oh ick.  I'm the biggest baby when it comes to cleaning up puke, have I mentioned?

Because it was a good two+ inches tall, I started by bringing the trash can over and using newspaper to scoop.  By this time the twins were interested.  So I was waving my hands saying "YUCKY!  YUCKY!  NO! NO!" while trying to wave them away.  The last thing I needed was for them to dive into the mess like it was playdoh.

I continued to shoo the twins away so the rug could dry.  But two hours later I still had images of dog puke in my head.  I started worrying that maybe Scooter threw up because he had worms.  Or even parasites.  (And this thought is what did me in - honestly I'm not OCD but I just couldn't get rid of the thought of us all catching worms!). So I got out the Clorox wipes and scrubbed the rug and floor again.  And then washed my hands again.

An hour later I hit the area one more time with Clorox wipes.  And then I scrubbed it with a little Nature's Miracle for good measure.  Then I went outside and dewormed Scooter for hookworms, roundworms, pinworms, and tapeworms.  This involved 3 pills plus a liquid dewormer.  Poor Scooter.  Then more hand washing.

No lie - 8 hours later I was still thinking about dog puke.  So I vacuumed the rug and mopped the hard wood floor beside the area rug.  Then for good measure I mopped the rest of the house.

I think it's clean now.  I so need a steam cleaner!  Also - as it turns out - Scooter got into the chicken feed, so that's what made him ill.  All that worrying over worms for nothing! 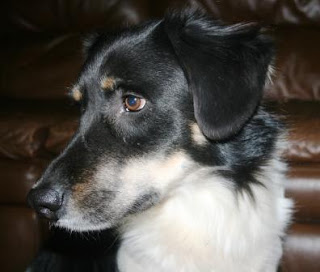 So she's totally going to kill me for this, but I'm linking up today with Angela's Show and Tail at WV Treasures.  Because as all responsible pet owners know, sometimes it isn't just cute furriness.  But we love our messy furry/feathered friends anyhow!  Go check Angela out for less gross animal tales and pictures.
Also, please go visit Everyday Ruralty today.  It's a wonderful blog about rural living, farming, animals, and things of that nature. I have an interview over there, and I don't mention anything gross, I promise!

Reading this on any empty stomach is making me burp! At least it came out the front!!!...:)JP

Poor Scooter! Poor you! That's why I have no carpet in my house. ;)

I am so glad you were so thorough. This sounds terrible.

I gotta hand it to you. You don't leave any stones unturned!

Lisa! This about made me spit my coffee out laughing so hard! I hate to tell you, but you sound a little OCD to me. When I moved into my new house last year I did stained concrete floors throughout and with 3 dogs they are the best. Messes like that are easy to clean up. Poor Scooter endured all that worming for nothing.

Ha ha ha! I can so relate to the mound 'o dog puke, but I can't relate to obsessive cleaning (for any reason!)

Scooter - step away from the mac n cheese! She's going to eventually deworm you! It's a trick! Ha, ha. This had me smiling as I can totally relate to it all! I used to buy rugs and furniture based on how well they would camouflage animal vomit stains. Right now my current zoo seems to have relatively strong stomachs so I can finally get nicer things. Ann

Our dog Kona did this the other day-it too was a massive amount. Now this is really gross-but I had to keep yelling at Willow to keep her from doing the "clean up!" Yuck!!!

And that pre vomit sound-there is no mistaking it, is there?

you would think I, a nurse, could handle all different kinds of bodily fluids, but puke is one that gets to me. My childhood dog was sick for almost a year before we put him down when I was 16...he would puke almost daily....so I've been there...i found a spatula worked best to scrape it off the carpet (a dog puke designated spatula).

I'm also with you on the over board cleaning...taylor is sick right now and I'm following him around with a can of lysol. I'm determined that no one else gets sick!

Oh my goodness yes, get a steam cleaner. We have one and it has saved lives here, I am sure!

Angels won't kill you, but your pup might from deworming him! teehee I hate to clean up that stuff myself and am 'somewhat' like you! Sandie

Oh, my goodness! I probably would've been the same way! Blech!

However, I have to say "Poor Scooter!" Having tummy troubles and getting dewormed on the same day!

Yes, get a steam cleaner!!

Girl I'm with you. All the way.

I can clean up after anyone I am personally parenting without much issue. Any and everyone/thing else, all bets are off.

I'd have flashbacks too!

Looking forward to following you and thanks for the tip on Red Dress. I'm already a writer but I need prompts. Badly. My readers can only take so much "so a funny thing happened on my way to the grocery store" :)

I'm dry-heaving as I read this. I am the only puke-cleaner-upper in this house, oh, how I know the woe.

Quite a story - I was laughing about the OCD...and what a cute dog.

My daughter has been begging for a dog (our landlord doesn't allow them) for a long time.

I'm pretty sure that I would have ended up puking myself if I had had to clean that up. ugh.

I've got a very old cat with a sensitive tummy...cleaning up her mess is an everyday occurrence. If I had small kids I'd be more paranoid, but as it is...it's just my life.

LOVE your post! I have a long-haired cat who likes to deposit very gross hairballs and "stuff" wherever she gets sick. Lovely surprises! :-p

I found you on Everyday Rurality and am your newest follower. We raise corn and beans and cows and girls. Stop by for a visit soon!

Oh no! I can relate to the letting the dog in to clean up a food mess but it has been years since a dog has vomited in the house. I'm not sure I could have cleaned it up. Things like that really make me sick too! I'm sure I would have used many Clorox wipes on it too! Then I would have washed my hands in scolding hot water! lol Even after that I would feel like my hands were still dirty! lol

This is a good time to worm our dogs. I need to get some worm pills for my dogs. I always worm in the Spring and the Fall just as a preventative since mine are outside dogs and you never know what they are eating!

Melissa: Write it in Lipstick said...

Oh that is so yucky! But I love your homemade carpet cleaner!

Write it in Lipstick

Good grief! I've done that for my 4 Corgis - and that is horrid!!! They have vomit similar to extremely thick raw egg whites - and so hard to pick up! YUK! Enjoyed your post today - and you have a pretty dog, by the way!

Aw...the joy of being a parent and a pet owner! HeeHee! Never a dull moment. Thanks for sharing this gross post today. It is, afterall, a fact of life!

Oh man, I'm laughing and gagging at the same time! Here you went for the time-saver and it totally bit you back. Ouch!

Yikes that was a tale :) I don't blame you for worrying-I'm the same way. And don't it seem if they do get sick-it's always on the rug!!

When I had my dog & he would do the HUGE puke pile my clean up routine was pretty much like yours. nothing like getting ready to eat something & then remembering the puke you cleaned up hours & hours before. Hey on the plus side, now your hosue is clean :)

Poor doggy and poor you too. :-(
I think all pet lovers can relate.

The time my border collie puked up a possum, I had to use a shovel