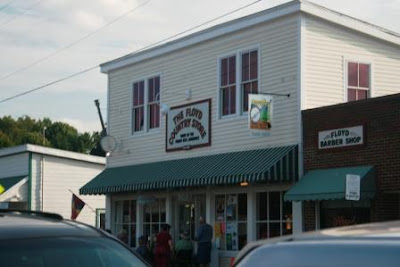 Way on top of Bent Mountain is a little town called Floyd.  On Friday nights, their country store hosts a Jamboree of bluegrass and gospel music which draws people from far and wide.
Last Friday, Paul suggested we go, and take the kids.  It's a bit of a drive, but a scenic one.  Once we got to town, we walked around. 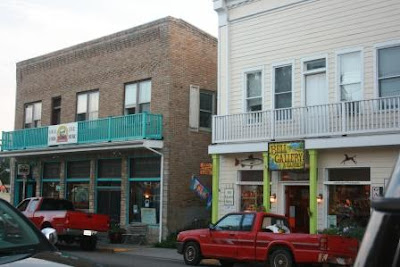 And eventually decided on Mexican food for dinner.  It was cheap.  Plus the boys like quesadillas and rice. 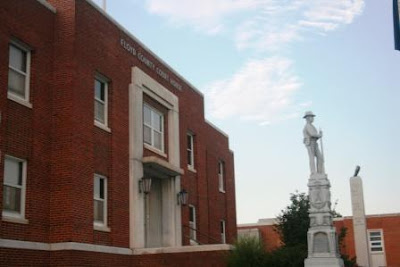 Now I don't know what happened between dinner and "the aftermath", but I'm suspecting that the salsa was spiked.  Because our three sweet little boys went haywire crazy.  They were hyped up like we'd never seen them!
It was standing room only in the Jamboree, but I couldn't even take the time to get a decent picture because the boys were all over the place. 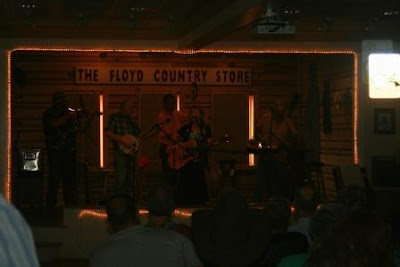 They were trying to pull brooms and canes off the wall. 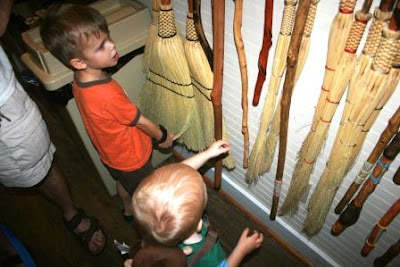 They were really insistent on some barrel diving....but I wasn't about to give my little hooligans any candy at this point! 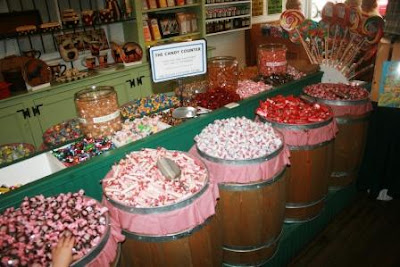 We lasted 5 minutes in there.  Seriously.  FIVE MINUTES.  Then we cut our losses and ran out the door.  Luckily, there is still plenty to do in Floyd on a Friday night.  In fact, we checked out little artisans booths... 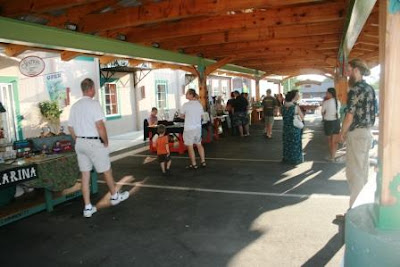 And listened to many of the little bluegrass bands that were set up outside.
When we were walking around, Reid opened the door of a car (apparently no one locks their doors in Floyd) and jumped in.  And he was on a LEASH!!  Fast and sneaky!
Just look at the 3 of them.  All over the place.  You see what I mean?!?  Spiked salsa indeed! 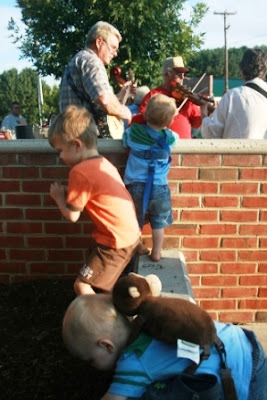 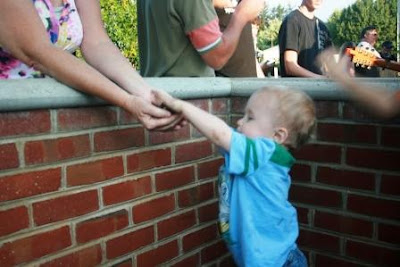 Dirty little feet, after shoe removal and rolling in mulch... 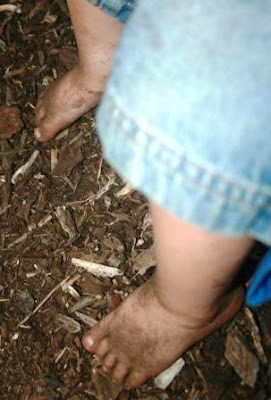 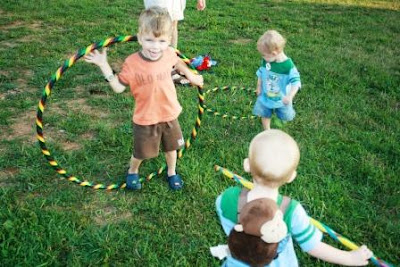 Paul and I were wiped on the drive home.  I felt like we had weathered some sort of family natural disaster that evening.  We laughed about it.  And then I made him promise never to bring up Friday Night Jamboree for at least three years....

That kind of exercise is good for the mind and soul!...:)JP

I don't know what it was Lisa - but I want some!

I am laughing so hard! I am sorry I know it was tough living through the boys night out, but I can so see JDanile playing in the dirt. He would have been covered.

Spiked salsa!! Bahaha...
but -- looking at the pictures -- you might be right!

I love the hula hoop field! How cool is that!

Oh my gosh! I couldn't help but laugh out loud at this one. You boys are so cute (and busy). I can just imagine how tired you were. Did the boys settle down in the car? I hope so, for your sake.

On a side note...what a fun little down!

Oh Lisa, they were on a big adventure! So many new things to see. :-)

I know it probably wasn't funny at the time but ...it gave me a giggle this morning!

What in the heck? It was definitely spiked! That is so hilarious to me though!

laughing my butt off here! my that must have been exhausting! LOL!

That's the joy of little boys!

HAHAHA! I know it wasn't funny at the time, though. Your boys are so precious. Love the dirty feet photo! :)

I'm laughing at those handful of dirt to friends!

I think that you are wise to wait for a while on Friday night Jamboree:) So cute! the pics

You and Paul deserved something spiked after that! But thanks for giving me a good laugh too-giving dirt to random strangers! What a hoot!

Hahahaha, Those little boys of yours were going to make sure they kept you on their toes.

So, after all that.. Did they sleep well?

Ha! So funny. Love the handing dirt to strangers.

That is so funny! Reminds me of our 1st family vacation. You can read it here. http://alextracieandtheweeones.blogspot.com/2011/03/bear-lake-our-first-and-last-family.html

This is just too funny for words and has given me a good laugh!!! Just when I needed one most. I love the gifting of the dirt! This looks like a tiny town with a lot of cool things to do. I love those barrels of candy. Is it closer to me or further away? If it's not too far, I may go.

Haha! Sounds like a fun, crazy night! I hope the boys slept as well as you did!

Was it a full moon too? My boys have been acting a little kooky lately too!!

you make me wish we had things like that.

Here -- have some dirt! Why thank you little boy. Where are your parents?

Haha! Love this. And I thought I was the only mother with little boys that acted crazy in public. Not! :)

I laughed out loud at your commentary...sounds like a TRIP!

Poor you! I've heard some recipes call for a lot of sugar in salsa? :)

It's a memory the boys will cherish I bet!

They were really on a roll weren't they?

So funny! Cute pictures :P
The kids are so cute! You must be exhausted haha

What a cool deal! Looks ike fun. Did your lttle ball of energy sleep well that night? :)

I enjoyed that! I just found your blog by way of The Blue Ridge Gal. I just moved to Va from NJ and I work in the town of Floyd. Its a unique little town.
Teresa

Looks like Floyd is a neat place though.
Hugs,
Betsy

Too funny. You are always having so much fun!

Hahaha...oh funny!
Spiked Salsa!
But it sure made for more good memories;)

That's hilarious! It definitely reminds me of some of our outings. Glad you made it through the disaster.