All Hot and Bothered - Jalapeno Jelly

A few years ago we received a jar of jalapeno jelly from Paul's aunt.  Spicy yet sweet, the jelly was delicious on tortilla chips, or spread on crackers with a little cream cheese.  I haven't stopped thinking about how good it was, so I decided this year to attempt to make our own.

Jalapenos are in season right now, and I found them for 99 cents a pound.  I had wanted to grow our own, but when the time came to plant peppers this summer all the jalapenos were sold out, and I ended up planting serrano and Big Jim New Mexico peppers instead (both of which are doing well). Still, no pepper can really compare to the flavor of the jalapeno.

I used 12 jalapeno peppers and 2 green bell peppers (from our garden) to make the jelly, along with 6 cups of sugar, 2 cups of cider vinegar, and Bell brand liquid pectin (which includes the recipe that I used).  I got all of my supplies ready first, and then asked Paul, "Hey, do we have any latex gloves?" after searching all the usual cleaning supplies cupboards.  It turned out that we did not have any gloves.  So I took a big gulp and jumped into deseeding 12 jalapeno peppers in bare hands.

Once you get them deseeded, you just pile them all in the blender or food processor along with the half the vinegar, and give them a whirl. 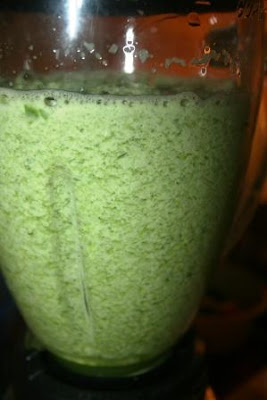 Then pour it into a pot with the rest of the cider vinegar and the sugar and bring to a rolling boil for 10 minutes.   This stuff got to frothing and in record time became like a science experiment gone bad.  I couldn't get it down and as a result my stove got slimed in burnt jalapeno froth - nice.  It took much scrubbing and even a razor to get the mess off. 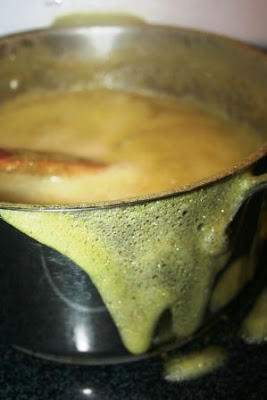 By this time, the jalapenos had saturated the air in the house, and not only was I coughing, but anyone who walked through the kitchen immediately began choking on the spiciness of the peppers.  Not only that, but my hands (which I had diligently washed numerous times already) were on fire from the deseeding.

Luckily, all I had left to do was add the liquid pectin for a minute, and then pour in hot jars and process for 15 minutes in the canner.  By the time I finished that plus the cleanup, it was dusk. 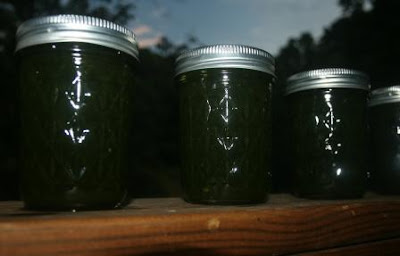 The next morning, I was thrilled to find that my 6 jars of jalapeno jelly had set up perfectly.  And they taste so good.  Even the twins are going crazy over the spicy jelly on tortilla chips.  In fact, we're all so fond of this delicacy that I've decided to make another batch - or even two.  But after spending a night with hands-on-fire, you'd better believe I'm going to invest in some latex gloves first! 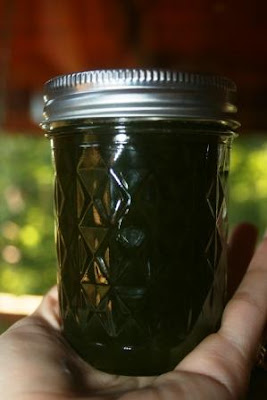 Jalapeno jelly is so good! I can't keep it. Last year I gave a lot as gifts as family members were requesting it :O). I gave some to my sister and her first words of response was not "thank you" but "How many jars did you bring me!" LOL... I laughed and said your Welcome LOL we still laugh about it.

Oh no! I don't believe you handled all of the peppers without gloves.

That jelly looks delicious and I would love to mix it with sour cream and use it as a dip!

I have never tried jalapeno jelly. I really should because Hubs loves things like this.

I did dry and make some hot pepper flakes. The same thing happpened... I coughed and everyone else who came near coughed.

I love Jalapeno's but have never tried the jelly before. Very nice images of you laying everything out and explaining how to make it. Good job Lisa. Richard

It looks so pretty in the jar. I can't imagine how much your hands must have hurt.

Oh Lisa, bless your heart and hands! I can only imagine how your hands felt.

The jelly looks fantastic though!

That looks great! I bet it would be fantastic poured over some cream cheese and spread on crackers. I will have to give it a try.

I'm thinking cream cheese and crackers...an oldy but a goodie!

I admire your fortitude. I'd look at 6 jars and say "to heck with this! I'm buying it from the store from now on!"

my husband loves this stuff. thankfully he usually gets a jar from a friend. :)

I love it on ritz with cream cheese.

Good grief, what a cooking adventure!!! I think you should do the cooking and Paul the cleaning up!! Amazing that after all this, they still turned out so good!!! But now that you know what to expect, it should go a whole lot better. Look out, Bobby Flay!

This is the. best. stuff.
I love it with cream cheese on crackers! Thanks for recipe :)

I love this stuff! I made some and gave it away at Christmas as gifts.
You know-it being green and all.

I'll bet that stuff tastes SO GOOD! A little hint - next time wear some medical-type (powder-free) gloves during de-seeding. ;)

I've never had it, but am sure the hubs would love it. Yes - WEAR GLOVES girl. sandie

You know, I have some jars of this in my cupboard but am afraid to try it. Yours really looks great!

Lisa, I have to say, I wish I was on your Christmas list! :) I LOVE jalapeno jelly! Yum!

Ha! I learned also that before I make Jalapeno Jelly I first take my contacts off, put on gloves and wear a respirator gas mask that I got from the hospital.--I'm quite the sight! Your jelly looks wonderful :)

I'm impressed! And I think that all of the trials you endured making it will make it taste all the sweeter! I need to make some now:) (And get myself some latex gloves!)

to be honest i don't think i ever had jalapeno (maybe by accident and i was unaware of it) but i can really see you standing there in the kitchen with that spicy smell!

I'm glad your happy with them!
Leontien

Oh they turned out so great! I really admire you for seeding them without gloves! I would have probably been wimpy enough that I would have waited and gone to store and gotten gloves first!!

I like this pic journey and it looks yums! I have never tried it though

LOl! I think I may leave this one to the experts. Though I may have to buy some. You make is sound so good!

I'm following you back!! I'm excited to have you as a swap partner!! Sorry I'm just now getting back with you!! I was a busy week last week.

Ouchie! I hope you hands are feeling better today.

My hubby would love this. Thanks for sharing.

I keep coming back to this jalapeno jelly. I like Jalapenos some, I like them on an omlet.
I wonder if I could handle the jelly.

We have never heard of jalapeno jelly! But it does sound good.
We had some jalapenos growing,, and we cooked them with grits. We learned the seeds are hot
love
tweedles

I'm making this jelly this upcoming weekend but I had learned last year to wear gloves. UGH. I'll keep you posted. :)

This is one jelly that I've never tried tasting and have honestly been scared too, haha. I may have to buy some at our local farmers market to try some. If I like it, I will definitely use your tried and true recipe. Thanks for sharing!

Lisa! I literally gasped when you said you cleaned all those jalapenos with no gloves. As much as I love jalapenos I have never been a fan of jalapeno jelly. Glad it turned out good for you though.