Alicia hadn't eaten in the 48 hours since Joe broke up with her, but she was on a manic high from the 24 pack of Mountain Dew she'd consumed during this time, the caffeine and sugar pulsing through her veins as she struggled to imagine life without her other half.  At first, she just laid in bed listless, waiting for him to come back and tell her it was all a mistake, that he hadn't truly fallen for the bubbly, blonde Julie that worked beside him at the new multiplex movie theater off I-10.  Hours passed and the clock ticked and no one came knocking at the door.  Alicia's roommate Teri had been in and out, but when Alicia had collapsed on her sour comforter in a pool of sobs Teri hadn't known what to do, patting her on the back and telling her it would be okay; that she'd meet someone else.

It wasn't okay and Alicia didn't want anyone else.  Alicia wanted him back.  She had to do something.  But first she needed energy.  Tired of Mountain Dew, she stood in front of the open fridge.  Food didn't appeal.  She grabbed a Zima from the veggie drawer, and let the bubbles course down her throat as she returned to the cave of her room.  She put on Guns and Roses, letting Use Your Illusion 1 fill the room, giving her company and lighting her anger.

Then Alicia grabbed her most cherished possession.  A pair of Gap jeans - the new boot cut style - a total splurge.  They fit her like a glove, and she'd sacrificed two weeks of Friday nights out to buy them.  When she wore them, they made her feel like she wasn't her usual fashion dunce self, instead she was sexy and hip, especially when she wore them with her cherished Pink Floyd concert tee.  With the Zima warming her starving belly, Alicia kicked off her Doc Martens and grabbed a permanent marker from the desk. She laid on her empty belly on the floor.  And without a second thought she started writing.

It doesn't take long for memories, Alicia's memories with Joe, to coat the jeans.  She writes madly, furiously, more and more memories from the two year relationship coating the smooth denim surface.  Eggplant parmesan.  Star Wars.  Midnight madness basketball.  She can't stop.  Hours she lays there, writing and writing, the memories rocking her body even as the second Zima spins in her sprinting mind.

When she's done, her jeans aren't blue jeans anymore.  They are black.  Alicia has coated every inch of surface, and she can't even read most of the words anymore, for the layers of memories piled over them.  She puts them on.  They still fit perfectly.  And now?  She is branded by Joe, like a horse by the sizzling hot iron, his mark permanently, painfully visible on her flanks for all to see. 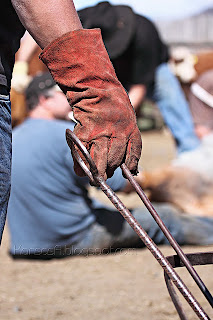 Image from Google
The prompt this week:  Jeans. They can evoke so much emotion in us: the hot jeans we wear on a date, the skinny jeans we can finally fit into, mom jeans we vow never to wear, the comfy jeans we’ll never throw out.
The assignment this week is to write a piece – fiction or creative non-fiction – in which jeans play a prominent role. You can even write an ode if you’re so inclined

Wow!
The imagery, and the language grabbed me from the first sentence!

That is a neat idea for a prompt!
:)
I can't wait to read more of your writing!

Wonderful,Lisa! I am so excited to be reading your fiction again. You are gifted.

Well done! I love the image of a hungry womens feeding off past memories.

now that's a creative way to spill your guts... :)

Lisa!! When did you say your book was being published? :-)

Compelling story. The way she used her jeans as a conduit for her emotions regarding him. Spilling out everything in such a manner may seem far-fetched, but in reality, would be a step toward healing. Very nicely done!

Wow! When I first started reading I had no idea it was going where it did. Even as she was writing on the jeans I thought she'd just burn them or something. Branded- wow what an interesting pice. Can't wait to read more of your stuff.

Ooh. I liked it. The symbolism of being branded was visceral and, I dare say, provocative.

Lisa-this is stunning! I love all of your writing, but this one is so good! The imagery of her jeans going from blue to black captures her situation so well. I feel burned right along with her.

What an incredibly interesting spin you took with it! I love how the memories poured out of her.

What a cool idea!!! And she also made her own designer jeans!

Sometimes I feel like those jeans of hers...but it's all been worth it!...:)JP

Holy cow!! Did you write that? I thought I was reading a chapter of a book you copied for some reason.

I love your fiction writing too! You have a talent for it. This brought me back to my single days.

I love reading your short stories, Lisa (although I rarely comment).

Writing on jeans though - sacrilege!

Wow! I wasn't expecting this at first. I had to re-read it to make sure I got it the first time.
P.S. I used to drink Zima ages ago in college...I forgot about that until just now.

Lisa I love it!!! It is wonderful. I too can not wait to read more:)

I have an award for you on my blog:)

whooo great story! Like the me form and then the she form (sorry don't how to pronounce or explain it better)!

Hope you have a great week
Leontien

I love it! The jeans tying in to her memories. And the moments. Ah, the moments of a break-up when all the memories pour right out of you. The only thing that had me chuckling was the Zima drinking. How I remember those - but do they still make them? It was more of a flashback for me because of that - which would only come into play depending on the *rest* of the story, if there is one. I love the branding aspect and the way she branded herself with her memories of him. Well done!

I know it's a lame comment. But wow. Branding her clothes, sacrificing her beloved jeans. The youthful intensity in this is great.