We've been going to the pumpkin patch every year since Pierce was just a year old.  This year was no exception, but this was the first time I've gone without backup - Paul was running a race that day.

Pierce wanted to do the corn maze first.  The lines to get the maps were long (actually, the lines everywhere were long) so I had this idiotic bright idea that we could just skip getting a map and go on in.  Forty five minutes and two screaming two year olds later, we emerged from Phase 1 of the corn maze.  Needless to say, we didn't go into Phase 2. 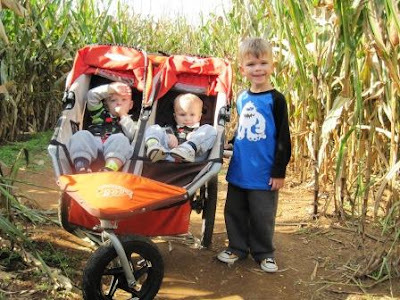 Then Pierce wanted to do the cow train.  I had the lofty idea that the three boys could ride the train while I snapped pictures.  This didn't work out, as Cort and Reid started screaming as soon as I got them in the seats.  So I climbed into the tiny cow train barrel and the twins piled on top of me.  Have you ever sat in one of those barrels?  They are not exactly spacious.  But we survived, and I even managed to snap a picture of Pierce, who sat in the barrel in front of us: 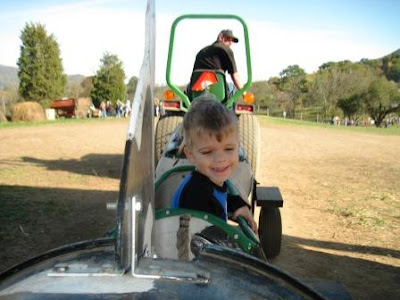 Of course immediately afterwards the twins wanted to go again.  But we settled for tire swings instead: And tire climbing.  This is one of my favorite pictures of all 3 boys from the past year - 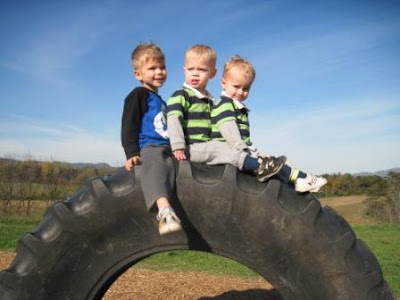 After that, it was on to climbing spiderwebs.  We had to evacuate after Pierce, caught up in his role of spider, told a little girl he was going to sting her and I quickly whisked him away before he went in for the bite. 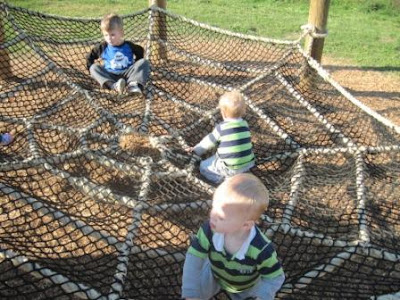 The mini corn maze is one of the favorite parts of the pumpkin patch.  It's short and designed for small kids.  Two years ago, Pierce ran through it over and over again.  This year, Reid was Pierce reincarnated.  I caught him making the run from one side to the next, and with the rays of the setting sun on him he kind of looks like a little glowing corn ghost, doesn't he? 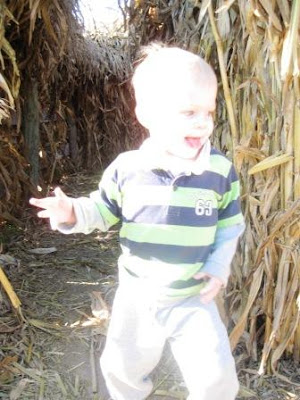 The corn crib - always a good place to get corn into tiny crevices for the next two weeks or so... 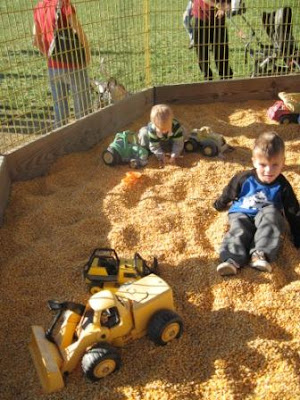 And finally the jumping pillow.  Pierce is front and center.  He didn't stay on for his full 10 minutes because he was focused on getting some kettle corn.  The line for the kettle corn took 30 minutes.  As you might imagine, that did me in. 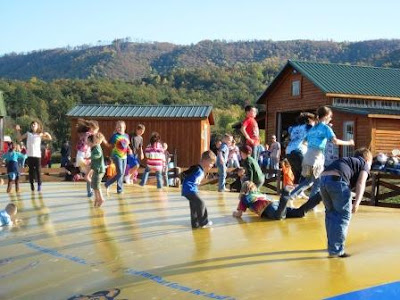 We took our kettle corn and called it a day, munching happily the whole way home.  What's your favorite part of the pumpkin patch?

Be sure to enter my giveaway for BumEase diaper rash spray here!

You are such a good Mama to do this on your own but your tale of the day was so entertaining! I'm sure the boys will remember it for a long, long time.

Wow I have never seen a pumpkin patch like that ! Remind me not to show these pictures to my boys !!!

This patch has so many wonderful activities! I love the spider web.

Love all the photos! Those are lucky boys :)

Aww man our pumpkin patch doesn't have all that.. I feel jipped . Your boys are so adorable.

We love th pumpkin patch. Yours has some really neat things for the kids.

what a great pumpkin patch!!
when the girls were little i loved watching them climb the hay bales (still do actually). it ALL is so much fun : )

you got some great pics of your boys too.

I'm glad you all had some fun times (despite the meltdowns).

I haven't been to a pumpkin patch in years but when I went years ago, they would charge you $10 for all the pumpkins you could carry out of the field in one try.... no going back. It was fun to see who could carry the most.

The last time I was in a corn maze, a dog had been there before me and I was the lucky one who tramped in dog poop. Yuck!

Love the pic of Reid running out of the corn maze. My 18-year-old is still going to those things. Such fun...when the kids aren't crying!

Loved the stories--now that's a fun pumpkin patch! That picture of your boys on the tire is so cute. I'm glad there was no stinging. :)

Looks like a very fun time for the kiddos. What a great set up they have at this place.

too cute, but yes, i can imagine you were exhausted!

My favorite part has to be picking out my very own pumpkin!

Thanks for sharing your adventure here-so many great pictures of your three little goblins, and stories to go with them. It's made my day:)

What a fun day you guys had! You are such a good mom...and, those boys are the cutiest! Thanks for sharing your day...have a wonderful weekend! Hugs!

This is a great memory for yall...I see why it is one of your fav pics of your boys! It is so cute

We haven't gone this year, yet. I'm a little sad by such things...

I really don't miss field trips with my boys as toddlers. But your post reminds me that that's normal for the age, right?

Looks like a nice one - a bit better then ours. One family got lost in our corn maze and had to call 911. Take a pole and a flag next time the news said. Good idea.

Those corn mazes look like a lot of fun, and we have a good amount of them in my area. Looks like the kids really had a blast!. Richard

Hooray for pumpkin patches! My dumb friends and I went to our local one at night to go thru the corn maze. There were no maps. We were never seen again......almost!

For having no backup, you did marvelous!! And managed to get great pictures, too. I think you have learned to be a top notch multi-tasker! Gosh, I don't think we have anything this elaborate here. I love the pic of the boys on the big tire, and the spider web story is TOO funny!!! No matter what happens, you write with such a wry sense of humor, you always make me laugh. I got a letter in my e-mail saying that my e-mail delivery had failed, and it showed me my comment from your last post!!! Did you get my comment? Weird, because it was on your blog, not through e-mail.

Oh wait, your comments go through your mail!!! I hope it isn't messed up?

You are one brave woman to do that on your own....or maybe crazy. Looks like the boys enjoyed themselves though.

Ha! I just finished putting together my pumpkin patch post that I'll publish in a couple of days. I too went without my husband! :) You have lots of neat things there. It would be fun to take the kids to a different one!

This looks like such a fun (although tiring) day out!! Cute pics, and yes the one of your 3 boys sitting on the big tyre is pretty cool :)
I bet they were all worn out by the end of the day!
Enjoy your Halloween :)

Btw, I forgot to say that I'm your newest follower!

Oh, you poor thing! I laughed about the corn maze fiasco -- sorry!

i am exhausted just from reading!! this must be done when you are young and somewhat able to keep up.

they are cute and i am glad they are yours!!

i posted a picture of the cupcakes today....if you want to take a peak. imagine my spider-web cupcakes with your rings, that was the plan!!

How brave you were to do that on your own! I bet Pierce is a helper though. I also be they slept really good later : )

Great pictures of the pumpkin patch! I laughed out loud at your very truthful thought on how the corn play area will be "around" for weeks to come! Been there, done that!

Hey, I want to go to your pumpkin patch! Ours was fun, but we didn't have a jumping pillow or giant spider web. Awesome.

Wow! That is one great place to go to! My kids would love that place. Thanks for taking us on your adventure alone with the boys! You were very brave girl to go it alone!

It looks like it was wonderful fun, even if there were a couple of challenging moments. (You were very brave to do this alone!) My favorite part of the pumpkin patch is seeing the pure delight on the faces of the little children. :-)

I know the children had a blast.
It showes you have patience un-ending.

Great pictures! I love that one of them on the big tire. I completely TOTALLY could relate to your going at it alone. I have to do that all the time & man oh man does it wear you out. Luckily my hubs got to go this year, saves my sanity for the next 3 events I have to go alone. LOL.
I agree, a little sunlite ghost for sure :)

I agree great pictures! It looks like such a fun place to go and that picture of all three of them on that big tire is just adorable!!

This post made me laugh. It's fun (and busy) going on outings like that alone huh! Looks like a great annual tradition to have. Love all the pictures!

The pumpkin patch trip looked like so muuch fun! The photos are aforable!
Making memories to live in the heart forever,,,thats what we do to.
My mommy takes me to the pumpkin patch. Can you imagine?
love
tweedles

Great pictures! We love going to the pumpkin patch too! SO fun :)

You were brave, I still am not good at venturing out with both kids to an event on my own.

Love that shot on the huge tire!

Lisa:
I am having problems with gmail but I want you to know how much I appreciate your comment on my blog. You are very kind.

That looks so very cool! I like the big spider web thing! Great photos!

We took our grandsons to Jeter Farm a few years ago and they loved it. Petting zoo, hay ride, pumpkin patch to get a free pumpkin and also the corn maize. Really enjoyed ourselves!

Cute pictures! I don't think I could manage the pumpkin patch alone. Way to go!