She's Quite An Influence on My Son

I knew when Pierce started a daily Pre-K program that he would be under the influence of other kids more.  I figured he'd come home wanting to watch Star Wars and have light saber battles.  That he might start talking about wizards and magic and asking for a pet owl.  That there might be, at worst, fake shooting and (ungranted) requests for toy guns.  But the influence he fell under was completely unexpected.

The teachers assign the seating on the front of the bus for the younger kids, and Pierce's seat mate is a kindergartner named Jayden.  I've never met her, but Pierce is completely enamored.  Everyday he comes home with stories about Jayden.  It all started with her cell phone.  See, Jayden has a real pink cell phone (according to Pierce).  A pink slider cell phone.  She's 5.  And now all the sudden my son says he's sending me emails on his phone.  He's four.  He never even knew what an email was before!  Jayden doesn't let Pierce play with her real cell phone, but sometimes she brings her purple play cell phone and let's him play with that. 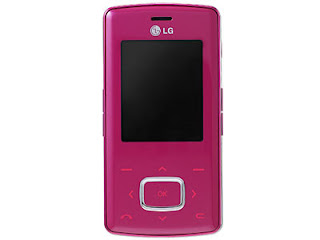 Image courtesy of google
Next thing I know, Pierce gets off the bus and announces, "Jayden shared her snack with me on the bus!".  I said, "I didn't think you were allowed to eat on the bus.  What did you have?"  Pierce is bouncing his backpack, totally hyped up, and says, "I had a tootsie roll!  And goldfish crackers!  And fruit snacks!  And string cheese!"  And my first thought was, has that string cheese been sitting in her backpack unrefrigerated all day long?  And my second thought was, guess you won't need to eat dinner.  So now that I'm up for worst mom of the year award, for not sending bus snacks for my child, I have to try to redeem myself by sending double snacks so that Pierce can share with Jayden.  Only I can't bring myself to pack things like tootsie rolls.  Indeed, I pack healthy snacks.  As you might imagine, this doesn't make Pierce the most popular kid on the bus.  And the day I sent blueberry grammy sammies, Jayden outright rejected them.  Yeah, not sending those again.

Then last week Pierce gets off the bus sporting the HUGEST Winnie the Pooh sticker I have ever seen.  It's so big it wraps all the way around his hand and up his arm.  Wow, that's a big sticker, I tell him.  "Mom, Jayden gave it to me!  And Winnie the Pooh is MY FAVORITE MOVIE EVER!!  Can we watch it today?  Please?!".  Seriously?  Winnie the Pooh?  And here I was worried about Star Wars battles in my house.  Boy was I ever wrong.  But by all means, bring on the Pooh.  That, I can handle.  As long as the Heffalumps don't get me first. 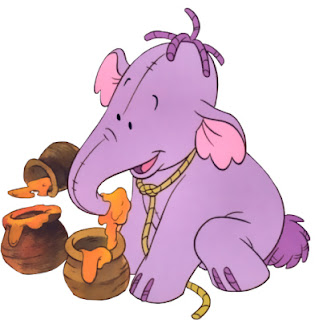 "Mom, me and Jayden have gotten engaged!"...

Bless your heart. It's all just beginning. I just have to say it...I can't believe a 5 year old has a cell phone! Geez!

Jayden must have a very full backpack. She has so many things to pass out and share.

What a crush he has. Wow! They start younger and younger.

My friend's SIX yr old had a smartphone long before any of the adults in our circle did.
Insanity, I tell you.

read Chris' comment and busted out laughing!!! :) good luck with that!

Keep away the cell phones. :) I am speaking from having a 14 year old boy. Those girls with cell phones create trouble. But it's so sweet to hear about Pierce's little buddy friend!

Glad Pierce is connecting there.

Our daughter's buddy is a boy who the kids call RJ. The Mrs. volunteers in the school cafeteria two days a week, and RJ came over and told the Mrs. that her daughter is the neatest girl in the school.

High praise from a little boy.

Just don't change what you are doing, Lisa! Peer pressure works on parents as much as it does on the kids. :)

That is actually pretty cute...except the cell phone thing. What on earth does a 5 yr old need a cell phone for?!

Amy was enamored with a little boy named Chance in the first grade. So much so that she told his mom she was naming her baby doll Chance. Chance's mom gave Amy a lecture about how that would damage her son's self esteem! A week or so later, Amy threw up at school-all over Chance. Poetic justice?

Hehe...hilarious! My 3rd child at that age? ...went up to the father of a really sweet "Jayden: and asked for her hand in marriage. WATCH OUT! It's a crazy world out there for those young sons of ours;)))
Sweet post Lisa...hope you're doing well- and have a wonderful weekend:)

Well, look at it this way, Baby Girl...at least he's met and Jayden with all the girly qualities and not a pistol totin' "Annie Oakley"!...:)JP

I have fallen in love with your story! Perhaps you can invite her over for some play dates or something? Maybe an outing next time you all go somewhere fun. Well, I have heard of first graders having cell phones. Not a bad thing really. There are ones for little kids, and you program a mommy button, so they don't feel so lost in a new big school and know they can talk to mommy any time. Maybe not pink for Pierce though...

My 3yr old, almost 4, yr old grand son has a high school cheer leader he has a crush on. She helps out when they need extra monitors for the children.

School - not just for reading and writing is it? Nothing like that first love. I still remember my first grade boyfriend.

I hope she never breaks his heart!

I'm afraid, Mom, you have a long way to go! Hugs

Thanks so much! Luv

Reading this I couldn't help but think about my son who is not even 2. This is my future. A tootsie roll pushing, Pooh loving cutie will steal his heart. :)

Yes it is just beginning. Things do influence our kids....but we seem to be a big influence in the long run

Yes, there are crazy parents out there that give their EXTREMELY young children cell phones. Not to worry if that is Jayden's only bad habit. You have reminded me of a great story that I belive I will do a post on soon. Thanks for sharing this wonderful romance story.

Wow! A real slider phone at five! Funny the things that make an impression on our little ones!

this is the easy stuff....trust me! it's a very long road....and it never really ends!!

children learn what they live so keep doing what your doing!!

That is quite the little friendship forming. Hard to believe how quickly they grow up! It's nice she shares. :)

Oh, he's so sweet! They are impressionable. But at least he's not asking for his own cell phone yet. I never tire of hearing your stories about the boys-brings back memories of when mine were little.
Happy, happy days!

A real cell phone? Wow!
So cute that he has been so smitten with her. I hear so many mommy vouchers write about thier kids being bullied, it was adorable to read that your lil guy is instead being wooed LOL :)

I can't believe that 5 year olds have a better cell phone than I have! I just have the little pay as you go phone because I get no signal where I live and I only need it for emergencies. I think it's crazy for kids to have cell phones!

I'm surprised the bus driver allows them to eat on the bus. My kids aren't allowed to eat on the bus here. I'm with you on the junk snacks. I don't do it. I do let my son have 2 cookies for lunch most days but nothing that is going to sugar him up so to speak!

Just yesterday my 7 yr old son said that a girl on the bus tells me she loves him! She tells him she wants to marry him! No way! Absolutely not! Good grief! I hope he doesn't fall for her when he gets older. Her family is nuts! I can't handle that! lol It's rough being the mommy!

You gotta love the influence of other kids! I can't get over the fact that she has a cell phone. What?!?

How well I remember life before cell phones! It seemed as if life was not only simpler, but we were forced to be more creative! Now it's tough to think of life without cell phones. BTW: I had trouble linking to your blog post above this. Have a good week!! :)

I remember those days too. Funny the things you thought would catch their eye-usually doesn't even show up on their radar : )

Not a parent, but I do think 5 is too young for a cell phone. Although I hate to ask, what the heck are blueberry grammy sammies?