There's ANOTHER Mouse in my Car!

It's a colony!  Maybe you remember last week when I blogged about the mouse in my minivan?  If not, go here to catch up.  Well, I caught the first mouse and I thought I was good to go.  But I had a sneaking suspicion.  I think I could feel little mousy eyes watching me when I drove.  I know what you're thinking.  Oh, but mice, they're just so cute.  You're getting all The Mouse and the Motorcycle or An American Tale on me, aren't you? 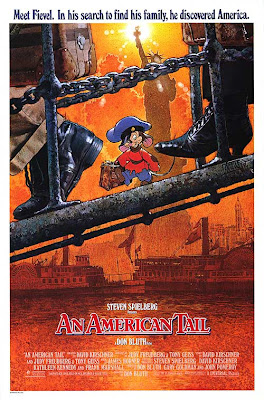 Well, trust me.  Fievel this mouse is not.  He's more like the Evil Knievel of mice.  He has a lot of tricks up his furry little paws.  He totally ignores the humane mouse trap I set.  So I put out another glue trap and baited it with Pop Tarts.  And a french fry.  Because I know he likes them - his nest was full of them if you remember.  So last weekend he got snagged in the glue trap.  But did that stop him?  Oh no.  He dragged the glue trap across the car to a floor based seat belt.  Then he used those wily little paws to scurry himself right off the glue trap and off to wherever he goes since I vacuumed up his nest.  And my seat belt?  Shredded. 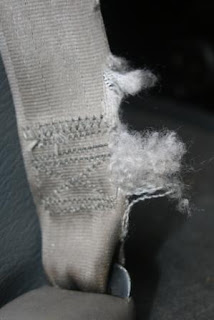 Luckily, it's not one that we're using right now, but we will be when the twins switch to booster seats in the future.  I'm guessing it'll cost me plenty to fix too.

I'm not sure I want to try my hand at glue traps anymore.  I'm thinking about sticking one of our cats in the car with a litterbox for the night.  It's either that or poison.  And somehow, I'm not crazy about the idea of having poison in my car - what with 3 little boys and all.  Anyone else got any bright ideas?

That's hilarious, Lisa (although it must be getting to you a bit by now).

Ok how's about this:

Make Mr Mouse a fabulous little house, all cosy and warm out of a little box filled with straw, old socks etc. and put it in the car. Hopefully he'll move in there and then you've got him. Just take the whole box out and let him go (somewhere well away from your car).

The cat idea will mean your seats will be shredded too in the morning...lol

Oh no! That is terrible! I always have the best of luck with traps with peanut butter in them. Have you tried that? Works like a charm for me. Good luck, Lisa!

Yikes! He must have been hungry to eat part of a seat belt.

Would the cat want to stay in the vehicle over night?

Ew. Ew. Ew.
I can not imagine.
We always bait our traps with peanut butter. Works every time. and we are not humane about killing them in the slightest. Because mice suck.

I do the same as Jill...traps with peanut butter.I hate the whole having to take their bodies out of the trap so I usually throw the whole thing away!

Yuck! Too bad it ISN'T Feivel! Or Mickey and Minnie!

Oh my GOSH!!! But on the plus side, this makes for dandy and suspenseful posting on your blog! I just showed Phil the picture, that is too bad!! I also would not recommend any kind of poison, especially with the boys!!! Your cat idea sounds good though!

Get him a driver's license. He might be more responsible if he had more privileges;)

Oh:( I KNOW the feeling! I just set traps every every few inches away from each other. It's awful when "someone" has entrance to your space and he's not welcome!

That sounds like something that would happen to me. I'd probably put a cat in there too, but it sounds like the peanut butter baited trap is the way to go... Good luck!

I'd go for the good old fashion "snap their neck" trap. as others have suggested, bait with sticky peanut butter. They worked the best when we had our mouse in the house problem two years ago.

I can't help you but I can sympathize - we have our 4th squirrel up in the attic - we have tried everything.

Wow, this could be the background for a low-budget horror movie.

Traps would be my only offering.

oh dear. dirt and crud is one thing; damage is another. good luck!

What a stinker! Hope you catch the little guy, along with the rest of the family that could be in there.

Ugh! Rats Lisa! I just don't know what to tell you there. I'd be wanting to trade it in! lol I had moths in my truck all summer long and I think I've finally gotten rid of those! lol Nothing like driving and having a moth fly into your face. I think my husband uses peanut butter to. The only time I have killed a mouse is with my trusty old BB gun in our old farm house. It wouldn't go in the traps and the dog wouldn't catch it so a girl has to do what a girl has to do! lol

Oh My...how do you stand it! I hate those little nasty critters.
A stray cat or two would take care of this for you! LOL

My van is such a wreck right now. I would not be surprised if there were mice in it.

mercy me... I am with some of the others I would use traps loaded with either peanut butter or cheese chunks.. I hate killing them too but well you gotta get them out of your car... I would do what Melodie said throw the whole trap and mouse away. Then you don't have to ummm well handle it. ewww

Wow! What a stinker! Maybe leave the door open for a while and hope he sneaks out???

Personally I would set an old fashioned mouse trap that snaps his neck! OK, that might sound bad, but they are destructive little critters and he has to go!

Yeah what Disney doesn't portray..Fieval pooping all over everything.

Awful and no good suggestions here. Regular wire snap traps didn't work for me..I had to use the plastic ones.

Before we had cats, I would put mothballs in the trunk of the car and hang a bag of them off the headlamp control in the truck -- seemed to keep them out of there.

What about the traps where they go inside and get trapped? Or am I thinking of roach motels? You do not want them getting into your wiring or insulation...

Mice cause so much damage. I just posted yesterday how I keep mice out of our cars and house.

i can totally sympathize.
good luck!

Every winter we are fighting these guys who want to make their home in our basement! Peanut butter on a trap. It works.

I had to deal with this in our last car. Ir kept getting in the wheel hub and even ate at the wiring. So I know how much damage they can do! We used poison-but no kids to worry about.
I use to use the water bucket for our old farm house years ago. Take an ice cream pail, place a peice of wax paper or newspaper over the pail and secure with a rubber band. Then cut an X in the middle of the paper. Smear a little bit of peanut butter on the area where the X is cut. Now place a ruler from the floor to the pail (this is like a gang plank)for them to run up. Then when they try to lick the pb they fall in and drown. Be sure you have enough water, but not too high. It worked for me everytime!
Good Luck.
PS We even did this to catch a skunk in our garage. We used a garbage can though!

Darn mice! Mice won't stay around if they can't get their basic needs met - ie food and water. But any little crumb dropped by the kids will satisfy the food issue. And mice can and will be VERY destructive in seeking out water. They will eat the hoses, etc in your engine to find what they need.

Other than a serious 'neck snapping' trap, I have heard of using moth balls or peppermint oil to repel them. They don't like such strong smells.

my vote goes to the cat....that is one stinking, dirty mouse!!

and one smarty pants also!!

Capture it an sell it to the circus. This is one smart and calculating mouse. Too bad about the damage. This is horrible.

Oh my! What kind of mice are you growing over there? Please just don't them my way ;)

Oh no! I can't believe he escaped. I like your cat idea, though I wouldn't be surprised if he eludes the cat as well. Good luck!

I have no sympathy for the mouse...I'm all about poison and snapping his neck to get rid of it. We had them in our old house..in the attic and walls...dealt with two exterminators who finally killed the alpha male with poison...I'd rather them be dead than get my little boys sick...we used peanut butter and slim jims on the traps...good luck!

Oh dear. Poor little Mousie. I guess if you have to kill it do it fast, not the slow glue way. But, if you put a trap in your car you are going to get mouse guts splashed all over the place.

Here is a song for you...
"Somewhere out there, beneath the pale moonlight,
Somone's thinking of me..."

Ohhhhh no! What a little stinker that mouse is shredding your seat belt. I had to have one of mine fixed one time & it was around $100. I say put the cat in the car LOL :)