If you've been reading my race reports for a while, you know I've had a discouraging year.  Coming back from injury (and, for that matter, having twins) is hard.  I almost didn't run this race, but in the end my friend Steve talked me into it by telling me what a fun and fast race it was.

I picked up my race packet and walked back to my car, where I sat for a while trying to warm up.  It was a misty and cool morning, which was bad for waiting but good for the running part!  The race packet had one of the oddest hodgepodge of goodies I've ever seen.  I mean I don't typically get a dog treat in my race packet.  Luckily, I also got a toothbrush, so at least I could brush my teeth after fueling up for the race with a dog biscuit.  Okay, so truthfully I saved the dog biscuit for Scooter, who really loved it. 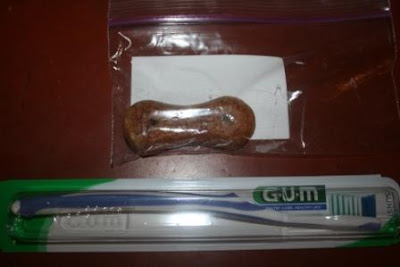 The race started right on time.  I went out fast and tried to hold.  The mist was so thick you couldn't see much at one point.  I loved that!   There were no mile markers and I didn't wear a watch, so I just ran by heart.  The course is really quite flat - there are some small grades but nothing that could actually qualify for a hill.

At the halfway point I kind of realized I was the third female.  And that there were two other females on my tail, so I'd better hold strong and push if I wanted to hold my lead.  I was hoping the two females behind me weren't planning to run a negative split, because I knew I couldn't go any faster.  Getting an overall award is really rare for me, as I'm not very fast, but if there's an opportunity it does motivate me to perform well.  Luckily, this race I didn't have anything holding me back - no asthma, no nausea, no side stitch.  I just felt great and I dug deep and ran.

I was thrilled to cross the finish line in 23:20.  That's not a PR for me, but it's a significant improvement from where I've been. The race may have been short - I wouldn't be surprised because I was really expecting to run in the 24 minute range.  But the one lady's Garmin I checked did say 3.11.  And in the end, I was the 3rd overall female, so I got a very nice plaque plus two $15 Road ID gift certificates. 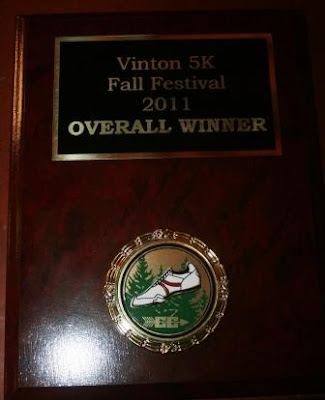 While it's always exciting to get an award, I care a lot more about my performance in comparison to myself (because really whether you get an award or not is just based on how fast the other people are who show up for the race on any given day!).  And regardless of whether the race was short or not, I feel like I ran strong and I felt good during this race, so that's a great boost for my running self-confidence, at a time when I need it.  And now I have to decide if I want to try to attempt the 10 miler later this month.  I'm still on the fence, as I'm really not trained for it.  Ha ha, I guess we'll all find out in a few weeks, huh?

Alison Hart contacted me yesterday and said that she was thrilled with the response to her book giveaway, and she would be happy to give away two copies of her book!  So hooray for two winner, and thanks to Alison!  The winners of Alison Hart's book Risky Chance are Valerie from For the Love of Pete and In the Hammock Blog.  Congrats to Valerie and In the Hammock Blog, and thanks so much to all who entered!

Congratulations on running and placing! You did a fantastic job and should be so proud.

Also, congrats to the lucky winners of the giveaway.

Congratulations Lisa on the award! 23:20 is a great time for a 5K - get some runs in for me. I will hopefully be out there on the road again in the not too distant future :)

What interesting treats to get in your packet! It sounds like you are back on track!

Way to go! That is just awesome!!

The dog biscuit and tooth brush are hilarious! Way to go on your run!

I would say that coming in 3rd is pretty amazing. I know you would want to be first... but I think you did GREAT!!!

There are so many reasons there - that you are a WINNER! Congrats and love your plaque! sandie

That is strange that they gave out dog biscuits! Maybe it was supposed to inspire everyone to run faster-like greyhounds!

Lisa, I'm thrilled I won your giveaway! I want to thank Alison for being so generous, and you for hosting it! My nephew will definitely love the book:)

Congrats on your great run!!

congrats to you lisa, you are a winner in life!!

and congrats to the book winners, that was a wonderful give-a-way!!

woooooowhoooooooo!!! You go girly!!!! I am over here doing the happy dance for ya!! Congrats!

Congratulations!!!!! What a wonderful way to kick off the fall season! That dog biscuit does look pretty good. Ha ha...and with a toothbrush. Too funny.

hey, congrats on holding off the other encroaching women who were running behind you to keep your 3rd place finish!!! that in itself is worthy of awe from me!!!

Congrats on your finish and overcoming adversity Lisa. That says lots about your character. It would have been easy just to quit when the injuries were mounting.

So glad you had such a great run. It would be spooky with all that mist for me, but I would like the coolness for sure. You did so well. Congrats on the award!

dude. coming back from injury is horrible. i have to keep telling myself that it's okay to not be as fast as i once was - and to just enjoy the run.

though. in this weather, what's to enjoy?

THAT IS SO FAST! Congrats on your run time!
And congrats to your book winners:)

YEAH!!! Another congratulations, Baby Girl! I don't think I'll have any clebs in the new neighborhood. Now that I think of it, I really don't think there is even a neighborhood!!!! I wonder if we'll be the first settlers?...:)JP

Wow, you GO, girl!!!! I am so proud of you! I can barely walk, let alone run, but I can do it vicariously through you!!! Seems like conditions were perfect, too. Fall must be the ideal time for running. Now where are you going to hang that plaque?

Congrats on running the race!

I have twins too - boys. They're 24 yrs old now. What a blessing. I learned that you don't divide your love...you multiply it!

Congrats on the placque, Lisa -- I that that's great! And congrats to the book winners as well. :)

3rd place. That is something to be proud of. No one can ever take that away from you.

Together We Save said...

Congrats!! Your placque is great!!

I just love your attitude and drive. Funny, how I was just thinking today how long it took me to recover fully from having twins. And then realizing I never did.

Hmmm maybe the dog biscuit had lots of protein in it??? LOL

I get this. I so get this. And I love that you're so good with the "running against myself" thing. Because I'm not. I'm all about the hardware. Sad, but true.

Congrats!! Sounds as if you are just a wee bit competitive....I think that is a good thing.

I love the gifts they gave you. Never seen anything like that! Congrats on just having a great race.

Congratulations. That is really awesome.

I think you did great! And I have to say, the dog bone in your race packet is really random!