The Reid is in Da House

You know what I love about 2 year olds?  How egocentric they are.  It's what earns them the 'terrible twos' moniker, and I find it oftentimes hilarious and endearing. 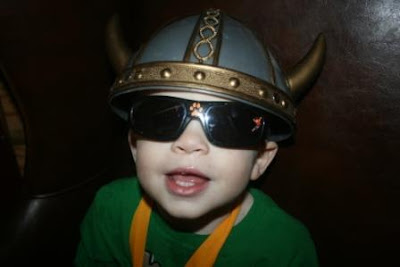 The Reid is now signing copies of his official, licensed novelty poster for tweens across the nation.  To order yours, just call 1-800-THE-REID.  Viking warrior helmet not included.

Ha! Very funny. He must have his mom's sense of humor. :)

Haha great post I'm going trough the same thing. Oh by the way how many cookies did you eat don't fib either

The REID looks just the Reid's older brother and the Reid's daddy in that picture.

Do you get the glasses? With those I would be The JDaniel4's Mom.

Yes that is such a fun age!

Haha! So funny! I think I will start referring to myself in the third person:)

That's awesome. JBird has only done the third person once.

I know how Reid gets away with it-he's so darn cute!

And at Amy's high school? There are a few incredibly egocentric teens. Not cute at all!

LOL! what a character!

Is that cute or what! sandie

this made me giggle out loud. Tweens is right. I burst Genny's bubble the other day by announcing she isn't the only person on the planet. She seemed shocked initially, and then an expression of disbelief took over...

How adorable! Whenever I hear someone refer to themselves in third person I always think of Bob Dole....he did that. It drove me nuts to see his ads on TV.

The Reid. Love that!
We have the same helmets at our house!

I am laughing so hard!!!! This is one of the funniest posts I have ever read. And let me say it is no small feat to retain such a joyful sense of humor with three little children running around!! Phil has gone off to his computer now, because I told him to read it. I can already hear him laughing from all the way down the hall!!!

That is SO funny! What a little character you have on your hands :)

THE Reid is ADORABLE... What a cute picture and post, Lisa... Hope you are writing all of the funny/crazy things that your kids are saying.. Might make a good book sometime.

Kids can be a trip,lol. Cute post Lisa. Richard

Haha! The Reid is a cutie pie!

Reid is too cute...2 year old kids are adorable.

The Reid is too, too funny!

What does Cort say about "The Reid" bening so egocentric? Love the helmet!!!!...:)JP

Lisa
Great job you're doing there; Reid is definitely not lacking in confidence!!
The photo is adorable. Does he by any chance have Viking blood?

So funny - The Reid sounds like quite a character!

He is too cute! I love the name Reid too:) Hope you are having a great weekend!

Reminds of the Seinfeld episode featuring "Jimmy" who always referred to himself in 3rd person... hilarious. Loving this post and your take on it --- toddlers rule! :)

Hilarious. Let me know if The Reid needs backing dancers - my girl starts ballet next year.... :)

Haha!! Too funny! The Reid is just TOO CUTE!

Totally Cute. Of course I can say that 'cause The Reid lives in your house! -LOL-

Oh my goodness! I love this! That's truly hysterical and adorable. :)

Love it! The Reid is adorable.

That's hilarious!! Is he much more verbal than his twin? You have a way with words that has driven me to be a stalker of your blog. I'm saving myself the trouble of having to hunt you down all the time and just following you. Now I'll be openly stalking you! :)

Oh my gosh, this is soooooo cute. How can you help but love it? I love to see what each of their eccentricities are going to be.

That is too funny. Thanks for making me laugh. Great pics.