Well, 2011 didn't start off so hot.  An injury to my right IT band sidelined me for months.  Several doctor visits later I finally found someone who could do ART (active release therapy) which helped me to recover and allowed me to start running again.  But when June rolled around and I only had 222 miles for the year, I realized that I would have to let go of some of my running goals, including the one where I'd hoped to run my 9th marathon.

In addition, I ran two 5Ks, a 10K, and a half marathon this year.  I was able to (just barely) set a PR (personal record) at the half marathon, which had been one of my goals for the year.

Considering that I only had 222 miles at the beginning of June, I think I finished off the year strong.  I know that I have improved my speed (which was one of my goals for the year), although I am not the fastest I've ever been.  And although I'm disappointed that 2011 didn't have a marathon in it, the running year wasn't a total letdown.  In fact, I think I had some good moments.

So what am I looking for in 2012?  I'm still leery of setting goals much, still scared my IT band will go out again.  So I'm going to set 'light' goals that I feel like should be easy to achieve as long as I stay uninjured, and with a little luck maybe I'll exceed them.
1.  1000 miles
2.  Consistent and continued track workouts - more than last year
3.  PR in the half marathon again

I'm looking at a few winter/spring races, and in particular there is a 10 miler in February and a half marathon in March that I will likely run.  Beyond that, I'm reluctant to plan.

We did start off the year with a run up Mill Mountain with the local running group, the Star City Striders.  It was humbling to try to get up the mountain pushing a 5 year old in a jogging stroller.  I confess I had to walk some sections.  But it was a fun way to start the year. 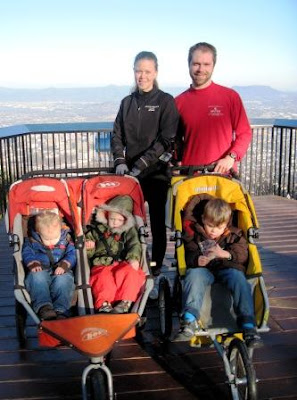 You are one active lady. I don't know how you find the time.

I would like to learn yoga. We do have it on the Wii but it seems I am always so busy that I don't take the time to do it.

As I said yesterday, you are an inspiration. I wish you nothing but the best on 2012 and look forward to reading of your progress.

Wow Lisa! Any type of running while pushing a stroller is pretty hard work. That is amazing that you went up a mountain!!

I have a gym membership, but don't use it. I need to go and put my son in the play area even if he doesn't like it.

Now that's impressive that you pushed Pierce up a mountain in a BOB, even walking some sections! That sounds like a great workout!

This was inspiring to read! I have been struggling with some health issues since my twin pregnancy, but I am eager to at least get back into regular exercise, even if I never can convince ,y body I'm a runner!

getting over 1,000 miles in is amazing to me! and the fact that you did it after being side-lined for almost 1/2 the year is phenomenal!!! go, lisa, go! stay healthy!

You, Ma'am are my hero!! I have never ran in my life, save the time I did when I was playing rugby in highschool but even then I could not run the 5k our coaches wanted us to. My husband is a runner. His goal is to run a half marathon. He pulls out 5k no problem, like it's a cake walk or as he says "A cake walk in the park!" lol.

For now, because I am essentially raising all three kids on my own all I can do is get excercise by chasing them and eating healthy.

Oh, Lisa, you made me tired just reading all that. Just kidding! I really admire you and I'm happy your injury got better so you could do what your really enjoy. And reap the benefits of it all. Congrats!

I just try to continue having fun.I put in a little over 12 miles the last two days off, but normally try for 10 a week.

Hi Lisa your post reminds me that id better get myself in gear and do more exercising
and get in better shape. I love my mountain bike so i think ill be doing much more of that. Richard

In spite of your injury, I think you did remarkably well. I need to get into a workout routine again, but it won't be running!

I'm jealous! I don't have the time. With 4 kids and a home daycare business - by the time I can do anything for myself it's dark! I think we've decided to get a treadmill - because then I could work out around 5am before everyone else is up and our day starts.

Wonderful to read...
Regrets? plenty.. no lot's more than plenty.

You are inspiring to me! I used to run and kind of got out of it a couple of years ago. There really is nothing like it for fitness, mental clarity, and weight control. I need to get back at it!

You are a workout machine. I love that you include your kids in your marathons. They are learning great healthy habits from you, you should be so proud!

I only have one major thing to accomplish in 2012... AND that is to get this weight off --and stay healthy...
Hugs,
Betsy

You have some great goals. One of my goals is to cook a bit healthier.

Oh Lisa, You set such a wonderful example! But if I tried to run I'd keel over by the time I got the end of the block. I do like to walk on the path down by the creek.

You are such an inspiration.
Oh how my moms wishes she could be engergetic as you- I wish she could find my own inspiration, and do it.
Mentally and physically. Its a challenge- and feels impossible to her- She wishes that she had your drive
love
tweedles

Wow, those are really awesome goals! I am happy to just get a walk in every day. I can't even imagine doing a half marathon or anything!

1004 miles I think that is a strong finish...Wonder Woman is what I would call you

You're awesome! I had to smile how you called 1000 miles a light goal. Though it sounds like that will be light for you when you're injury free!

I wasn't suppose to run last year, so this year I'm just hoping to start up...a little...in the spring. :)

Gosh I wish I could just feel that running was fun. You had a great start this year! Sandie

I'd say you finished off 2011 on a good note! That's a lot of mileage after an injury like that.
Great family picture :)

I wish I was as active as you. It's always been my goal, but it's so hard to stay focused and motivated for it. Good for you for doing the marathons...another thing on my bucket list! :)

Look how cute you all are! I am so impressed by all that you do! This year my only goal is to be more consistent in exercising and to run more.

You are adorable! You motivate me! I am actually heading to tennis right now so a step in the right direction!

Your running mileage is incredible!