This past week Flat Stanley came to stay with us, and when he found out that I was scheduled to run a 10 mile race, he insisted on running with me.  I usually race alone, but I decided to allow it just this once.

The race didn't start until 1:00 pm.  This allowed me all day to be nervous and grumpy, and to make the grave error of not drinking anything after 6:30 am because I didn't want to need a bathroom break during the race.  I don't know what I was thinking.  Apparently I wasn't thinking at all, actually.  Flat Stanley should've said something.

As soon as we got there, Flat Stanley saw a college student doing pull ups on a tree limb.  He immediately climbed into a pine tree and did some pull ups too. 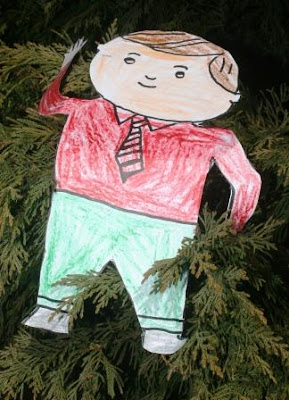 Then he got down on some soft pine needles and did 400 push ups.  This is why Flat Stanley stays so skinny. 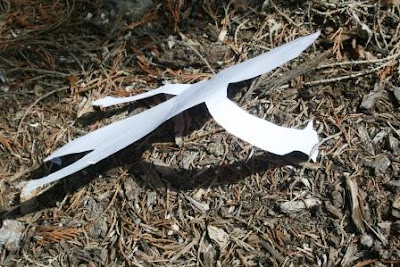 It was a warmer day than expected (55*) and I found myself wishing I'd worn a tank top instead of a long sleeved shirt.  Check out the purple Zensah calf sleeves my parents got me for Christmas - I adore them! 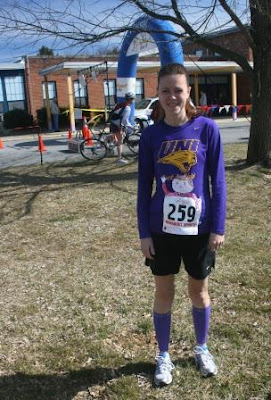 Flat Stanley was pumped for the race and waved at everyone who passed by.  No one waved back.  Poor Flat Stanley. 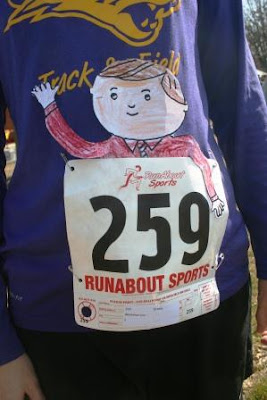 The boys had a 'special treat' picnic lunch before the race started.  We don't do Lunchables often, but when we do they sure get excited. 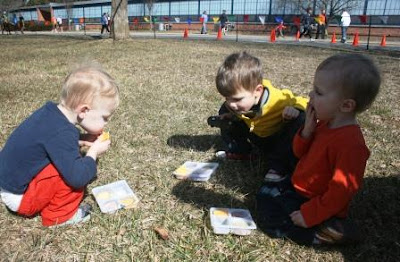 The race started and within the first minute (seriously!) I had a side stitch, the result, no doubt, of abstaining from fluids.  This really made for a slow start for me.  At 2 miles there was an aid station, and I stopped and drank a bunch of water.  The stitch persisted.  At 4 miles, I stopped and drank water again, and voila, the stitch immediately vanished and I was good to go.

This is when we ran past a bunch of fields full of cows.  Flat Stanley complained about the stench.  It was kind of stinky.  At mile 5, the hills began for real (previously, it had been gentle rolling hills).  Flat Stanley and I started pushing a little harder, glad the side stitch was gone.

Meanwhile, the boys were doing this - 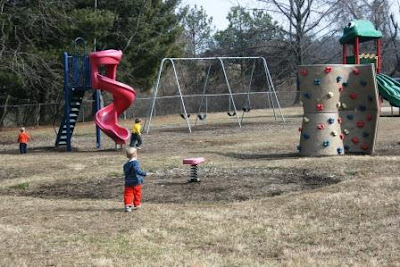 Oh how Flat Stanley whined about those hills.  I began to resent all his complaining, and threatened to throw him in a cow pie.  He got quiet after that, until he noticed I had a vanilla Gu, then he started saying he was sooooo hungry and could we please eat the Gu?  I made him wait until mile 8 to open up the Gu.  The last mile had a rolling hill in it, but it certainly felt long at this point.  My right glute was sore and complaining, just like Flat Stanley.  Finally, we saw the finish line. 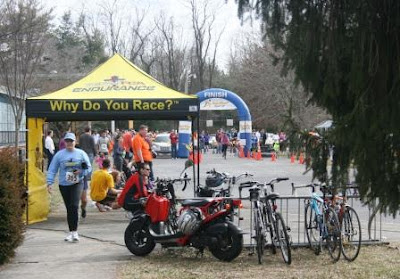 I ran 1:26:56 which is around an 8:42 minute mile.  I would've liked to have run a few minutes faster, but considering the side stitch and all the hills, not too bad.  Behold, the finisher's medal (poor Flat Stanley, no one bothered to give him one. I think he enjoyed the race anyhow, although he claims he's leaving and going to Texas....) 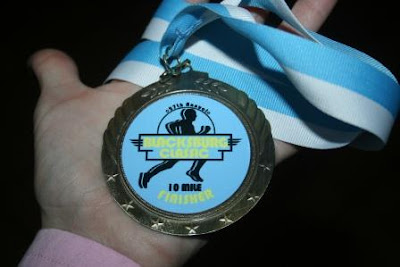 You're hilarious! I'd have been dead by mile 3...Flat Stanley did great! And you're kinda my hero!!

Love those purple calf sleeves on you! Best color ever! But those turquoise ones would probably look pretty good too :-)

BAHAAHAHHAHAHAHA! Oh I love it! You made my day with this report. And Flat Stanley's antics;)

Bwahaha! I love the race report!

Congrats!! That is amazing! Flat stanley made me giggle! I'm sure someone will give him a flat medal too!

Totally smiled throughout this whole post :) I wish Flat Stanley could run a race while I just hung on to him!

congrats on a successful run. completing any run is success in my book! Loved flat stanley and his view!

Congratulations, you were amazing!!! YES, 6:30 was way too early to start abstaining, but you will know better next time. I actually think about three hours head of time is plenty. My, how I have giggled and enjoyed the stories of your new running partner!! I'm glad he didn't end up in a cow patty. What struck me was how excited the boys get with Lunchables. So like kids...with all the amazing homemade lunchables you make them with animals and everything, you would think that would spoil them for just plain old Lunchables, who would want them after seeing your great lunches? I guess kids want anything that they can't have!

Congrats on pushing through that and doing so well! I like the comfy little spot where Flat Stanley was hanging out. :)

Loved this post, Lisa. Is there a history about Flat Stanley that I missed somewhere? Doesn't matter -- so cute for you to take him along for your run. Congrats and don't forget to hydrate next time before the race! :)

My youngest son had Flat Stanley a few years ago. Stanley went to London, Virginia, Colorado and to the White House. President O. actually did send him back, along with a letter and family photo.

Flat Stanley hid himself in my suitcase a few years ago when we went to Maui. He's a tricky fellow!

Congrats on that finisher's medal! You deserve it:)

WOW. First you totally rock, Lisa. You are inspiring and have the best attitude to bring Flat Stanley along for the race! Congrats. Is your shirt UNI as in Northern Iowa?

I love it! I'm glad you made it through you race with your flat companion. :) My kids always beg me for lunchables, but we hardly ever get them either, so it's extra exciting when we do. :)

I am sure it was the extra weight of Flat Stanley that made those hills seem so tall! I loved reading this, congrats on the race!

You are amazing! :-) Flat Stanley makes me smile. I have wonderful memories of my kids Flat Stanley projects from when they were in 1st grade.

You are very inspiring, Lisa!

Congratulations! I agree you rock!!

Wow, I think your time was great! I have never been able to run that fast!

I love the Flat Stanley story and photos. So funny! And your kids were soooooo adorable at their little picnic.

Way to go...you and Flat Stanley!!

Great job! I love how you wore Flat Stanley!