While Paul had run the Grandin Court Baptist 5K before, this was a first for me.  Grandin Court Baptist offers free child care - complete with a bouncy house - for parents who are running the race.  This allowed Paul and I to run the race together.  The race started on a downhill on pavement for a little over a mile, and it went by fast.  I passed the first mile in 7:13.  Not long after that, we headed into the woods, on trail.  The trail was well marked, but there were some stairs involved early on and they were tough!  After the stairs things smoothed out on the trails and I felt light as I jumped roots and went around corners.  I was second female at this point, but third was right on my tail.  After I came off the trail, she passed me just before we got back on pavement, putting me in third.  This is where things got hairy, because fourth place was then right on my tail.  I wanted to hang on to third, so I pushed really hard.  The finish is on a very long gradual up hill, and the lady in 4th had a person biking next to her, coaching her on.  He was saying, "Just 30 seconds left at this sign, push hard, you can take her, you can do anything for 30 seconds!"  Believe me, I dug deep at this point to try to hold on to third.  I dug so deep that I was hoping I wouldn't end up tossing my breakfast at the finish line.  Luckily, I managed to hold on to my stomach and my 3rd place.  I finished 4 seconds behind Paul (one of these days I'm going to take him!), and 2 seconds behind second place.  The girl behind me finished 2 seconds behind me.  My time was slower than usual for a 5K due to the trail portion, but I was happy with it - 24:36.

We dragged the kids away from the bouncy house so they could participate in some events themselves.  Cort and Reid did the toddler trot.  They just stood there after 'GO!' so Paul had to grab hands and lure them along. 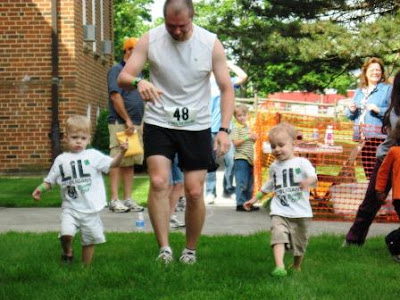 Then it was Pierce's turn for the Kid's Fun Run.  You can see Pierce and I at the back center - I'm in a dark purple tank top (although in this picture it looks dark blue) - 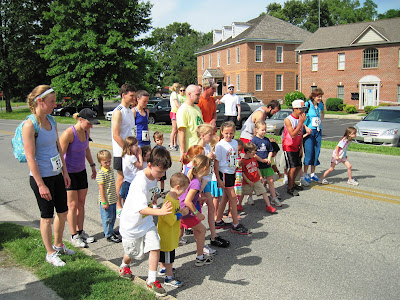 It was maybe half a mile total, and Pierce did well even when he got tired on the uphill at the end.  He didn't complain, just slowed down a bit. 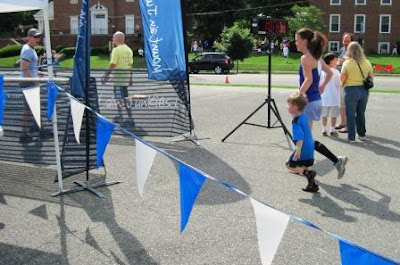 My prize for 3rd place wasn't a trophy this time, but a $20 gift card to a local running store.  How cool is that?!  Pretty sure we'll be doing this race again in the future - it was a lot of fun for our entire family. 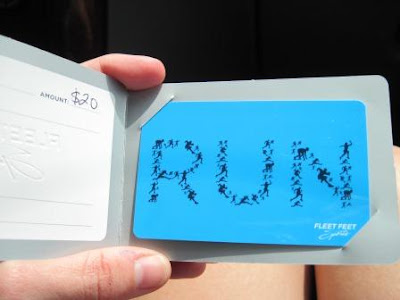 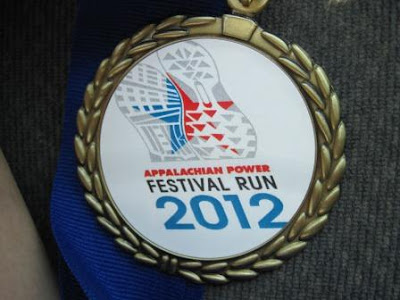 Way to go, Lisa! This sounded like a really great race. I love that they had childcare so Paul could join you. Looks like the boys had a blast.

Congrats to YOU! and a great event for a family to participate in together, you two are terrific parents.

Congrats on your 3rd place win! Yep, I'd rather have a gift card than a trophy.... they're just dust collectors as can be evidenced in my husband's home office. LOL

This sounds like a great event! How wonderful that they had things for kids to do.

Way to go lisa! !! Have a good weekend

Yay fam!! I can't run, but I do walk every day. Of course, DH walks circles around me, but that's ok. Congrats for placing to all of y'all!

Paul may be slowed down looking over his shoulder for you to pass.

You go, girl! Weren't you complaining a few years ago that you're SLOW??? What was up with that?

Nice work!! I would have wanted to turn around and kick the guy coaching loudly enough for me to hear it. :) I love this recap especially because that's my neighborhood!!! :)

Way to go! Congrats on holding on to the 3rd place even with someone breathing down your neck. Sounds like running might become a family affair.

You'll have to try the Giblet Jog 5K one year--I mention it in my post today.

You are so inspiring! And I admire you for beating out the broad with the personal coach! And the gift card is a great prize!! Well done, my friend!! :)

Congrats!! That looks like a great family event too!

WAY to go! Sounds like it was a tight finish indeed.

What a fun event!

Congratulations!! Do you know what you will get at the store? That is a very cool prize! So Paul was second and you were third? Well, laugh if you want, but exactly how long IS a K??? I even asked someone who was running in one (my daughter-in-law) and SHE didn't know! The boys look so sweet in these pictures. Glad you didn't throw up!!! Ones who throw up should get a special award for toughing it out till they barf.

Such fun for the entire family! Way to go on your third place! Have fun spending the prize!

Way to go Lisa! I haven't blogged in a while, but I did see this post and wanted to let you know that I am running my very first 5K ever in a few weeks! I used to always read your posts about running and I never "got it" until I started training in the past month. Now, I consider myself a real runner and I know it is something I will always want to do! You are pretty inspiring to me and I'm sure other people too! :)

You constantly amaze me, Lisa. I'm proud of you and we ain't even related!! :)

Glad the boys had fun also.

I was hanging on to every word hoping you'd keep that 3rd spot!
:)

Congrats to you, Paul and the boys! Hey, what is that black thing on your leg or am I seeing things?...:)JP

I imagine you enjoy running with your hubby -- I like the fact that they have something for the kids to do while you "enjoy" the race. :)

Whooo Hooooo Lisa!! Way to go. That is a much better prize than a trophy that you have to dust.

Way to go, Lisa. I enjoyed these pictures so much. A great way to involve the entire family. Congrats on the gift certificate - let us know what you purchase!

Congratulations on third! What an accomplishment!

Congrats! A gift card is so much better than a trophy!

You are so inspiring!
We have been having computer problems so not getting around very good it seems!
love
tweedles

My husband ran for over thirty years until he was injured at work and to quit. That was before we met so I never got to accompanied him to a race. Reading your post today gave me a hint at what that would have been like.

Congrats on the cash prize. Always better to be able to go shopping over dusting a trophy.

Getting fit while bonding with the family- you can never go wrong with that! :)

Reminds me of the first fun run my daughter and I joined... We had a blast!

Great that the coordinators provide daycare! You must be in great physical shape. Kudos!

How fun and inspiring! I love this!

That's too funny that they just stood there after 'GO'! What a fun adventure for y'all!

That is great that they offer childcare! Makes for a fun, fit family outing.

Great job, Lisa!! And, what an awesome prize!!

I love it! I love that they have daycare and then the kids get a chance to run.