Since Pierce has been so into all things space, we wanted to stop by the NASA Wallop's Visitor's Center while we were at the beach. Luckily, it was only about 10 minutes away, and it was free! 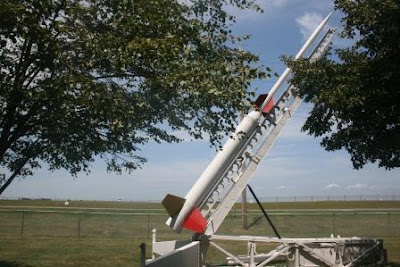 The twins love to work puzzles right now, so they were really drawn in by these huge foam space puzzles. 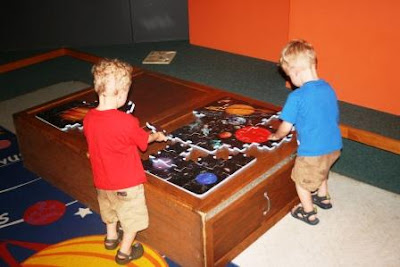 Pierce liked this bottle rocket launcher.  You press it down and it fills with air, then you let go and it soars up on the line.  It was kind of noisy, so he was initially scared, but then he came around. 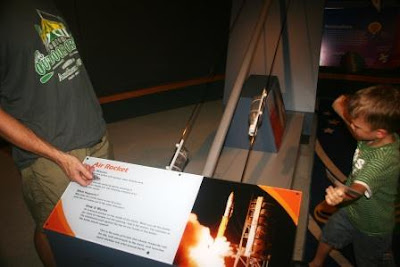 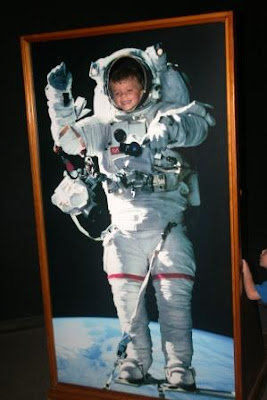 They had one of those globe things that shows a movie you can sit and watch. 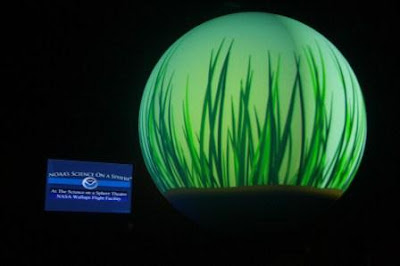 It was nice and cool in the room, and I loved watching the movie evolve across the giant glowing globe. 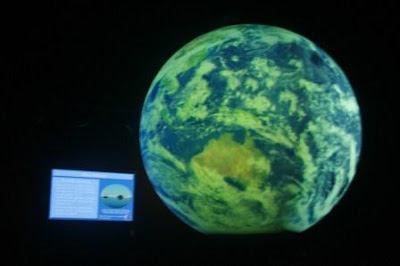 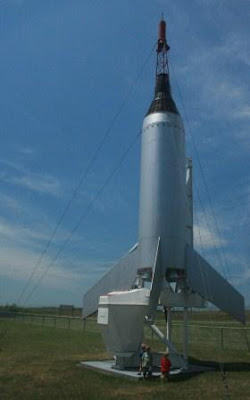 On the top of the visitor's center is an observation deck. 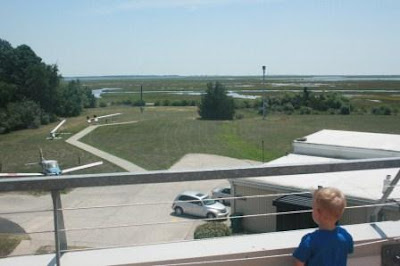 You can see many of the satellites across the field. 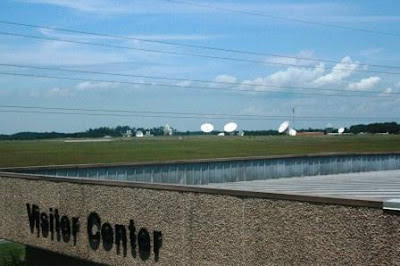 The boys had fun pretending to talk on the phone. 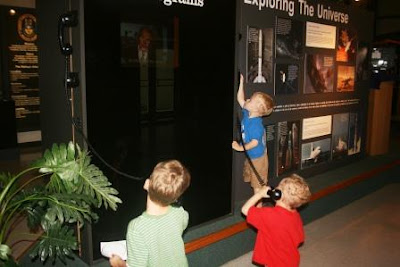 And of course, we had to finish off our visit with some Astronaut ice cream.  This was the first time the boys had tried it, and they loved it!  I hadn't had it since I was a kid myself, and I have to say - it does taste just like ice cream! 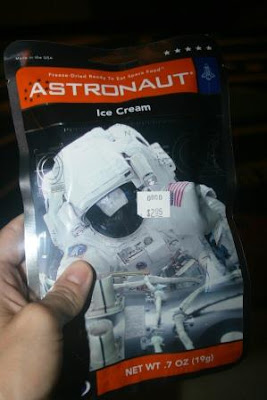 Hey that looks like a blast! "I remember i was a kid we took a 14 hour road trip to kennedy space center in fla. Have a great day!

Love that Pierce floating in outer space. How cute is that! Bet the boys were in heaven around all the space things. We toured Nasa in Florida years ago. Pretty darned neat!

This looks like a great place to visit! The globe projector looks really cool.

How cool the boys got to see this... well Pierce is probably the only one that really appreciated it out of the kids. The other two are a little young. Looks like the enjoyed the puzzles though.

Dreams and memories in the same trip. Perfect!

Looks like the boys had a blast! What a full vacation you had. My son always enjoyed Kennedy Space Center. :)

This looks like a great museum! I can't get over how primitive the rocket that carried Sam and Miss Sam looks-almost like some high school kid's science project!

Amy loved museums like this as much as your boys do. I think it is so wonderful how you guys take advantage of what these places have to offer!! :)

Those pictures are great! That looks like such an amazing place to visit.

another great experience you give your boys! :)

Looks like a neat place with hands-on fun. Y'all did a lot during vacation--lots of adventures!

That movie is really cool, and finishing with ice cream is perfect!

What a cool place! That place just says little boy all over it. I think Kyle would even like that place! :)

Love the photo of Pierce as an astronaut. Too darned cute.

Sounds like your family is having a wonderful summer! Enjoy!

What a fun place for little guys.

That pic is so funny. I didn't ask Mary if I could share it --- I might get in trouble. Don't you love our fuzzy curls?

That looks like a great place for your guys! I'm glad you got to go there.

Don't ya just love Mary's and mine fuzzy curls?

That looks like a wonderful time, do they let 'adults' play too?

Thanks so much for your well wishes, they were very appreciated.

oh i want to go!! you bring them to the best places!!!

Pierce in that space suit picture is adorable. I think that dried ice cream is nasty. I had some friends that used to carry it backpacking.

I know the boys enjoyed this outing so much. What special photos/memories.

Thanks for your kindness re John's surgery!

Lots of food for young imaginations there.

What an awesome day for your boys! You're always giving them some neat experiences.

Glad they were able to try the ice cream!

He is so cute in his suit! I want to go with you new time!

What a great experience for all three boys... I know that Pierce especially enjoyed it... Astronaut Ice Cream, huh??? I've never had any --and probably won't ever have any... ha

That looks like fun and free is for me! :)

Looks like they had fun. I remember the Astronaut ice cream my kids brought home from NASA.

You and Paul are such good parents!...:)JP

Always enjoy the freeze dried ice cream. Looks like a great place to take the boys. I am sure Pierce loved it.