I've wanted to see Pony Penning Day at Chincoteague my whole life.  We woke up very early on the big day to catch a shuttle to the swim site.  We got there early, so we had a two hour wait. 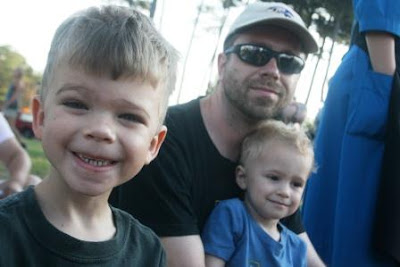 This picture was taken before things got crowded.  By the time of the swim, people were really packed in. 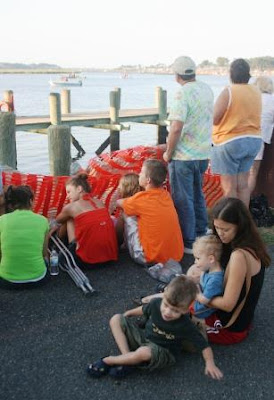 Cort kept wanting to sit on my lap, but Reid didn't want to share my lap, so I told him to sit on Pierce's lap.  They thought this was hilarious. 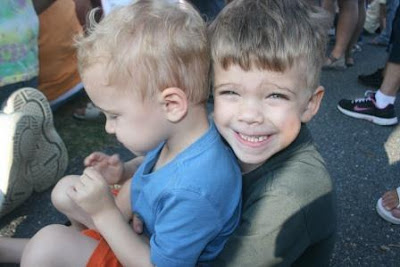 While we waited, Pierce entertained the people behind us by introducing himself to them as The President of Virginia.  He then asked them for their votes.  They were happy to oblige, amidst a few chuckles.
We waited and waited for the red flare to go off, which was the signal that the ponies were on the move.  We could see them on the distant shore of Assateague, tiny dots on the horizon.  Finally, the Coast Guard sent up the flare! 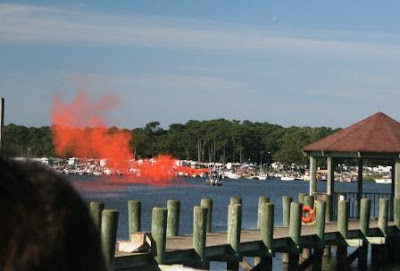 I wish we had been closer, or that I'd had a big zoom lens, because it turns out that we didn't get the best view.  We had expected them to swim across in a different spot.  But we were able to watch clearly from where we were at least.

After the swim, we headed over to Pony Swim Lane to watch the pony parade.  The ponies have an hour of rest before the parade down to the carnival grounds.  So we sat and waited some more. 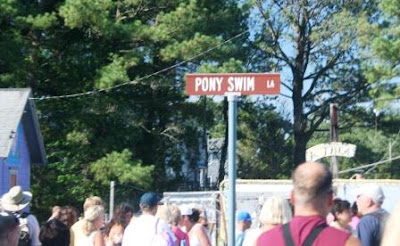 The smart folks had waded out in the marsh to see the pony swim, so there were lots of folks with muddy feet trekking by. 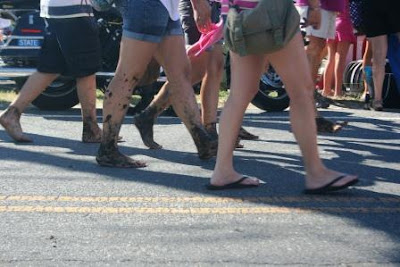 Finally, things were coming together for the parade.  I had a prime spot to see the ponies, aside from the sun being in my eyes. 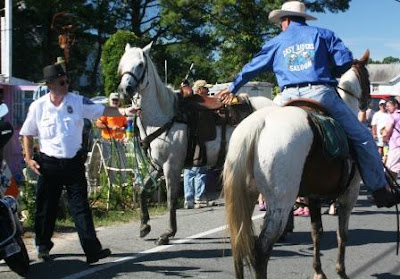 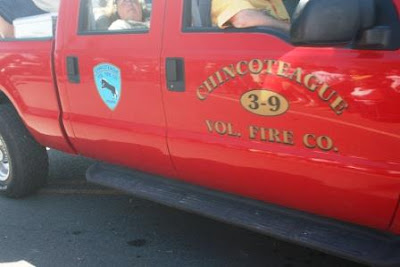 And then, here came the ponies! 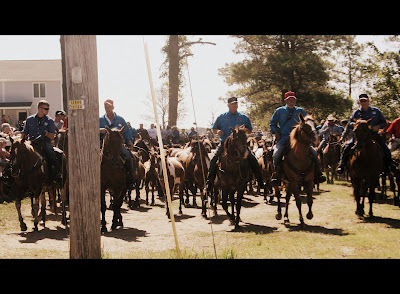 I couldn't believe how many paints there were. 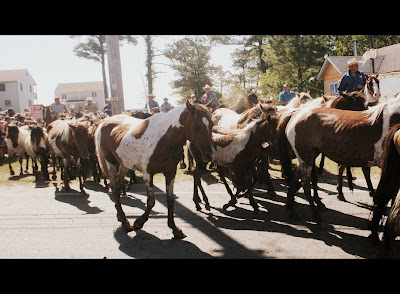 The cowboys kept them boxed in pretty well.﻿ 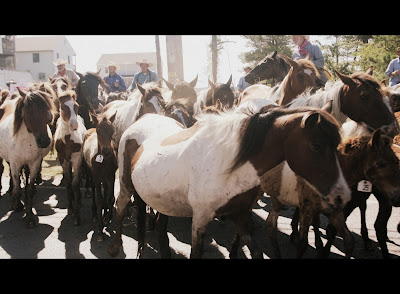 They kept the horses moving along at a good pace too. 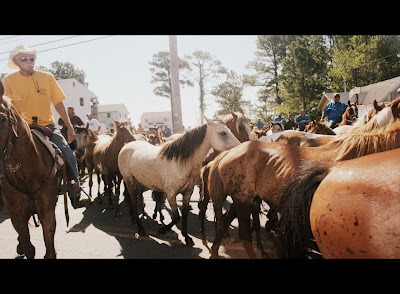 And before I knew it, the parade was over.﻿ 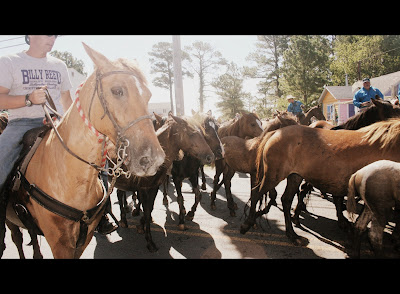 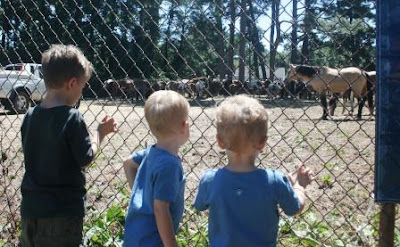 We let the boys go on a carousel ride. 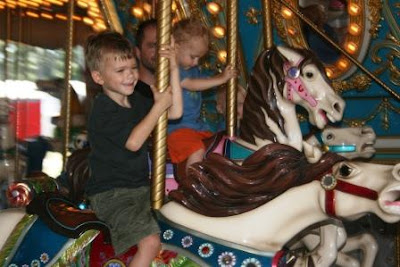 And then caught the last shuttle (aka school bus) back to our townhouse.  What an experience! 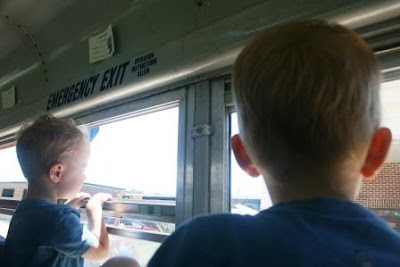 How about you, readers?  Is there anything you've dreamed of doing since you were a child?  Something you're just itching to scratch off your bucket list?

It's Rural Thursday!  Time to link up your stories of the rural life with Nancy from A Rural Journal and myself.  Just grab the code below the button and paste it into your blog post.  Then come back and add your website to the linky. Please be sure to comment on the posts of at least 5 other participants.  I can't wait to read what you've written!

What a wonderful vacation day. Those little eyes gleam.

Months ago, I drove to Winslow, Arizona to see the "corner" Jackson Browne and Glenn Frey wrote about in the song "Take It Easy".

How exciting!! I love the proceeds went to your fire department. Tell Pierce I would vote for him in a heart beat!

oh so much fun and very impressive photos too! glad you took them. now it needs to be an annual thingy, huh?

This looks like a wonderful time, it's something I've always wanted to do as well; sadly, the Great Scot has absolutely NO interest in seeing wild horses whatsoever.

The President of Virginia? Love it, what a charmer!

I've never heard of anything like this! I've been to lots of horse events, but this is a first. There are some great looking horses in there. It had to be fun to witness in person!

Your boys are adorable! What happens to the ponies after they auction them? Do people take them home and tame them? I'm not much of a horse person so the questions are probably "duh" :)

Wow - what a fun experience. The horses are beautiful.
I always wanted to visit Boston in Autumn!

I have always wanted to see this! What a great experience!

Oh Lisa I can see how you would want to go see this. Amazing. I like the President of Virginia I think Pierce is funny.
Your photos of your kids make me smile every time you have given them such a great life.
My dream was see the mountains and touch the ocean I did that a few times now in Vancouver so I am contented. Maybe see the other ocean on the East coast B

I love watching your boys grow up! I have two nephews that I was very close to. They remind me of those good times with them.
Thanks for hosting another great party!

That's a lot of horses! Good luck on the Presidency!

One of these days, I'd love to take Livie to see Pony Penning Day!

Looks like a great time, despite the long wait, which must've been really hard for the boys!

Ha! The President of Virginia! I'd vote for him. ;)

Your boys are so cute. I'm glad that it was so funny that you'd suggested Cort sit on Pierce's lap!

Hey, that's a cool photo of the ponies as they're swimming, even if you're far away. Must've been a great site in person.

Pierce is such a card. LOL... asking for votes.

How cool to see the horses swimming and also parading down the street!!! That is something most of us have never seen.

Lot's of smiling faces there! I want to go to Alaska,lol!

Ever since reading Misty of Chincoteague as a child I have wanted to see pony penning day. Don't know why I never did
Your photos show the excitement of the day!

I love the image of Reid sitting on Pierce's lap!

Well, now I want to add THIS to my bucket list! Sounds exciting and the photos were great. I love horses.

I think Virginia would do fine with Pierce as president! :-)

i remember reading about the pony swim when i was little. :)

Beautiful horses and how neat that you were able to realize this dream with your family.

I think living where I do and being able to stay at home has been my dream come true.

Your boys are just too cute! Looks like an exciting day for the family. Hope you have a great day!

So glad you were able to check that off your list! Very neat!

Very cool! We saw some ponies roaming the beach when we visited Chincoteague :)

How neat, Lisa. I've never heard of that.. Looks like so much fun --and I'm sure that the boys really enjoyed it... Glad you got to go...

I still have some things on my list: visits to both Alaska/Canada and Hawaii... Hope I get to both places.

Your boys are adorable!! I had two girls and I can tell its just a different world☺ Take each day with joy...it goes by SO fast.
Laurie @ Pride in Photos

What a fun family day!! Still working on the bucket list, almost done!!!

Oh how lucky you are! What a great experience! I have wanted to see it since I read about when I was a child (60 long years ago). The whole story of the island ponies fascinated me. Great pictures! Thank you for posting your experience.

Like you, I have always wanted to see the ponies swim. I didn't get to see it when I was there :(. Once again that Pierce is adorable!!

Wow - that looks like a really fun day made even more special by the fact that you've wanted to do it for so long!

All in all it looks like ya'll had a fun day!
I wanted to see the Lipizzaner Stallions since I was a little girl and my hubby surprised me with tickets a few years ago! Wasn't that sweet? It was a great show! :)

Wow, that's a pretty awesome day! I really want to go to a lantern festival...but only since watching Tangled...not exactly a lifelong thing :)

That looks like so much fun!! Glad your dream came true.

That is the coolest thing! Looks like quite a time and quite a day. Your kids are too cute!
Liz

You all have had the best time ever! I would love to see all that fun!
love
tweedles

How does it feel to be the mother of the President of Virginia! lol I laughed out loud when I read that! hahaha I'm glad you and your family had a great time!

That must have been such a wonderful experience. I have always wanted to sky dive. I don't think I will be luck enough to do it though.

Looks like everyone had a great time!! You took some fabulous pics !!

one of these days I'm going to see that! some how we are always so darn busy- with just living! ach! Loved this post! Thanks for sharing - and I cracked up at your son introducing himself as the president of Virginia - that rocks!

That looks like so much fun! There are so many things on my bucket list, I don't know if I will ever get around to doing them all!

Never heard of anything like that. Looks very interesting. What a fun day and the ponies are beautiful.
Tell Pierce he has my vote too!

I keep reading and re-reading this...I would have loved to have seen this!...:)JP