Last Day at the Beach

It seems that even when you have a full week of vacation, it passes so quickly.  Before we knew it, we were on the last day of our trip.  Can you believe it took me well over a month to publish all of my posts from Chincoteague?  We sure had a great time.  On our last day, we decided to start the morning with a run and the beach. 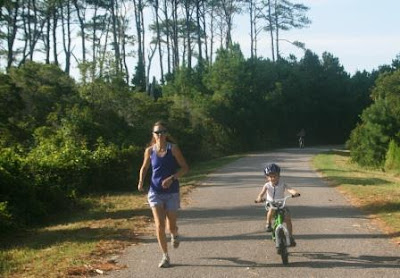 We did a 3.2 mile loop on Assateague called the Wildlife Loop.  It was pretty hot, even though we started before 8 am.  There wasn't a ton of shade, and I kind of wished we had done the Woodland Trail instead (I had run it a couple of days prior, and it had more shade). 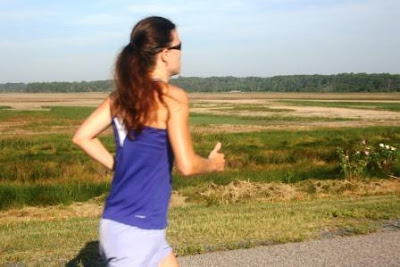 Still, it was pretty scenery for a run, and I enjoyed it.  I took it slow as my legs were tired from a run two nights prior. 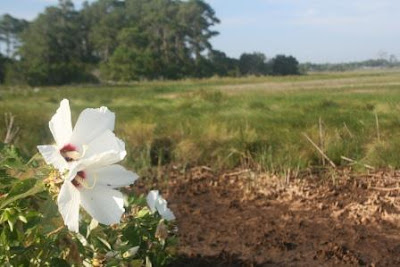 I don't know what these huge flowers are, but they were in bloom all over the marshland.  They came in both white and pink.  Gorgeous, aren't they? 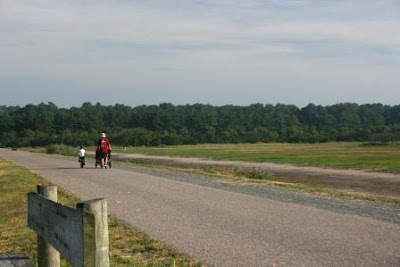 Paul pushed the twins in the double bob stroller while Pierce rode along on his bicycle.  Afterwards, we headed to the beach to rinse off and hit the waves. 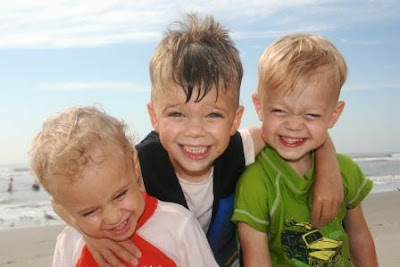 The boys were actually willing to give me lots of smiles for pictures on this particular morning, so I took advantage. 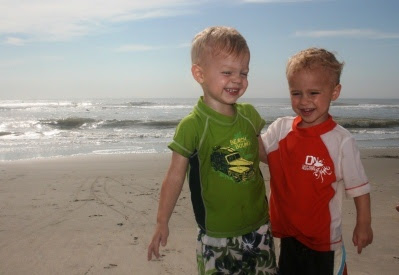 Paul liked getting out in the waves with his body board.  We've had this thing since we were just married and lived an hour from Galveston, in Houston.  We used to take the dogs to Galveston on weekends, and bought the body board then.  The waves there weren't much, but the waves on Assateague were perfect for it. 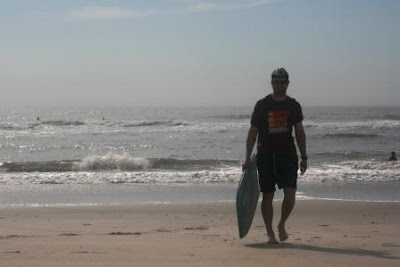 Look who FINALLY warmed up to the water: 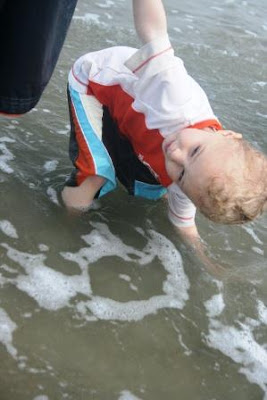 And look who didn't.  Well, maybe next time Reid will feel more comfortable.  And he did have a great time playing in the sand. 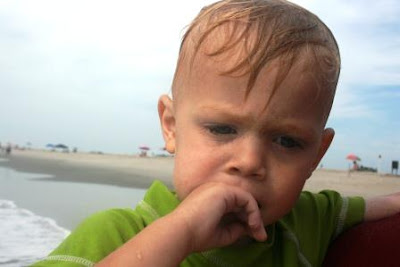 As for this kid - he just couldn't get enough.  I'm not sure I've ever seen Pierce so joyful as he was playing in the waves, and driving his truck on the sand.  Seeing his enthusiasm made every moment at the beach so memorable.  I could've watched him rolling in the waves all day. 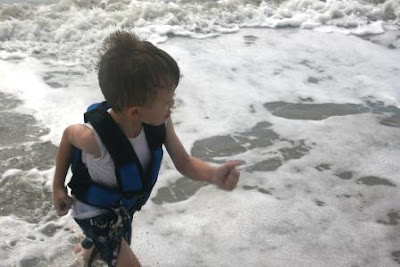 What a vacation!  I hope that next time we don't have to wait 5 years before we get to enjoy a week away as a family.

I've enjoyed reading about your family vacation and hope you don't have to wait so long for the next one!

How cool that Pierce loved the water! I can just picture him rolling in the waves.

You had the best vacation!

Oh Lisa I enjoyed going on your vacation with you. Your smiling happy boys faces always make my day. B

You will always remember these vacation! I knew you would get a run in :) have a great day

The boys' smiles say it all! I hope you don't have to wait 5 years either.

What a wonderful vacation for you all to have! And I am seriously impressed that you are running...on vacation. Although, since I don't run I probably wouldn't be able to relate anyways. :-) I hope you don't have to wait another 5 years as well!

It was a nice year to be at the beach. I bet the water was nice and warm.

What a lovely time, I so enjoy those waves myself.I tried to parasurf a few years ago on a lake, but it isn't the same as riding the waves.

Looks like an awesome trip! What a cute photo of the three boys together!

Those smiles were worth waiting for! You're even running on vacation...good girl. LOL I too hope you don't have to wait five years for another vacation. We try to do long weekend getaways because week long vacations are hard to come by at times. :) Thanks for sharing your vacation!

Adorable pictures!! It looks like the kids had a wonderful time at the beach!

the pic of the 3 smiling boys is priceless!!!

I enjoyed reading about your vacation and all your adventures! Love the smiles on the boys, and so glad everyone had a great time!

I believe those are some form of hibiscus... I've noticed them along the lieutenant river here in CT too....

Beach vacations are the best.

We're rented a house in Corolla (Outer Banks) and leave on Sunday. We waited until after Labor Day because the rates dropped by half! Excited, but hoping we don't get nailed by hurricane weather! Glad you guys had a great time!!

So many great memories. Your boys are sooooo cute!

Thank you for your kind words. I am feeling better everyday. I miss him bad! But I know he is joyous and whole now.

have a super day!

What fabulous photos of the boys. You chose the perfect vacation spot for each of you to enjoy! Thanks for taking us along!

Lisa-those flowers almost look like a type of hibiscus! I love the beach, too-and I hope it won't be five years before you guys get back.

Today I am enjoying peace and quiet:)

It took me a long time to get my vacay photos up to!

Your kids are so cute. Such smiling faces in that brother shot.

Don't worry, you won't be waiting five years until the next! I think those flowers may have been Hibiscus...there's a big pink one near the fence in the front yard as you go up the mountain...Pierce looks like he's in Heaven!...:)JP

You enjoyed that vacation to the fullest and made every moment count. I love all those smiles!

It sounds like a perfect last day.
The pictures of the boys are so cute. Your Pierce looks like he has gorgeous eyes! Those smiles are really big ones. So glad you had a wonderful vacation.

Hi Lisa, Looks wonderful---and I can tell how much all of you were enjoying the beach... WE love it too...

Loved seeing Pierce riding his bike with you when you were running. So neat!!!!

You need to plan to go back there every year. Make it a tradition...

I used to live at Clear Lake --south of Houston--so we enjoyed going to the beach at Galveston also...I have a son living there now.

Not sure if those are hibiscus or Rose of Sharon -- but they are lovely.

Love the photos of the boys playing in and around the water. What a great experience for them. :)

Amazing vacation. And you have an unbelievable figure for having twins. The boys look so happy! So glad you all had fun!

It looks like so much fun! We haven't been to the beach in way too long. I'm wishing I was there right now!

These will be wonderful memories for your boys! The flowers look like Hibiscus to me.

Don't feel bad about how long it takes to put up a whole vacation...it takes me forever!!!! Wow...you wrote on my blog that you did a marathon in San Fran? That would be a great time.
Laurie @ Pride in Photos

Great pictures of the boys. Glad you all had a great time.

I loved the entire series of posts. I felt like I went on vacation with you. The beach sounds like a great ending note for such an amazing trip.

I love how athletic you all are - such a good example for those boys of yours. WE just had a breakthrough with Naveen and water - he used to hate baths but now that I"m running bubble baths for the two of them at the same time he's warming up to it.

I love all your pics! The first picture of the 3 boys together is adorable!