This marathon starts early, at 7 am, so it was a very cold wait for the start.  They were nice enough to have coffee available, which I don't drink, but it was nice to know it was there!  I did a lot of stretching during the wait, trying to prevent injury.  The race kicked off with a loop through Harpers Ferry National Historic Park.  We crossed a sand pebble lane, and I was feeling the cold on my legs, which were in shorts.  I had a long sleeve technical shirt, gloves, and a long sleeved cotton shirt of Paul's that he said he wouldn't mind if I ditched during the race.  So it was chilly but I started warming up quickly at least.  We followed another sandy pebble lane to the Murphy Farm loop, which was scenic and interesting.  From there, the race went into historic Harpers Ferry.  Restored buildings and cobblestone streets delighted me - I remember turning to the guy beside me and saying, "This is so cool!" and he readily agreed.  After that, we crossed the Potomac River on a footbridge that is part of the Appalachian Trail.  The sun was coming up behind the mountains, and the view took my breath away.  The footbridge was covered in ice towards the end (yes, it was that cold!) so we had to walk, and everyone also walked down the circular staircase at the end which led to the C&O Canal towpath.  This path ran along the river from mile 5-15 or so, and was small gravel/dirt.  It was around mile 10 when the unthinkable happened.  That pesky old IT band went out.  I had been running really well, and at that point was on target for a 4 hour marathon.  So I had to ask myself - did I want to stop, and not risk further injury, or did I want to push through, which would lead to a more severe injury, but also would allow me to see the rest of the course and receive a medal at the end?  I chose the latter. 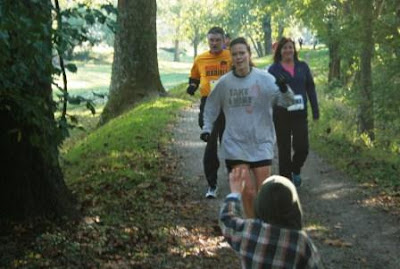 I saw the boys when I came out of the woods at mile 15, and told Paul briefly that I was injured.  I had slowed down significantly at this point, but wasn't having to walk too much.  That was about to change.  I hit the hills and my IT band had shooting pain radiating down my entire leg.  It absolutely wasn't going to allow me to run hills.  So I walked them.  I realized as I walked across the Battlefield of Antietam, step by step, that it was the most beautiful day for a run.  Statues of Civil War soldiers towered over corn fields, and the sun beamed over bright blue skies, and I wouldn't have missed that for the world.  After passing by historic Mumma Farm, we headed into Sharpsburg, Maryland, where I got to see the boys again. 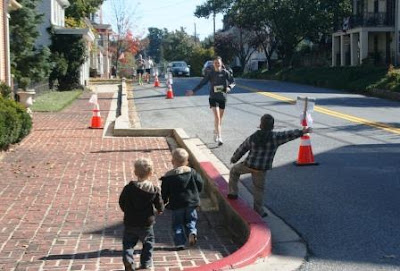 By this point, even running on flat or down hills sent shooting pain, so I was doing more walking than running.  But I was enjoying myself, even though I was disappointed that I was being passed by so many people. 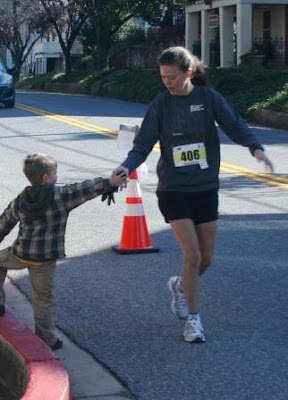 After Sharpsburg we headed across the Rumsey Bridge over the Potomac River and back into West Virginia.  I still had good spirits. 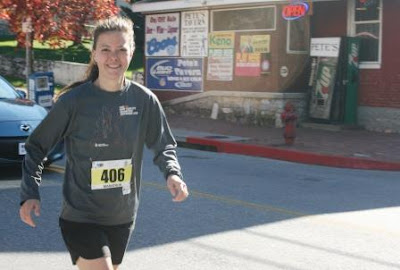 The race finished at Shepherd University's Ram Stadium.  I was able to muster up a run for the finish line at least.  My time was 4:30:57.  Considering how much walking I did, I'm actually pleased with the time.  Once I finished, it was time for the boys to do the Kids Fun Run. 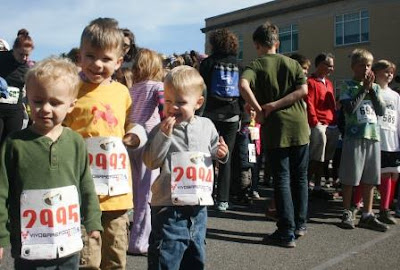 After the race, they had a post race party with music and food at the Bavarian Inn, which was really scenic itself.  I got a free commemorative beer glass and drink, but didn't have any cash so I couldn't get food. Wish I had known about that part.  I was hungry! 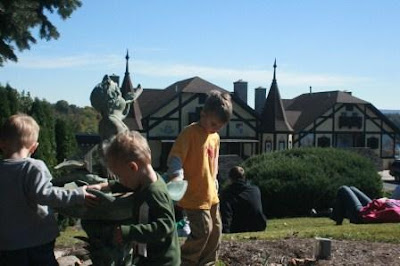 Although marathon #9 didn't turn out quite like I'd expected, I'm so glad I ran it.  I'd recommend my fellow runners add it to their bucket lists - I think it's my favorite East Coast marathon that I've run.  It was well organized, small town friendly, beautiful and historic.  I even met the race director at the registration pick up - and he was super nice and answered a few questions I had.  This is one of those little known marathons that one day will be discovered and everyone is going to want to go run it!

As for me, my IT band is more torn up than I expected, and I'm guessing I'm facing about 6 weeks off (at least).  I'll be headed for some ART work on it as soon as I can get in, and hopefully it will improve more quickly than expected.  Also, pictures of some of the historic areas I mentioned here will appear in future posts, so stay tuned!

Well that is some serious commitment! I hope that you heal quickly! Great job finishing :-)

I'm so sorry to hear that you were injured! Take care of you and I'm looking forward to the photos.

I'm so sorry about your re-injury, Lisa, but proud of you for making it to the end.

I've actually been to Antietam and it is a terrific place to see.

Great report and, despite the ITB, looks like a memorable event. I could see doing that....if they had a 5K :-)

Oh Lisa I am so sorry you were injured I know that must be painful, I hope the therapy helps.
You are one tough(crazy) runner to run through the pain. I can see why you did it and to see your boys so happy when they seen you coming must be an incredible feeling.
I love the way you wrote this and talked about the history and the wonderful views you were seeing.
Take care of yourself and I am in awe of your strength. Congratulations. HUGS B.

What a shame you hurt yourself. It;s great that you still enjoyed the day, though.

Congrats n the finish. Im sorry you got injured but atleast you had a pretty day! !! Have a great one

Oh Lisa, I'm so sorry about your injury and hope it heals sooner than later. I think your time was fantastic considering the pain you must have been in.Take care of yourself. Love the way your boys are there to cheer you on!

Oh I Hope you heal quickly!!!!
Very proud of you for sticking it out!!

I am so glad you were able to finish the race. I feel so badly that you had an injury.

Oh Lisa, What a bummer. I don't know how your run when you are in pain. No way could I do that. I am such a sissy.

So sorry about your injury. The sights along the run sound wonderful and I look forward to the photos.

The tough thing about repeated injury is scar tissue also.it can really give you some problems in later years.Take care

What a trooper! Congrats...wishing you all the best with your recovery! Let's hope it will be a speedy one!
Warmly,
Loretta

As a non-runner, I've never really understood the desire to run. Maybe it's got to do with short legs on a long body! Glad that you were able to finish, and hope that you heal well, and soon.

Oh Lisa, sounds like you took a beating. I am glad you stayed on it and walked but not that your injury was so much... :(

Your boys are so cute and you could tell Daddy was saying, "Go cheer Mommy on, go". Such a darling family you have.

I didn't realize you lived in that area. That is great. Thanks for the detailed run down, ya.

HOW disappointing to get hurt in the middle of such a great race. Way to finish, though. I hope the recovery is not as awful as you expect.

terribly sorry about the re-injury! the one thing i was hoping wouldn't happen (as i'm sure you were!)

Congrats on participating in the marathon!

So sorry to read about your knee. Wishing you a speedy recovery.

Take good care of yourself and get well quickly, ok?!!

I love your photos! I remember visiting those same places and being struck by the beauty of the area and the cuteness of those same small towns. Your wonderful post makes me realize how much I miss Virginia!

So sorry about the injury, but congratulations for doing so well despite it! You are one tough lady!

Sounds like a beautiful place to run... so sorry you were injured, but hope you heal quickly!

so sad lisa but i still enjoyed this entry!!

your spirit, your cheerleaders, it warmed my heart!!

Great job! It must have taken a lot of will power to finish with an injury like that. Congrats! :)

To say I'm impressed is an understatement - it's all I can do to run 3 miles! But I've been in that area and know how absolutely gorgeous it is. I don't blame you for going on to the end! I'll let my son know about this one. He's run one marathon and wants to do more. Hope your IT band heals completely!

Congrats on making that run!

That showed a lot of dedication. You really pushed through some pain to do it, but it sounds like you're more than happy you did! Congrats on finishing, now heal up quickly!

Hope you heal quickly! I love Freedom's Run, it's a great race!

sorry to hear about your injury! I do love your pics! Your boys are so sweet taking care of mommy. :)

My older sister just ran her first 50K last week. She was in some major pain afterwards.

I am sorry to hear about your injury. I hope you heal quickly. I can't wait to see more photos. My son lives down in that area. I think that is one of my favorite trips.

Girly I am so proud of you!! WTG. Man darn injuries, I hated reading that darn IT kicked in. But I knew as I read the choices you were running through your head what you would do! :O). You had a good time even with a injury and having to walk some! WTG!! I hope you heal fast. :O)

You are such a COOL woman and mother.

Lisa - I'm so happy for you! You sure were commited my friend! Hate to hear you were reinjured. I hope it gets better soon.

I wonder if it was because the weather was cold that your IT band went out.

Oh gosh.... sorry to hear about the injury you sustained. I would have been a whiney little brat and simply bowed out of the race. You amaze me in your will to go on with it.

Also, can't wait to see the historical photos. We lived in Maryland for 4 years and totally loved it!

I like that smile on your face at the end! So sorry about your injury- hope for a speedy recovery!

Sorry about your injury. Hope you heal quickly. I have to say if I was a runner that sounds like the best marathon race ever. You saw so many interesting things. Hope the boys had fun running.

Well, congratulations for pushing on and finishing--that is amazing in itself! I hope that you heal quickly and get back to running again.

Can't wait to see the photos of the area.

What a great role model you are to the kids--I'll bet they were very proud to see you running in that race!