Happy 2013 folks!  This is a really special New Year for me.  Because today marks 10 years since I made the New Years resolution to stop smoking.  I haven't touched one since.  But oddly, I frequently still smoke in my dreams when I am asleep.  This always upsets me - I often dream that I have forgotten that I stopped smoking and have taken it back up without realizing it.  This is certainly NOT in my plans, and I am proof that resolutions can stick when you set your mind to them.  Of course, in conjunction with the 10 year anniversary of stopping smoking, it is also the 10 year anniversary of starting running.  Which has played such an important part in my life for the past 10 years.  I've run on mountains, on beaches, on pavement and trails, in other states and even on a cruise ship in the Caribbean.  The only times I have stopped running have been for a knee surgery, for injuries, and at the tail end of both of my pregnancies.  Today I'm looking forward to starting my next decade of running!

Just for fun, I went back and totaled up the past ten years.  I ran 9,176 miles total.  My highest mileage year was in 2007 when I ran 3 marathons and finished the year in 1264 miles.  My lowest mileage was in 2006 when I was pregnant with Pierce and preeclampsia kept me from running in the latter half of the pregnancy - I only got in 389 miles.

As for this December, my IT band injury has slowly continued to improve.  I'm not pushing it too hard.  I've mostly stuck to 3 and 4 mile runs.  I've had to do a lot more running on the treadmill this past month than I like, due to the boys being on winter break.  I'm hoping to get outside more in January.

Next month should be similar, with hopefully a slight increase in mileage.  And while I did make it to the track once in December (see the picture below for proof - the boys had fun playing on the playground while I ran in circles around them), I am hoping to do so again in January. 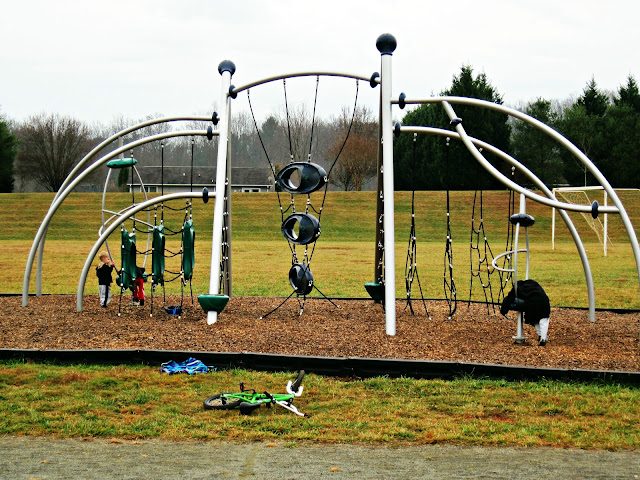 My overall year end mileage for 2012 is 1170.  I'm happy with this, particularly considering the injury that has held me back the past couple of months.  I met most of my 2012 goals: I PR'd in the half marathon, and I completed marathon #9.  The only goal I didn't meet was staying injury free.  Also for 2012 I lifted weights 44 times, did yoga 24 times, ab workouts 22 times, and Shred 17 times.

Now for 2013 - I am not actually setting any racing goals this year.  It's just too hard to do coming into the year with an injury.  So really my only goal is to get stronger, and to heal my IT band, and to just enjoy my running.

You are years ahead of me in goals, but I will get there someday! 3 years smoke free, and I'm walking instead of running. I hope to set new goals this year as soon as my knee heals. Happy New Year to you and the fam!!

Congratulations! What an accomplishment! And I can't believe you have run as many miles as you have! That is amazing!!! Cheers to the New Year!

Happy New Year!
Wishing you, your hubby and your little ones all the best for 2013!
Hope it is a GREAT one!!

10 Years Smoke free!!! That is wonderful!

I never smoked so I can't really relate, but giving up sugar was something that was very hard for me to do.

You sure have put a lot of miles on your legs.

Way to go Lisa trading smoking for running was such a great trade, you are one smart woman. You are doing so well I do hope your injury is better. You are such a good role model to your boys.
My daughter M ranand finished here first 5km last night in 41 min. That is the beginning of her resolution and I am so proud of her. I am going to send her your blog site. Hugs Happy New Year B

Happy New Year to You! http://theredeemedgardener.blogspot.com/

Congratulations on your 10 year anniversaries! I admire you!

I hope the new year brings complete recovery and avoidance of new injuries!

Happy New Year to you and your family!

Congratulations! Hopefully I'll be able to join you in some "third'ers" at that over-sized track before too long.

So proud of you Lisa!

Bright blessings to you and yours throughout the coming year.

congratulations, lisa! 10 yrs for both is fabulous!!!

i just finished my first year of running - just for health and exercise - at thanksgiving. but have had to take a month off to try to heal shin splints. only just now easing back into it. really miss it and hate the stodgy feeling i have w/o it. hoping i can avoid further aches and pains for 2013. :)

Congratulations on 10 years without smoking! I know it is so difficult to quit, so that is a huge accomplishment!

And congratulations on your commmitment to running. You are doing wonderful things for your health! May 2013 be injury free and fun for you!

I hope to enjoy life for another year.Happy New Year

It's so amazing and inspiring what you've accomplished in your running! So awesome.

It's strange that you still smoke in your dreams - I bet that is very unsettling.

Happy New Year to you and yours, Lisa. Hope 2013 is filled with lots of blessings for you all.

Congrats on stopping smoking. I hope that I can say --after 10 yrs--that I have kept my weight under control all of that time... I'm so proud of you... My Daddy smoked for about 50 yrs --and that is what killed him (emphysema)...

Just concentrate on getting stronger --and then you can make some goals.

Congrats on being smoke-free for 10 years! What an awesome accomplishment. Your running record is quite impressive. Running is something I've always wanted to do, but I tire so easily. I am thinking about starting the Couch to 5k again.

You really do stick to your resolutions. Congrats on the non-smoking. Hubby quick after he met me and I told him I didn't care for smokers. He's going on 6 years now. I don't make resolutions, but do try to set a goal for the year. Goals seem harder to abandon than resolutions. Same thing right? lol
Happy New Year!

You are just amazing to me, that you continue to do this with three small children. I think it is likely though, that it helps with your overall energy. Congratulations on the not smoking anniversary!!!!! How did you do it? You continue to amaze me. My mom had asthma, and quit cold turkey, though she always wanted to smoke again and loved standing in other smoker's smoke. Happy New Year, Lisa!!!

Congratulations from one ex-smoker to another. I quit 14 years ago! Hope to see you out and about more in 2013. Happy Running!

Congrats, Lisa! 10 yrs on both accounts is fantastic! Happy New Year's to you and your family! I have decided to have my surgery this year, actually in the next few months. I need cervical spine surgery and it's not really an option. I've been a big chicken. lol Anyway, I'm really looking forward to getting back to my work outs after surgery. :)
Hope you're having a great day!

A smoker! Good gravy, BabyGirl, I never knew that! I am glad you are still on the mend...keep up the slow, steady pace of healing, then this year, enjoy your running as you plan to! My plans? Gym/kayaking/Tai Chi and perhaps some volunteer work!...:)JP

It's amazing to think of you having run that many miles! I didn't know you had kicked the smoking habit. Congrats on the length of time!

You go Lisa!! I am always in awe of your running skills. I do find it funny that you dream about smoking. Great goals. I love when people set new years goals.

I used to run, but now at the old age of 44 I find that the aches of the hips/knees make me stick to walking. But, that is just not the same for fitness! Yuck! I am impressed at your fitness routine!

Wow Lisa! You are awesome!!! Those are some impressive stats. I've lost 16 lbs since Nov 1st and my goal is to lose 20 more lbs by May 1st. Low sugar intake and portion control are working for me and I hope to get back to more walking as my ankle allows.

I just want to get back to swimming! My daughter broke her foot on Halloween and I've had to drive her to and from school, which was my swimming time. :( She's better, so I need to get back to ME time. Can't wait.

Congratulations on all you've accomplished! I quit smoking 7 years ago, but I didn't substitute a healthy habit in its place as you did.

Sending wishes for a Happy New Year to you and your family!

GOOD FOR YOU! So glad you made the decision to stop smoking, it's a life affirming and giving decision.

Way to go on the smoking. I am at 5 years and praying my daughter/SIL will quit soon. (my daughter didn't smoke because of me, I started because of her!) You have accomplished so much, how awesome is that? No resolutions here but always want to declutter my home!

I see a relocation and career alignment with plenty of guitar playing. Congratulations on stopping smoking. Running is phenomenal, although I've been forced by injuries to cycle and focus on core strenghtening. I do miss it and admire that you are a stick to it person. That is wonderful! Stay with it!!!