The other day I had to take our cat, Disco, to the vet.  Disco is 15, but has always been fortunate to have good health.  However, recently in an effort to save a few bucks, I switched to a cheaper brand of cat food.  This had the unfortunate side effect of causing a mountainous erruption of pus-filled zits to swell all over Disco's chin.  After they didn't disappear over the course of a couple of weeks, I decided to take him to the vet.

For $104 Disco got a shot of antibiotics and some kitty-Clearasil.  And I learned, the hard way, the cheap cat food is not so cheap after all.  The twins and I returned home, a little poorer, and I let Disco out of the carrier and proceeded to make lunch.  Later, I went to grab the carrier to return it to the basement, where we keep such things.  I grabbed the handle to pick it up and WHOA it was heavy! 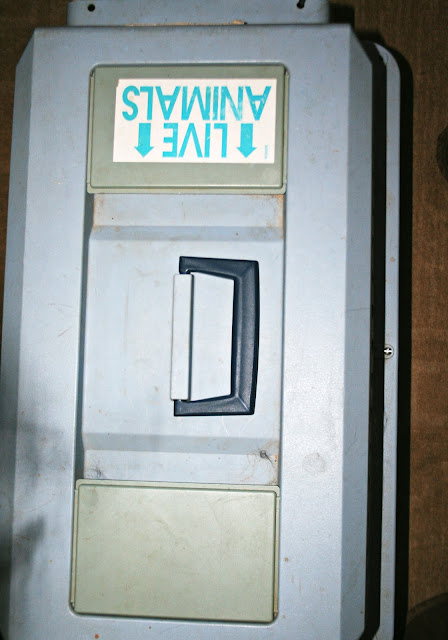 Out of our four cats, only one is chunky these days, so I said, "Baxter!  What are you doing in there?" All while wondering to myself what sort of crazy cat would willingly take a nap in a cat carrier - the one-way-ticket to the vet?  Imagine my surprise when it wasn't Baxter that crawled out.... 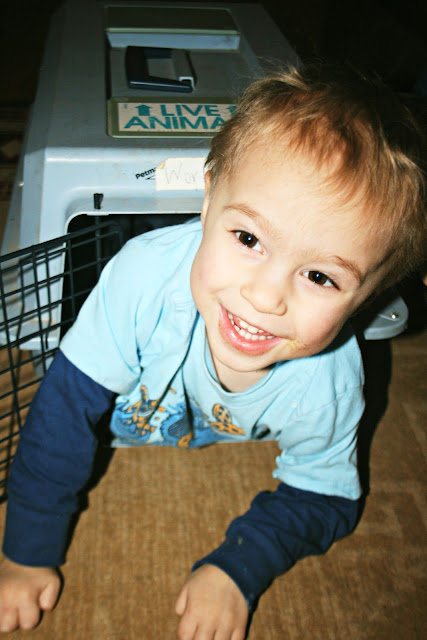 Who would've thought that a 3 1/2 year old could cram his entire little body into a cat carrier?

That's so cute!! Love that picture too!! Reading a post like this is a great way to start my day!!
Hope that Disco is feeling better soon!!

That is a riot! My kids like to crawl in the dog crate at my mom's house. Although, it is a bit bigger than a cat carrier ;-)

Aww that is just so cute! But what a surprise haha =)

love from the NANA girls xoxo

I love the picture of him crawling out.

pretty amazing how expensive it is to go to the vet! Hope you are back to the old catfood. So funny to see your little guy in the at carrier

My Daughter can only feed her cat one cat food or she gets sick every time.

Too funny! Just goes to show ya that most kids don't really need expensive toys to keep them occupied. Give them a box and they'll keep themselves occupied for hours! Great pic of him coming out of the box. He looks like he had a great time playing whatever 'game' he was playing, lol!

That must have been such a surprise. I love the photo of him smiling as he comes out!

Hope Disco is on the road to recovery.

Oh how cute- good thing he didn't get stuck in there!

My 3.5 year old could cram his body into anything! And look just that cute! He's 30 now and something he still acts like he's 3,

I can't believe he squashed himself in there!
Lesson noted about the cheapo-cat food.

oh my gosh!!! what a surprise! and what a gleeful face!

Oh Lisa you had me laughing uncontrollably this morning. I am glad you figured out the problem and your kids must make you smile everyday I know they make me smile every time I read about them:) B

Oh what a cute story... Yes---he is a little heavier than Baxter...

Sorry about Disco --and the cat food... We all try to save money --and sometimes it just doesn't pay. Too Bad.

Now, that is just hilarious! I don't know why, but I had a feeling. LOL

That often happens to me when I try to cut corners--an unintended negative consequence. :(

Too cute Lisa! Amy used to hide in the dog crate as well!!

We had a hen who decided to lay eggs in a cat carrier. I didn't know that cheap cat food would do stuff like that, probably from china and we don't want to know what is in it.

Oh Lisa! What a funny post. That was cute how you wrote it. Ya, most cats don't even get near those carriers. Mine sure didn't. Too bad you made that costly mistake. I did that when my cats were young (which lived to be 16 and 18 respectively). Fed them cheap food and my male developed "crystals" which is like kidney stones. Oh major cost and mess and ya.....

He repaired and lived to be 18 so hopefully Disco will be all better now.

Haha! Oh my goodness. I wouldn't think he'd be able to fit in there!

OH, this is a SCREAM!!! The last picture is priceless!!!!! Now down to business. We have three cats, and I want to know the name of the food. You can e-mail me if you don't want to put it on the web.

Cutest cat EVER! I hope the real cat is feeling better soon...I never knew cheap cat food could do that!

Cute picture!
Sorry that your cat had to go through all that. The more I read about pet food the more concerned I feel. The quality control is not good in many brands.

Sorry you had to pay so much. And little boys can get into everything. I didn't know that your cat was named Disco - good name.

Now that is just hilarious!

That is so funny. My three cats refuse to eat any cat food at all. We make their food which is not cheap.

oh that is fun!

I hope your kitty gets better! For years I had been feeding my dog Two Kibbles & Bits. When I got Jazz she was eat a high priced food that I really didn't want to buy. To switch her I had to feed them a little of this and a little of that. I ran out of Kibbles & Bits. My dog Two who was older and not looking good started looking really good and had the energy of a puppy again after eating that quality expensive dog food for a week. I was sold on the expensive food after seeing that. I hate paying $50 for a 40 pound bag of dog food but it is well worth it for my old gal Two who is 13 years old.

lol on him getting in the cat carrier!

Haaaa! That made me laugh out loud.

That is crazy how they can get themselves in tight spaces! That's so funny!

I didn't even see that one coming! Look at his face though, how happy is he that he fit in the cat carrier? Glad Disco is doing better.

Sorry about the vet visit. Glad you were able to find out why it happened. Love the new kitty :), that is too cute!

Now that is the cutest little kitty I've ever seen!

How funny!! Hey, I'm sorry that I didn't even realize you and Nancy had discontinued Rural Thursday! I really did enjoy participating. What I find hard about memes is reciprocating back to all the visitors. Then I feel REALLY guilty.

I do pop in to see occasionally, but obviously don't comment ;~)

Wishing you many Happy Trails~

what an adorable photo! sorry about your kitty, glad Disco is all better. :)

The last picture is so cute!!!

I have never heard of this kind of cat ailment before.
That last photo is a keeper. Funny what kids do.

Oh my goodness!
I can't get our cat in the carrier... I can not imagine a 3 1/2 year old fitting in there (wonder if I should talk mine into trying it...). How funny!