Last week I went to fill out some more paperwork for the part time job (I am officially hired now) and my Dad came to watch the boys.  Pierce had a two hour school delay due to ice (but was glad he still got to go to school, since it was stripes day and he was sporting his Where's Waldo costume).

Pop Pop showed up at around 7 am and was immediately tackled by some enthusiastic kids.  They made him read this Thomas the train book about 40 times in a row before I even left. 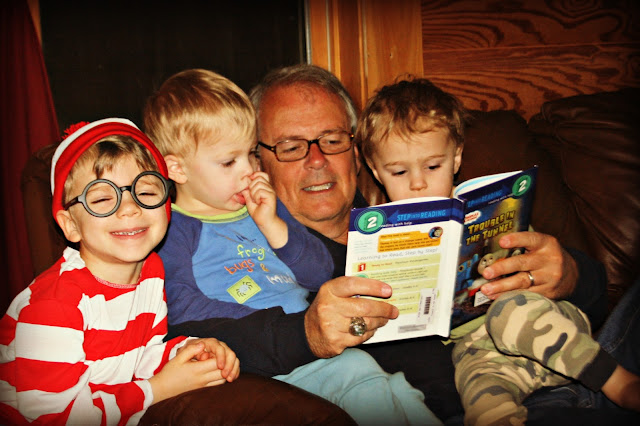 As for the job, they already have a case for me, which sounds like a good match if I can work out the hours with the client so that we're meeting when the twins are in preschool, or later in the evenings after Paul is home.  I'm excited to be making a difference in the community again, and will only be working around 9-12 hours a week for now, so it shouldn't detract much from family life.  In case you missed it before, I'll be providing emotional support and assisting those in the community that have difficulties due to mental health issues.  I will only be working with one or two people at a time and I may work with the same client for over a year.  I'm thankful to have found something that has flexible hours, is part time, and uses my background.  Because I've been playing the lottery for a few years now, and somehow, it just doesn't seem to be working out for me....

What about you, readers?  What kind of job fits your personality best?

Please email that picture to me. It's my favorite picture I have ever seen. PopPop loved being the babysitter that day :-)

I subbed this week for the first time in year at JDaniel's preschool. It was so much fun. Your job sounds great.

Congratulations Lisa you are going to be so great at this job.
I love this photo it makes me smile. The boys are in excellent hands. HUG B

If you have to work for financial reasons, try to do what you love. It makes for a slightly better home life.

I do social media.

How nice! Back to the working world. My daughter also returned to work after being a SAHM for 5 years. She is loving it and I know you will too. Congratulations!!

Congratulations again on your new job! It sounds like it will be a great fit for you. I hope that the flexible hours work out well :-)

This sounds so valuable helping someone else when they have some problem when you can give them time. Good for your Dad they will all have so much fun.

Congratulations! It is fantastic that you found a good job that has flexible hours. Love the pic!

My calling has always been some kind of investigative work -- I was fortunate to do that for quite a few years before I retired.

You and your dad look alot alike. :)

Isn't that a wonderful photo of Granddaddy reading to the grandsons??

Congrats on getting the job. Sounds perfect for you and your schedule. AND--you will doing something you are trained to do.. That's neat...

I'm really happy that you found something that fits with your passion and fits perfectly with your family schedule!

Oh congrats Lisa! I'm in the process of figuring out what I want to do when Julia goes to Kindergarten and Lauren starts preschool next year!

Congrats! Yay for employment - even if it's partly! :P

The boys do look SO happy in that pic. Adorable!

I love Pierce's costume! He looks so cute!

Is one of your twins sucking his thumb? I think it's sweet. Mica sucked his thumb for just a bit. long enough to sooth him through teething. I sucked 2 fingers when I was a little tike. In fact when my mom had me I had blisters on my fingers. I sucked them, while she was prego with me.

That photo is adorable. Good memories made with Pop pop. Congrats to you on your new job!

Congratulations, Lisa! I'm happy for you. And I know you'll be great at the job. You have such a passion for helping others.

The photo is priceless. The boys look so happy with their Pop Pop! And I love Pierce's outfit.

The job I have now (newspaper reporter) is a good fit in that I can write, ask people questions, do research--all things I love to do. And it's a weekly paper, so I don't have daily deadlines, which is good for me.

I was wondering about the job, but didn't want to be too nosy. That sounds perfect for you! Congrats. I hope it's all you want it to be. The hours sound very manageable.

Congratulations! That sounds like interesting needed work! I love the waldo costume!!

Its wonderful to hear your job is working out. Its great that their grandpa is able to watch them. Teaching preschoolers fits me totally. Hope you have a great day.

So glad that you have found a good fit!

What a wonderful job, and too bad the boys won't miss you! :-)

Congrats on the job! I'm glad you found something that fits your schedule and your background.

I saw an article about how chicken-sitting is becoming popular in Portland. I think that would be the perfect gig for me :)

I've never had a real job, but I did tutoring and library work.

This picture of your dad and the boys is just priceless!! Does he have a birthday coming up? If you get a fancy frame and maybe some embellishments it would make a great gift for him!! I am so glad about the job! I bet you will have some very interesting days. And even better, the job is all about HELPING others, how much better can it get?

Is so happy for you, BabyGirl! Work? Me? No thanks!

Partly employed and 100% awesome!
Glad it's working out for you!
Your boys sure look cute in that picture.

You have done good to find a job around here, I have tried all kinds of places and have given up as I am too old I guess. Glad that you got the job!

Lisa
It will be wonderful to know that your help is making a difference in someones life.
And it looks like you've got the best babysitter possible!
Waldo looks adorable!

Congratulations, Lisa. I'm happy for you and your future clients. I know you'll be such a wonderful help for whomever you're with.

The boys look so cute with your dad. :)

Glad you found something that will work out for you. Always nice to get back out in the mix...a little bit! I hope it goes well!

Congratulations, Lisa! They are so lucky to have you! Blessed is what they are.

I adore this photo! So much love!

Lisa-I'm so happy for you! Your new job sounds like the perfect solution! But I wanted you to know that you were already making a difference to those of us who are lucky enough to know you! (And I will send a note soon. I've done such a lousy job writing lately-but I will do better! xx)

Congrats on the job... Pierce looks cute there with those Waldo glasses... what a good grandpa your dad is...

I'm happy that this job worked out, Lisa. Congrats. I know you will be a blessing to those in need.

Congratulations! I bet your dad enjoyed his time with the boys. Love Pierce in that costume, he looks so cute. I would love to help people out with emotional issues. I don't have the education to do that but I do have the heart!

Congrats on the new job and the fact that you can make the hours work for you ! Love the reading the story pic! :)

What a noble position, Lisa, a much needed support that I wish were in more communities. Good luck with the new job, sounds like a very rewarding line of work.

Congrats on the job! It sounds perfect for you. That picture is just too sweet.

How cute is your dad with the boys piled on top of him. Papa's are the best! :)

congrats lisa, the job sounds like a perfect fit for you!!

amazing picture, everyone wants a little piece of pop pop and vise, versa!!

Good luck with the new job!
Love the picture you included!