My Horse Has Lyme Disease (Part 2)

Thank you, thank you, thank you readers, for your support and your research and your advice after I blogged last week about how my horse has lyme disease.  Many of you have emailed and asked for an update, so I thought I would share what we are doing now.

The preferred treatment for lyme disease in horses is doxycycline, but due to recent HUGE hikes in prices, it was not an affordable option for us.  I looked into ordering the medicine from another country, but there were a lot of obstacles and I finally realized it wasn't very feasible.  So I started doing a little more research on lyme disease.

Ironically, my husband and I had just watched this documentary on lyme disease called Under the Skin, the night before Phoenix's lyme disease test came back positive.  One thing that struck me in the film was that people may look like they are doing just fine, but might be in a lot of pain.  I worried that Phoenix was in a lot of pain and I didn't know it - his only symptom being mild lameness at the trot.  My vet tried to reassure me, saying that Phoenix would let me know if he was in pain, but I wasn't so sure.

I discovered when doing my research that amoxicillin is the second drug of choice for treating lyme disease.  It's what they gave Pierce last summer when he developed a bulls eye rash on his leg.  And I met someone who is allergic to doxycycline that has lyme disease, and she said they treated her with amoxicillin.  I called my vet again (I hope he's not getting sick of me!) and he agreed to do his own research to see if it made sense to treat Phoenix this way.  In the end, we decided to give it a try. 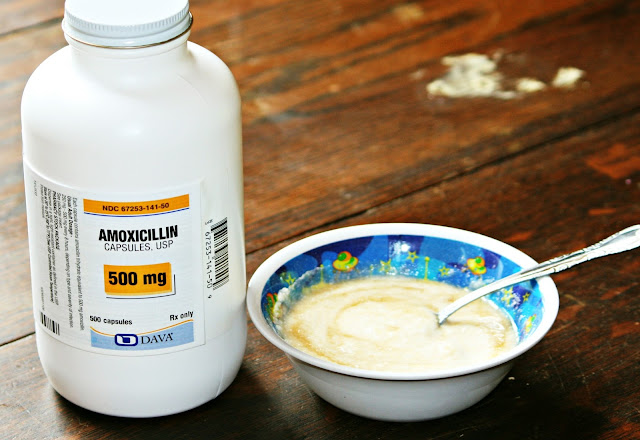 Sneaking 16 amoxicillin pills into a horse twice a day isn't easy.  First I tried mixing the capsules with applesauce.  No way.  Then I tried adding maple syrup and alfalfa pellets.  Phoenix gave me a look of disdain, and then kicked over the feed tub!  Then he turned his butt to me!  Hmmm.  I got that message loud and clear.

I then went to the feed store and purchased some extra yummy sweet feed for him - full of grains and molasses.  That worked for two feedings and then he was over it.

I guess I'm going to have to stop playing nice.  I bought a large syringe (no needle), and am going to try making a paste of the pills mixed with water and molasses, and shoot it into the side of his mouth in the same manner you would deworm a horse.  I hope this method will work.  Obviously, the antibiotic treatment won't work if I can't get the medicine in him.  I guess you can lead a horse to grain with sneaky meds in it, but you can't make him eat it.

Thanks again, readers, for all of your support.  The whole situation has been so distressing, but your kind words and emails have meant the world to me!  Thank you.

I am glad you found another alternative!

I hope you find a way to give it to him that works out for both of you!

Oh Lisa I am so glad you at least have something to try I am sure it will work if you can get it down. With our calves we use those big needles to give them vitamin paste when they are abandoned like Annie she did not like it either:) I am glad you have something. Hug B

Giving a horse medicine sounds just like trying to give some children medicine!

Have a wonderful day Lisa

So glad you have found an alternative drug for treating Phoenix! Any chance your vet has another formulation, an injectable one?

So sad Lisa!! Any way you can get him to take it sounds good. He needs to be healed.

I am praying that this medication will help him. ((HUGS))

oh, i hope this will help! and phoenix sounds as bad about taking meds as my one dog, louise. she won't touch cheese - just in case it might hold a pill. spits, gags, froths at the mouth when i push them in. ugh!

I'm glad you have found something that might work- that is good news.
I went to the feed store and bought food quality diatomaceous earth for our elder mare. I hope it helps, but at this point, I don't have much hope.

Pilling animals is tough. I just had to give my cat Akua antibiotics. Luckily he chewed them down in his soft food. Good luck and best wishes.

Lisa, I will be thinking good thoughts and sending prayers for Phoenix. the amoxicillan certainly sounds very promising.

I had to give Waddles meds like that--with a syringe. I remember smashing pills, mixing it with a thin gruel of food and giving it to her (over her protests!) that way.

Thank you for the update!! Fabulous that you have found another treatment! It seems that this would be harder to give him than a pill, for sure. Here is a stupid idea, how about cutting a hole in an apple? Let us KNOW when you have found a good way.

I really hope this works! I bet it is hard to get that many pills every day into his mouth!

Wow! It never occurred to me that lyme disease could get a horse too...what mess. Glad you are on top of it though!

Brilliant! I hope it works!

I know the doctor prescribed amoxicillin to my husband as a preventative for lyme after he got a tick bite causing a big welt. Good luck!

Oh sweetie - I hope he takes it for his own good! Let us know. sandie

So very sorry to hear that Phoenix is sick. Though, it does sound like you have a great vet, who is willing to work with you. Hope you get good results with the meds!

I went through lyme disease last spring with my elderly mare. Fortunately, she ate the doxycycline without much problem. Here's how I gave her the pills: http://peevishpen.blogspot.com/2012/04/horse-pill-how-to.html

Ugh. I hate it when they fight you!! I hope you can figure out a way to treat him...otherwise it's gonna be a long battle. I have that with my cat. Long after I thought I got the pill down, I'll find it in the living room on the rug. Darn thing.

This is good news! Keep us posted!!!

I hope the syringe works for you.
That is what we had to do with our donkeys.
love
tweedles

Baby Girl, knowing what Phoenix means to you, I know this will work!...:)JP

Good luck--that's a LOT of meds--but he is a horse!

That's so sad! I'm sorry to hear he has Lyme Disease!

It has to be hard getting him to take that stuff in. You know it's hard even getting a baby to take in liquid med. People have problems with dogs to. A horse is so big though.

I had a student a few years ago that had Lyme Disease. She was tired a lot, ended up missing school often, and chose to drop out. :(

I am just catching up on blogs and was sorry to hear about your horse. I think that this disease has been with us longer than we suspect and was just written off to arthritis or other ailments.

Really?? Oh my gosh, I had no idea that a horse could contract that... but it makes sense. Hope you find the right treatment...

Oh no! I have been a terrible blog reading friend so I have missed all of this info. I'm sorry your horse is sick and I hope this new method of treatment works!!

I'm so sorry about your horse! I do hope that this medication works quickly and effectively!

I'm so sorry to hear this! I hope this treatment works!

I hope you can get the antibiotic in. Can't be easy with someone who is bigger than you, and obviously stubborn!

If only we could assure them this is all for their benefit -- I know you will get those pills in Phoenix somehow.

Maybe you can find something helpful on iherb? http://www.iherb.com/ Not sure they sell medicine, but they sell healthy stuff, so maybe there's something there that you could buy, vitamins or so..