After a rough start to the  year, my approach to May was to just tough it out.  I decided to push some on my running and hope that things got better.  As a result, I had many runs on very tired legs that I just forced myself to run anyway.  On a couple of days, I ran twice - once in the morning and once in the evening.  Did it work?

Well, I can say I had a week mid-month that went very well and I was feeling much better.  But then I kind of dragged again the week after that, so I'm not sure.  June will be a cut-back month for me, and I'm hoping to see my legs bounce back.  At any rate, I'm pleased to see my mileage higher (because I'm behind for the year!) and I don't seem to be having any injury issues, so that is a positive.

I also treated myself to some new running shoes this month.  They are PURPLE.  Not my usual choice, but it was what was available when I ordered them online.  And they seem to be doing the job. 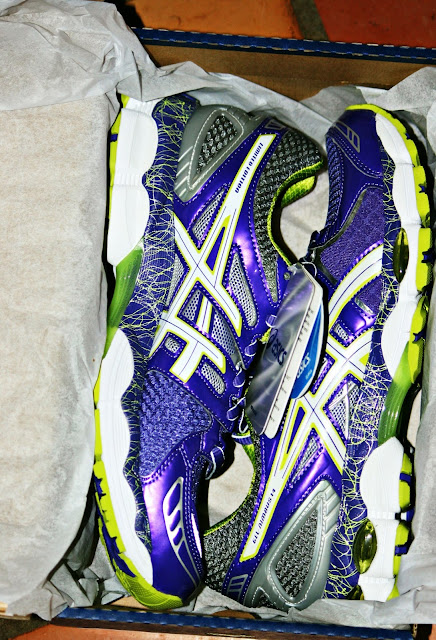 A part of me has missed all the racing this season.  By now I've typically run several races.  But I haven't done a single speed workout, so I wouldn't be ready.  June is going to be a very busy month, but I hope I can hit the track a time or two.

Readers, are any of you behind on your goals for the year?

My Daughter has gotten back into running again. I don't think she puts in the miles that you do though.

Seeing these purple sneakers reminds me how I wanted to keep mine clean! LOL!!!...:)JP

Not sure if you got first comment....those remind me that I wanted to keep my gel nimbus' clean!!!!...:)JP

I am so behind. I think I need to rethink them.

I've stopped setting goals, I'm going with the flow and I, personally, like it better this way! I did however had my 1st jog last night (well, my 1st in a looong while).. needless to say, I didn't last long.. going again this evening!

they look blue not purple. wish you well with your new kicks!! ( :

Love the shoes!
My daughter is always buying a new pair of running shoes :)

I have some daughters that like to run. They get it from their dad. I would rather walk :)

I have a goal to walk 3 days and start some kind of strength training for three days, I need it badly!!

Good Luck with your goals!

Lisa,
I am an avid walker and had a great May.

Later this month I will walk in my first 5K Fun Run and Walk.

I just have not got the courage to run ... yet. Walking is so enjoyable it seems like I hit a wall when I think jog.

Neat shoes and have a wonderful June.

Well I thought you were doing great! sandie

I love your shoes, Lisa! I've noticed lots of bright shoes around town lately-turquoise and orange and lime green. They make me smile!

I'm glad the weather is getting better-I'm enjoying going for more walks and working in my garden!

tried to pick up my walk/jog pace to 3 miles and sometimes 3 1/2. damn shin splint flared again. i miss the days when i could run...

Oh Lisa I think you are doing very well for working with that injury I think things will get back to normal soon.
My goals well I worked on one this morning keep your figures crossed for me. B

WAAAY behind on my biking mileage! I was shooting for 400mi/mo and I have been nowhere near that. I haven't done a t-shirt ride yet, though one is scheduled for Saturday.

Your activity level is impressive. My goal is to walk 30 min a day. Don't laugh! And no, I'm not meeting it because it's too hot already. Love the shoes!

I think you're doing great with your running! And i love the color of those shoes. I got a new pair last year before my foot started hurting. They're kind of a turquoise--not real excited about the color.

As you know, I'm still in the boot. I go back to the doc on June 14. Hope he'll turn me loose from the boot and I'll just have the weird fracture shoe to wear, hopefully just a couple of weeks. Then I will walk for a while. I want to lose some weight before trying running again.

Cute running shoes! I like the colorful ones. I hope you can get back on track with the goals you have set for yourself, but as it is I think you are doing a darn good job!

Love your shoes...and your determination!

The shoes are good inspiration, the purple's rocking. :)

I'm kind of where I want to be right now. My boss approved that I can take 1/2 hour lunches and leave early on Fridays. That will be so nice! Then I can get things done.

Congratulations on more running! I love the purple shoes. Hope you have a good week.

Wow you have done a lot of running, etc...like the purple myself

It's hard for me to relate because I'm not a runner, but my daughter has that itch to be out there doing it too when she can't, so I kinda get it.

You're such a blessing, Lisa. I love reading how you're doing on all aspects. :)

I should get a new pair of "walking" shoes.

My goal is to walk and hike. I was never a runner --NEVER (except when I was a child)...

Yea for the new shoes and no injuries. I am wondering where you swim. Such a good mix.

Don't you just love new running shoes?! I always love the extra bounce they seem to have!

I will loan you a scythe and you can really get a work out cutting your hay and make your husband happy at the same time. I can feel it in my legs after I cut.

NICE shoes!
I just started running outside again last week and I've been pretty good about getting out 2 times a week. Today I brought my oldest with me and he beat me by a country mile, but I didn't care and he was pleased with himself, too!

Funny I just blog hopped here via your badge on Rural Journal. The funny thing is I just ran my first and last 1/2 marathon. You have my admiration. Getting ready for this one run started in October. I enjoyed doing it, but it will be my last and knee pain this last month made if unbearable. Still I finished. Your post was inspirational. Thanks.

Those are fascinating running shoes. Very fancy! Designed for a very dedicated runner.

I'm a bit too 'mature" for much running. Besides, in my life a lot of people have given me the run-around, so i've done a lot of running in that regard.

I am in awe of your determination, Lisa. I hope you feel well and truly satisfied.

I only recently started running, and am quite slow. My goal is to run an entire 5k by the end of this summer. Right now I can only run about half of it. Good luck on your runs!

Well, you've run 112 miles more than me! Sometimes you just gotta do what you can do. I know it is disappointing not to get those fitness goals met, but sometimes life and injuries just get in the way. I hope you can turn it around now.