Where the Wind Blows - Random Friday

1.  This is the old Aermotor windmill at my inlaws' house in Nebraska.  Classic, isn't it? 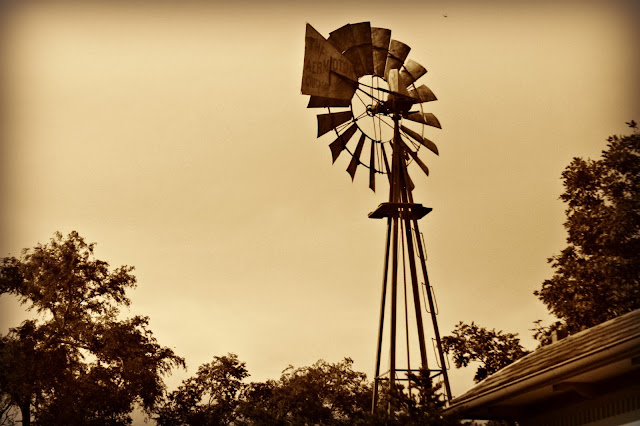 2.  Pierce had a summer reading program through the school where he had to read 20 books to earn a water party.  The parents could even read the books to the kids.  And they didn't have to be long books.  Would you believe that out of 17 students, only one other kid in his class completed the program?  This is so depressing to me.  Why aren't parents encouraging their kids to read?  At any rate, the first and second grade classes were combined for the water party (and hopefully some of the other classes had better participation) and Pierce had a fabulous time.

3.  I made monkey bread for an after school snack the first day of school.  Pierce came home and said he didn't like monkey bread.  I was like, "Sure you do."  He was adamant, "I don't want any."  Then I realized....I think he thought it really had monkey in it.  Once I explained it was just cinnamon bread, he was happy to eat some.

4.  Cort is obsessed with pirates.  We put away most of their birthday money, but I did allow him to purchase a small Captain Hook doll that he wanted.  He carried it all over the grocery store, and when people said, "Oh what a nice Captain Hook doll!" He responded, "He's NOT NICE!  He's a bad guy!"

5.  I planted some fall seeds, and I'm hoping we will be successful with them.  It was such a nice treat last December to still be able to run out to the garden and harvest fresh salad.

This post linked with Random Friday at A Rural Journal.

It IS more than sad that parents do not encourage reading more. While In FL with Sis, she and I read seven books! Why is it called Monkey bread??????....:)JP

You don't put real monkey in your bread?
Read books? They can wait for the movie to come out.

It is depressing that our kids don't read like they could- even with reward programs...our school gives out WM gift certificates, but few participate.

That is so sad about the summer reading! I can't believe this is an issue for so many people. I love reading with my kids. Pretty funny about the monkey bread! Have a great weekend!

Reading is Fundamental! :) How can children SPELL if they are not used to the written word...I am as dismayed as you are

I just dismantled my fairy garden that I had in a corner of the front porch in a huge tub yesterday...and planted Salad Bowl Lettuce seeds! :)

that is sad about the reading. i always loved reading to my kids. i loved going to the library and checking out tons and tons of books for us to read together. now that they are older, they don't really want me to read to them anymore. the boys are all readers but ashlyn hates to read. i don't know why. i think she's weird ;)
love the comment about the captain hook doll lol...and too funny about the monkey bread...i wouldn't want it either :D

That is sad that more kids aren't encouraged to read.

I love monkey bread, but I'd be like Pierce if I thought monkey was in it. :-)

That is a lovely photo! It looks like one from the Great Depression era. Very nice edit.

My kids love the summer reading program, but in order to encourage participation and successful completion, I think they make it too easy. My oldest completed the program in less than 2 days. Seriously. But then again, she IS my reader...

I Love looking at those windmill...maybe because I have a small obsession with farms! I bet the monkey bread was divine. Kids are funny at how literal they are!

That's so funny about the monkey bread! It really makes me sad about the reading too. I spent SO much of my childhood reading...things are too techy now!

I LOVE monkey bread. But I don't use real monkey in mine either. Enjoyed reading your post this morning..

The windmill photo is so cool.
I'm a little shocked too that more parents aren't encouraging their kiddos to read; they are missing out!
LOL@your pirate boy and the feeding of monkeys!

Between bad pirates and monkeys in bread this post left me laughing.

What a shame about the reading...
Your son's Hook doll story is funny stuff. I can imagine the looks on people's faces!

My children loved the summer reading program! Both boys are active leaders in our library now, helping out with the teen book club and Family Game Nights every month.

I was a Title One reading teacher early in life. I am shocked the teacher didn't talk it up more. Many say it is too hard to find 15 minutes to do this, but yet spend a few hours in front of the TV.

I noticed a huge field of lettuce plants today near our place, 100's upon 100's our local producers hard at work but from your own garden, even better, funny monkey story, and C. Hook is a bad guy ;-).

Kids will be more inclined to read if they like the subject matter. Reading classes use books that were chosen by dome heads in offices because the stories were politically correct or pushed someone's personal agenda. I taught my hard core "reading sucks" kids by getting magazines on the things they liked. Guns, Nascar, hunting, that sort of thing. I taught at a very rural school with some rough characters but even the huns would read if they were interested. I had to cover my six by getting permissive letters from the parents but I never had a single one refuse. The girls were not that picky and would read books from our school library. It was the boys who were the challenge.

Love the windmill....
That is depressing about the books but I'm glad you participated! Love the monkey bread story :) Have a wonderful weekend.

Captain Hook is most certainly a bad guy!! :)

Nebraska is a pretty place to visit, we've been and I always enjoy it. I like the picture you took being in sepia.

That is sad about the reading program. Too bad more kids didn't participate. SO funny about the monkey bread :)

It gets way to cold here to harvest in December. We usually have a snow fall around October. Lucky you!

Poor Pierce! What is wrong with parents?!

Beautiful windmill. I haven't seen one in years!

It's quite shameful that parents aren't helping with the reading at home. If they don't want to hear the child stumble over words, they can read to them as you said. However, it's so much better to sit quietly and listen to the child. The teachers here are big on reading; however it's sad to say but Hunter's school went from an A school to a D after the FCAT scores were completed. I bet a lot of that was reading and very sad.

Have a great weekend, girl with your guys. :)

I used to read a looooot when I was a kid, I still read now, quite some, but also have periods when I don't feel like reading at all.

I am an avid reader. I liked to read when I was in school, but struggled with it. When I graduated college, and I could read anything I wanted, I instantly loved reading. My nose is in a book as much as it can be. Yea to you for making reading a priority and congrats to Pierce!

I am glad to hear you are not eating monkeys at your house and got that cleared up with Pierce. I probably would have had the same thought at his age.

Oh my gosh, I love this!!! I could just live on your stories about the boys! As our girls are now 7, they are not saying as many of the really funny things. LOVE the monkey bread and pirate stories!! I HOPE you are writing them down, because you will NOT remember them all!!! Then it makes a great gift to his new wife when he gets married. LOVE the windmill, we have them around here too. People even have the little ones in their yard for decorating. I cannot BELIEVE the reading program!!! And they had all summer, it is just not right...

Kids are just too cute....we could never get around a story per night with our granddaughter...and my girls always read...still do. And I feel like a fish out of water if I don't have something I am reading on.

That is so sad about the reading program. I think parents are too busy on the computer or their phones to care about working with their children during the summer break.
That is too funny about the monkey bread.

Hey, what a double take! Is this a new header? I feel that I have seen it before, but maybe you have had it a few days by now. Wonderful, especially the possum petting,

My kids loved the reading programs and going to them but they still don't really like to read. They love it when someone else would read to them but for them to pick up a book and read it just isn't going to happen... I was the same way though. Funny about the monkey bread! My boy loved it when my husband told him he was eating alligator meat this summer but it was just regular ole cow! lol

It will be wonderful to have fresh veggies for a salad. Hope you have good success with the seeds. Bless Pierce for thinking there was monkey in the bread - lots for a little fellow to learn! You are blessed with sweet and handsome boys!

I cannot believe the 20 books thing and hardly anyone did it. We read soooo much that it would be a given!

Pierce is very logical. It makes total sense that monkey bread would have monkeys in it! :)

Oh, that is so cute about the monkey bread! I guess we have to be careful what we call it around children! :-)
That is really sad about the lack of participation in the reading program. 20 books over a whole summer is not very much... if they just read one book at bedtime, they'd easily reach that number in less than 3 weeks!! My parents read to me every day when I was a kid. And we read one or two short books each night to our kids, or else a longer chapter book over several nights. Bedtime stories only take about 15 minutes for pete sake! I read to them during the day as well, and encouraged them to read on their own. That is the teacher in me, I suppose.

That is HORRIBLE that nobody else read the 20 books! At that age, they should have been reading 3 or 4 a night. So sad. I wish parents would turn off the tube and the cell phone and pay attention to their children!

I agree you have to teach your kids it is fun to read. And how cute about the monkeys! Sandie

So cute!! My son is five and says some pretty outlandish things at times too. My mom loves Peter Pan and especially Captain Hook--he IS the bad guy... I never heard of monkey bread, but it sure does sound good. How funny...I figured it had to have bananas in it!

Mica read so many books this summer! He's been cool about reading to Isaak at bedtime to.

That's funny if he really did think there was monkeys in monkey bread.