1.  Look at the adoration.  He's just waiting to hear his next command.  His expression is one of absolute devotion.  This picture is another interesting shot from the album at my grandmother's house, likely from the 1940s.  I love the stern old man, with his directing finger, and the truck in the background. 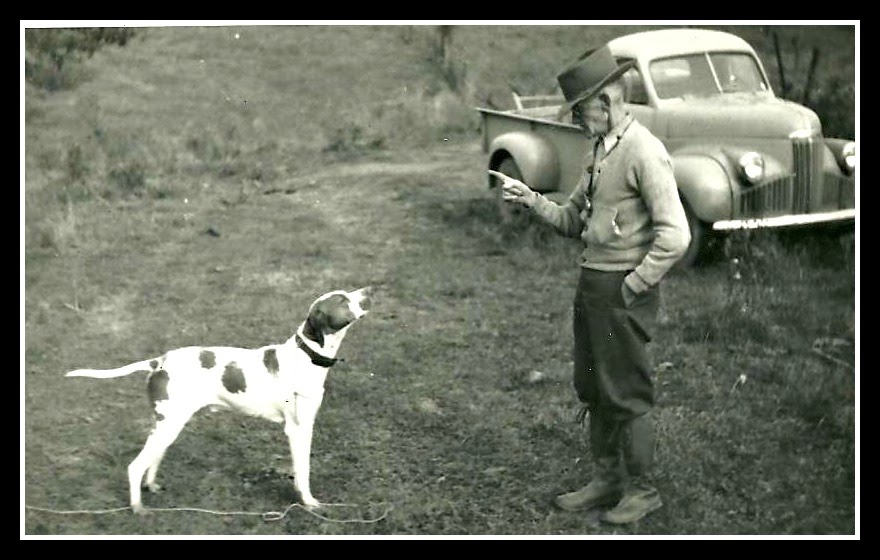 2.  Pierce was making a bracelet for his teacher, and said he would have to make it a little bigger because she is 94.  I thought this was so funny.  At some point, it seems she said something that made him think she is 94.  I told him that if she says that again, he needs to tell her she can't be a day over 30.

3.  We were driving through some thick mountainous fog recently, and I said, "wow, it's foggy!"  Cort said, "Can you really cut it with a knife, like on Scooby Doo?"  I was confused for a moment, and said, "Cut what?"  Then I realized he really thought we could cut the fog with a knife.

4.  Our wood stove is very drying, so we've taken to having lotion parties before bedtime, smoothing lotion over all the itchy spots.  One night, Pierce reported that he was "putting lotion in his knee pit".  Hey, it makes sense!

5.  I miss having chickens.  It's been much too long.  I think an order of some chicks is going to be a must this March.

Good Morning, Lisa. This is a great old photo. My dad always wore a hat like this man.
Such cute things from Cort and Pierce! Hope you guys have a nice weekend. It is 10 degrees here in GA this a.m.

That is a really good photo and it is a 1946 Studebaker or close to that year. Looks like the top of a buck saw laying in the back.
94 or 30 it's all the same when you are that young.
I hope it warms up by March! It was 5 degrees when I was putting wood in the furnace at 4am but has soared to 6 degrees now.

Hmmm...Pierce seems to favor "us older" women...LOL! Love the boys referring to cutting fog with a knife. You and chickens are a good fit...order some. The old picture reminds me of me with my GSP...and yes, she was the picture of devotion...:)JP

I didn't realize you didn't have any chickens right now. Yes, you need to order some stat! :)

Love the kids' observations. Have a great weekend Lisa.

how come your don't have chickens? did they pass or get lost? so curious. i love the old picture. so cool! ( :

Oh I LOVE that photo yes it is a devotion shot for sure and the truck is amazing.
Lotion parties sound just about right.
I love Scooby Doo and cut with a knife is a very fun idea.
94 yrs that is funny.
Chickens in the spring will be nice. B

Love the photo Lisa, and I know exactly what you mean about lotion parties! Knee pit, I may have to borrow that!

Things and people do get dry in the house this time of the year. Even with a gas fireplace we get dry skin. Maybe put a kettle of water on the stove to get some moisture in the air... that's what we are going to try. Happy Random Friday!

LOVE this photo. It isn't your Grandfather??? Just a great photo? In my mind I have captured scenes like this with many of my family members . . precious to me.

In March, surely it will be warm again, hm???

Love that photo!
Your kids are so funny. Lolo coined the phrase "knee pit" as well as "elbow pit" at our house. LOL. She also used to say: Chesticles. Still makes me laugh.
Stay moist! ;)

What a wonderful old photo! Pierce sounds like he is going to like older women. ;) Winter makes my skin itch ... I can relate to lotion parties! important to not miss the knee pit!

Knee pit...now that takes me back to my early adulthood when I used to watch Ally McBeal!

Your boys have such cute observations! You're teaching Pierce the right way to approach a woman's age. And who knows what Scooby Doo can teach us? :-)

When Larry was building the raised bed garden, our next door neighbor asked what he was doing. He said he and his wife had been discussing whether it was a garden or a chicken coop. I don't think our town's zoning laws allow for chickens, though. :-)

That old photo is amazing! Oh and love the sweet children's comments - out of the mouths of babes...:)

Knee pit. LOL !! One of my daughters was adant about "cleaning her pigs" every night. This meant cleaning out from between her toes.
And yes, you do need chickens. They pay for themselves and take pretty good care of themselves too. But they do need good protection from predators.

When asked how old I was when teaching I had them guess and always went with the lowest age. It kept me younger, LOL.

I LOVE to hear what your boys come up with.....such smart little guys!!

That is a GREAT photo! Perfectly composed and pretty sharp for that time. Love the dog's focus on the man's command. Wow.

Kids are so funny...and they think literally.

Love that photo and the dog was definitely devoted to his owner. Love the "cut it with a knife" comment :)

Knee pit - too funny! And yes, you do need to get some chicks this spring!

A great post! So full of fun and enjoyment.

OH,do the chickens! I Love mine! And you already know you can't beat the taste of those fresh eggs.

Hahaha... cut the fog like a knife. I haven't heard that in so many years and to think your son heard it on Scooby Doo

What a GREAT photo!
LOL ... I just loved hearing what your kids say!!
They are so honest and funny without even trying to be!
Have a nice weekend!
diane @ aug's blog

LOVE that photo, and your kids. They are just too cute and funny. :)

LOVE that photo; it's fabulous, Lisa!

I grew up with a wood stove in the house. It always dried out my contacts like none other.

Lisa, I run a couple of big steam humidifiers this time of year for my ferrets. They need moist air or their skin itches. Maybe one or two of those might help?

Stopping by and just blog hopping! I love the puppy dog shot! The lotion idea sounds great, I should do the same. Have a happy weekend!

You should tell the teaching she looks good for being 94!
I remember watching Scooby Doo with Andy.
Knee pits - I get it!
Do you eat your chicks???

A nice old photo. Your sons are so funny!

I love hearing about what your kids come up with.

Wait . . . I hadn't realized you were chicken-less right now! I must've missed the reason. What happened? I loved your chicken stories (and pics of Elvis and the others).

little kids are the cutest!!

Such a funny quotation, Lisa! Kids have great imaginations!! :)

Our girls had knee pits, too! What else would we call them?

The photo is fabulous.

Wonderful old photo. From the attentiveness of both dog and man, it looks they are both enjoying the exercise.

And I am sure that 94 year old crack brought a smile to his teacher. Definitely made her think what sort of reference she had made.

I hope you get some chickens soon. :)

We lotion up all winter too, even in the knee pits. :)

That sure is a beautiful photo. i love the dog and old man. I bet they were best friends. Lol, for baby chicks. i miss my hens. I was thinking about getting some chicks this spring but my husband is against it. He said it keeps us tied down.

Love the photo of the man and dog. I always find old black and white photos very interesting.

I had to laugh at your kids' comments. They are always so honest with their thoughts.

Isn't it sooo fun to have little boys around! I love recording their lives blogging ...looks like you do too! they will love reading this someday!!!

Love that old picture , it's great !!
Yes get those chickens !

Hope your fog situation gets better. We are still battling horrible wind.

We have a corn stove. It does get dry in the house. Your lotion parties sound fun. The words of kids, lol!

Out of the mouths of babes!
You'l be happy you saved their comments like this.
You can read them at their wedding, or something!
(ツ) from Cottage Country Ontario , ON, Canada!

He looks serious...the dog...uh...not so much. why do I think there is a treat in that pocket?

I LOVE old photos--so interesting. My son loves Scooby Doo (so did I as a kid). I think I remember the exact episode where Shaggy and Velma say you can "cut the fog with a knife."

I love the "kneepit"! I met a child that once said that their butt burped. A much better choice of words than fart.

A very cool old photo!!!
Are you going to get some hens?
We hope so,,, !!
Lotion at bed time is a wonderful idea!
love
tweedles

I love looking at the old pictures you've been posting. I'm always fascinated by old photos.

I just love old photos. That one is great! I'm going to have to get more chickens after this rough winter. Of course, the one in the kitchen is just happy, happy!