After our entire garden got demolished by weeds last summer during our two week journey to Nebraska, I have been thinking long and hard about trying layering gardening.  Ideally, I would've done all the work last October.  But October is a busy month, and then before you know it the holidays roll around, and it just didn't happen.  No matter.  I am trying to pull it together now.

Our garden plot is rather large, which makes the prepping a rather huge project.  First, the boys and I got in and pulled any oversized or very tall weeds.  Then, we took piles of mulch hay and did a layer over the entire garden. The mulch hay was disgusting.  Slimy, blackened, moldy.  It's good, though, that it was already partially decomposed, since I am starting this process a little late in the game.  After the mulch hay comes a layer of 3-4 sheets of newspaper, followed by a layer of wood chips.  We ran out of newspaper, so I only finished 1/8th of the garden.  Still, it was a lot of progress for one day.


Doesn't the corner I finished look good?  You can see all the gross mulch hay around the edges, just waiting for the layers of newspaper and wood chips.  And by the wheelbarrow, last year's pulled brussel sprouts, which didn't quite ripen in time for harvest before winter. 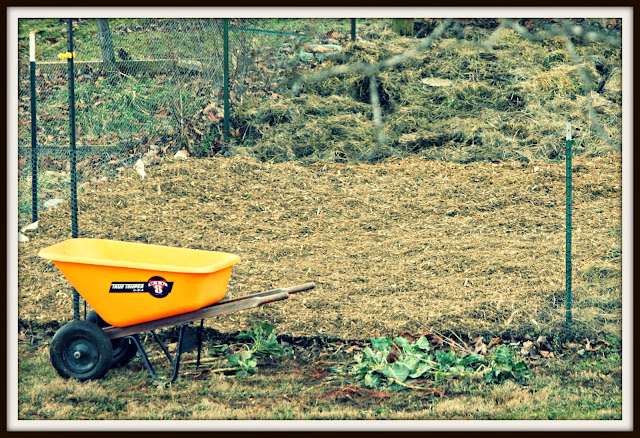 Once the newspaper and mulch is finished, then you put a layer of compost, and let it sit and stew until planting time.  Hopefully it'll break down enough over the next couple of months to be ready come the end of March.

Readers, are you making gardening plans yet?

This is what we're doing, but in raised beds. I'd love to have a garden the size of yours!

Wow, a yellow two wheel wheelbarrow! You are just showing off!
I have used mulch like that especially around tomatoes as you don't have to stake them but let them lay on the hay. The only down side in my garden was that slugs just love to live under mulch and come out to eat plants at night. So I don't mulch around the plants that they eat such as beans, lettuce and others.

That's good that you're getting it ready now. It'll make things way easier when the time comes. :)

You reminded me of that chore on the list...get the planters ready in the garden. The plan here is just mixing in last years horse manure. I've got a nice sized pile of it in the garden area. Need to assemble several more raised beds too and hoping to get to it this coming weekend. Spring is right around the corner!

Fun that you have little garden helpers :)

Yes! Gardening! Unfortunately my garden is under quite a bit of snow right now...but I do like to think about planting - it helps me survive January...and Februrary...and March :-) Right now I am devouring the seed catalogs, and wishing that I had gotten more manure to put on the garden in the fall. But, I am ready for a new year! Maybe this is the year I will defeat the bugs and keep up with the weeds...ha!

looks as if you will have a great garden when the time comes.... hope it will be soon!

That is quite the process. Good luck next Spring!

A lot of hard work but I know you and your family will enjoy the fresh veggies. I love that your kids help prepare the garden and that you have introduced them to a variety of foods at an early age.

I really wish I had a gardewn like yours. I would have loved to jog and plant my fruits/veggies!
xo

Fun to start so early.Mine is covered in snow still.

You got a lot done! We are talking about the raised bed, but we haven't done anything yet. We need to get the dirt in and start getting ready. It will be an experiment this year! :-)

I'm still amazed the weather allows you to DO THAT right now.
We're under a foot and a half of snow, so I can only lust over seed catalogs.

i finally began a compost pile here last year and have no idea what i'll do with it. so, no. :)

Sounds great... Hope you can keep the weeds out... We have more than our share of those pesky weeds.

Cold here this morning. Was MINUS 2 about 6 a.m. Yipes!

gardening is a lot of work, I something like this in a garden a long time ago and the results were stunning everything grew higher and larger, you'll be well rewarded for all of your efforts at 2 Bears Farm and the Three Cubs!

That is a large project! Good luck.

My only thoughts on my garden now go to the plants I've been covering up from the freeze and hoping they make it. Still, I see weeds poking though. Hardy little devils. You have a nice area for gardening. Hope your layering process is successful!

It does look good. That's a lot of work but definitely worth it to keep those weeds out!

Great project! I have been saving cardboard for this. Please wear dust masks when working around that mold! The wind has been blowing so much ately that I can't imagine putting anything on the ground and expecting it to stay there

It looks good so far! I've never tried this method before but know that others have had success with it. Good luck!

Well, I thought I would rent a rototiller and disc up part of my meadow this Spring. Maybe try something other than Indian Corn, which is all I've ever successfully grown.

I can't keep anything alive so no gardening plans for me. I'm very curious to see how this turns out. It does sound like you got a lot done!

You know, Baby Girl, I really thought that the Pres would have a garden here, but he said prepping is just too hard here because of all the rocks. So, he continues to go his best friends greenhouses and fields and get what he wants for produce...:)JP

I wish I was as ambitious as you! I feel like I am doing good to keep my grape vines alive till spring...I can't grow anything anymore for the bugs and blights and blossom end rot, and chickens pecking away at my tomatoes. SIGH.

Yes it looks good ....I know nothing about gardening

We don't do much. Just a few plants on the deck.

Wow,, your garden area is looking good! We never got anything cleaned up or prepped cause that time of year was when I got my boo boo's.
We will have lots to do when the thaws come..
You have a very pretty wheel barrow.
love
tweedles

I only dream of my garden these days...It's January in Chicago...it's COLD and snowy. :(

I can wait to see your garden on the next spring.

Not yet! Our harvest last summer was pretty meager. I don't have much luck with growing vegetables.

As I was reading about this, I realized that my Grandmother did this in her garden in Michigan! Glad you posted this, Lisa. Brought back memories to me with some explanation, as I was a kid, and never really grasped what she was doing. She had an amazing garden! :)

I may try dirt-bag gardening this year. Learned of it from the Missouri Extension Service. You buy a few bags of garden dirt and throw them down, unopened where you plan to have the garden. then you cut small crosses through the bag to plant your seeds or starter plants. You water through each hole you made. The plastic warms the soil, keeps weeds from getting in and growing, and retains more moisture. After the season ends, you cut open the bag and dump the dirt into the garden.

Okay. started to post a comment and just decided I am better off keeping my mouth shut on this one. But, puke? That would be easy.

We have been staying in an apartment since we got married and my friends are 2 potted plants, one has been with me for a while and the other one.. whatever I do dries up after almost an year and it is time for new :) I really would love to have a garden someday :) someday we will have a home with a garden and a dog :)

That garden corner looks great! I wish my garden looked that way. We have a large drift of snow on our garden right now. I did order seeds last week from the catalogue though.