The Monster of Walnut Grove

I've blogged before about how much we love watching old episodes of Little House on the Prairie.  For Christmas this year, Santa brought the boys Season 3.  Now we have the first three seasons.  The only problem is, we can't get past first episode on the second disk.  It's the only one my boys want to watch now.

Perhaps you remember too.  I had forgotten about the episode titled The Monster of Walnut Grove.  Until I started watching it.  Then I remembered what an impression it made on me as a kid.  In it, Laura sees Nels cut off Mrs. Oleson's head with a sword. 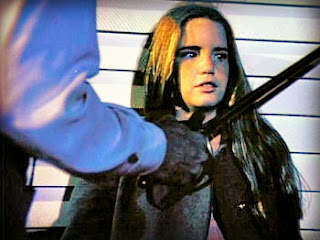 Google Image
﻿
Laura is terrified and tells a few folks, and Nellie and Willie realize she is mistaken (what she actually saw was Nels cutting the head off a mannequin), and take advantage of the situation by terrorizing Laura, in typical Nellie/Willie style.  Never fear, though. Laura gets her revenge in the end. 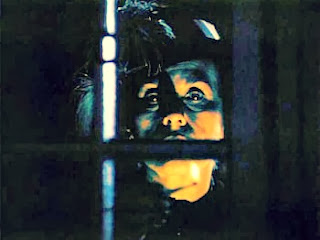 Google Image
The first time we watched, the twins were so scared they had to come sit on my lap and snuggle.  But then once they knew that none of it was real, they were delighted.  Now they want to watch nothing else.  But the snuggling is still required.  After all, it's still one creepy episode.
How about you readers?  Do you remember any deliciously scary shows that you loved as a kid?﻿

Scary shows were never my forte` although my brother occasionally made me watch them when he'd been forced to babysit me.
Remember Night Gallery? There was an episode about earwigs he made me watch...I sleep with my ears covered to this day!

Holy moose-poops...she saw her get her head cut off???...guess I am glad Imissed it! Whatever happened to Lassie?...:)JP

I loved the Laura Ingalls Wilder books and series.. what a crush I had an Albert too!

Believe it or not, the episode that terrorized me the most was when Laura gave her beloved pony to Nellie!..lol...

I used to love scarey movies of any kind, and yet they scared the bejeezus out of me and I doubt I watched any of them all the way through.

I kind of remember that one but it was so long ago. They had some funny situations in that show. I remember that they tied ropes around the outhouse when their teacher was in it. The teacher was the same guy who played boss hogg on the dukes of hazard.

I watched Ten Little Indians with my mom. It was really scary.

I watched Ten Little Indians with my mom. It was really scary.

Oh, yes mine was a Vincent Price wax museum movie-don't remember the name though!
How about Reid? Does he think he's too much the big boy to snuggle next to Mom?

I had forgotten about that, but I remember watching it as a child. Thanks for the reminder! Now the snuggling is just priceless. You are creating wonderful memories for these boys!

i remember that episode. It was scary. That's good that snuggling is still required. Some day they will think they are too old for that. Has Pierce read any of the books?

I do remember that episode!

When I was 9, my sis took me to see the movie "Wait Until Dark." It scared me to death!

Little House is a good one. I remember when are older boy was younger, he watched some old 3 Stooges and they were being chased by monsters. It took him another year or two before he would watch it again to realize that it was a comedy show.

uh oh. the love of scary movies is born...

Loved LHOTP! So neat that a new generation is watching. :) The Twilight Zone used to scare the &!@$ out of me. :/

Oh how we loved the Ingalls.

Can't think of anything scary from when I was a kid, but remember taking my little bro to a movie "house on a haunted hill". We had to leave!! :)

I remember that episode from when I was young!

There was a point a couple years ago when we were getting Little House reruns on TV, right about the time Livie would get home from kindergarten. That's when she got hooked on the series. We'd watch an episode together occasionally. She was FASCINATED (and a little scared) by this episode! But it's actually one of her favorites. LOL

She subsequently got hooked on the books thanks to Santa, who'd given her the first two.

Hmm, I can't remember a creepy show I loved as a kid, though I do love Alfred Hitchcock movies. As a kid, though, I remember reading "The Black Stallion's Ghost" and being sufficiently creeped out (and loving it at the same time).

I never saw that one, lol!!

Am LAUGHING at the whole premise of this episode!
We're addicted to Dr. Who around here...creepy but not gory.

I don't remember that one at all. Our Monkeys got the complete original Star Trek 3 seasons on DVD for Christmas, and are enjoying it. The scary thing about that? I STILL remember a LOT of the dialog from those ST episodes!

Boris Karloff used to scare me a loot.

Little House was my favorite show in the fifth and sixth grades, and i had read all the books well before the show started. It went on for years! Nellie was a little weasel for sure. And Mrs. Oleson the biggest snob. Lol

Such a great show... I certainly remember it! Not sure that any of today's shows will ever be as good as this one --and others from long ago....

I remember that episode! I used to love watching it growing up. how fun that you get to share it with your boys.

I never watched Little House on the Prairie very much growing up but I know lots of people loved it. I don't like scary stuff, so I think I'd avoid this episode haha.

Lol. That is one of the best shows. I occasionally watch re-runs.

When I was little my dad used to let me stay up on Friday night and watch the old movies live Dracula, Frankenstein,and the Wolfman. Then I would go to bed and hide under a blanket with just an air hole to breath through.

Little House On The Prairie was such a nice, family friendly show. They sure don't make them like that anymore.

I forgot all about that one! I LOVE that your kids LOVE this show….so sweet!

Moms and me watch little house on the prarie- every time its on tv..
mommy and my all time favorite.
love
tweedles

I'm not familiar with this show.

i love little house! i can watch it over and over and i know the episode you are talking about! when i was little, i'd always watch The Birds whenever it came on. It creeped me out!

Oh my goodness we just watched this one. The kids were laughing at it.

The scary show for me was Foul Play with Goldie Hawn and Chevy Chase. My Dad played it when my mom was at work. I had trouble going to sleep for weeks. My mom was so mad at him for letting me watch it.

To make matters worse he went under my bed one night, and jumped out at me. He has a twisted humor.

My hats off to the twins. I never really enjoyed creepy shows, because they usually ended up in my dreams at night. How amazing that they grasped that this was a fake scene--thankfully! ;)