A couple of months ago Cort brought home a My Little Pony dvd from the library.  It was a remake of the original version from the 80s with "Friendship is Magic" on the cover.  I didn't pay much attention when the boys were watching it.  But soon their conversations began to have the names "Twilight Sparkles" and "Princess Celestia" and "Pinkie Pie" in them.  Soon, everytime we went to the library, the boys wanted to check out My Little Pony dvds.

The librarian told me there was a documentary about adult fans who love to watch My Little Pony.  She said they call themselves Bronies.  So of course, I had to request it from the library system to see for myself.  Meanwhile, I found a bunch of My Little Ponies on clearance at Walgreen's for 75 cents a piece, and used them as a bribe to get Reid to take his antibiotics when he had his ear infection, so we began to amass a collection. 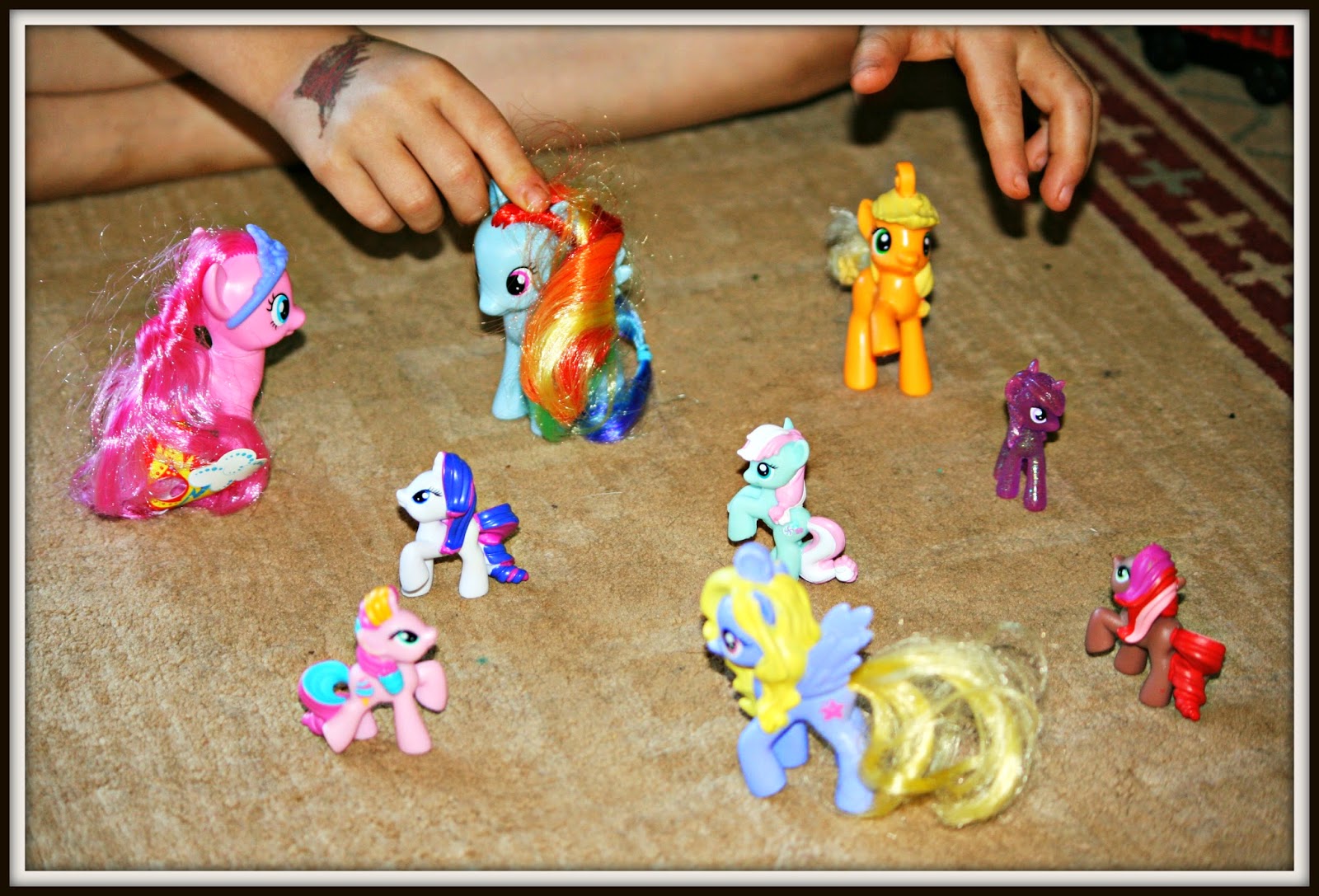 Soon, the documentary arrived, and Paul and I watched it.  The main question posed in the film is why does a show geared towards little girls appeal to adult males, and why does society have an issue with that?  The people who loved My Little Ponies, loved them because of the messages - the ponies are searching for the elements of harmony and the emphasis throughout the show is on friendship.  Plus, some of the episodes are downright funny!

One of the families they tailed in the documentary was a teenager who was scared to tell his conservative father that he loved the show.  When he finally did, the dad was less than thrilled, and didn't want his son to go to Bronycon (the conference for adult fans of My Little Pony).  My reaction to this was pretty much - hey, he seems like a good kid, and at least he's watching a wholesome show and not playing violent video games all day or out on the streets getting into trouble.  In the end, the kid did get to go to Bronycon, and his dad met other (more supportive) fathers of teen fans there, and sort of said he might watch the show once when he got home to see what it was all about.

Who knew My Little Pony had such a following?  As for the boys - when they turned 5, they requested a My Little Pony cake.  I was tired, from working the two jobs all week.  I almost went store bought this year.  But finally, I grunted it out and did my best. 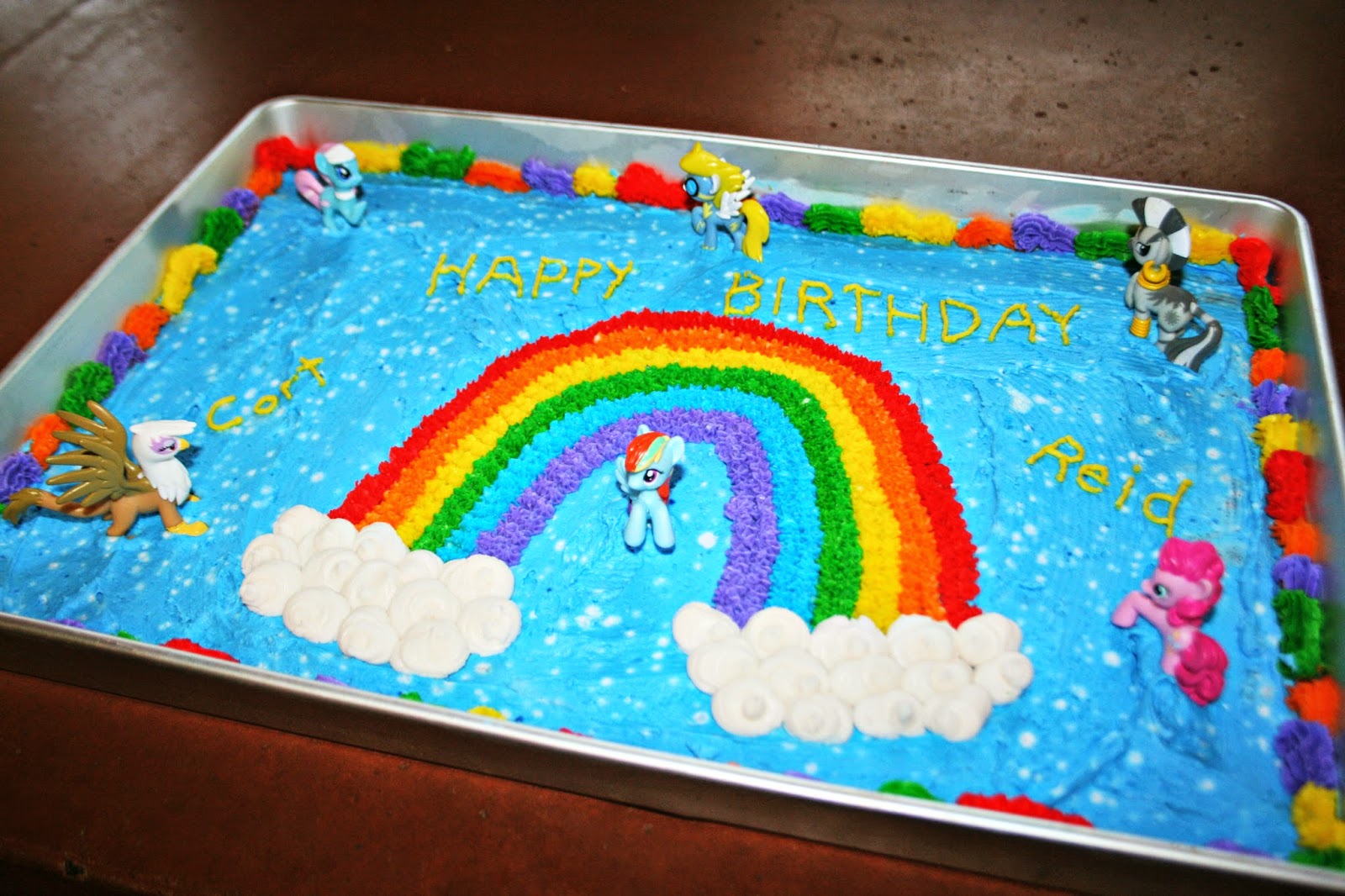 In the end, I used this Pinterest sugar cookie recipe, because I have made it before and it is HUGE (sheet cake sized) and quite yummy. 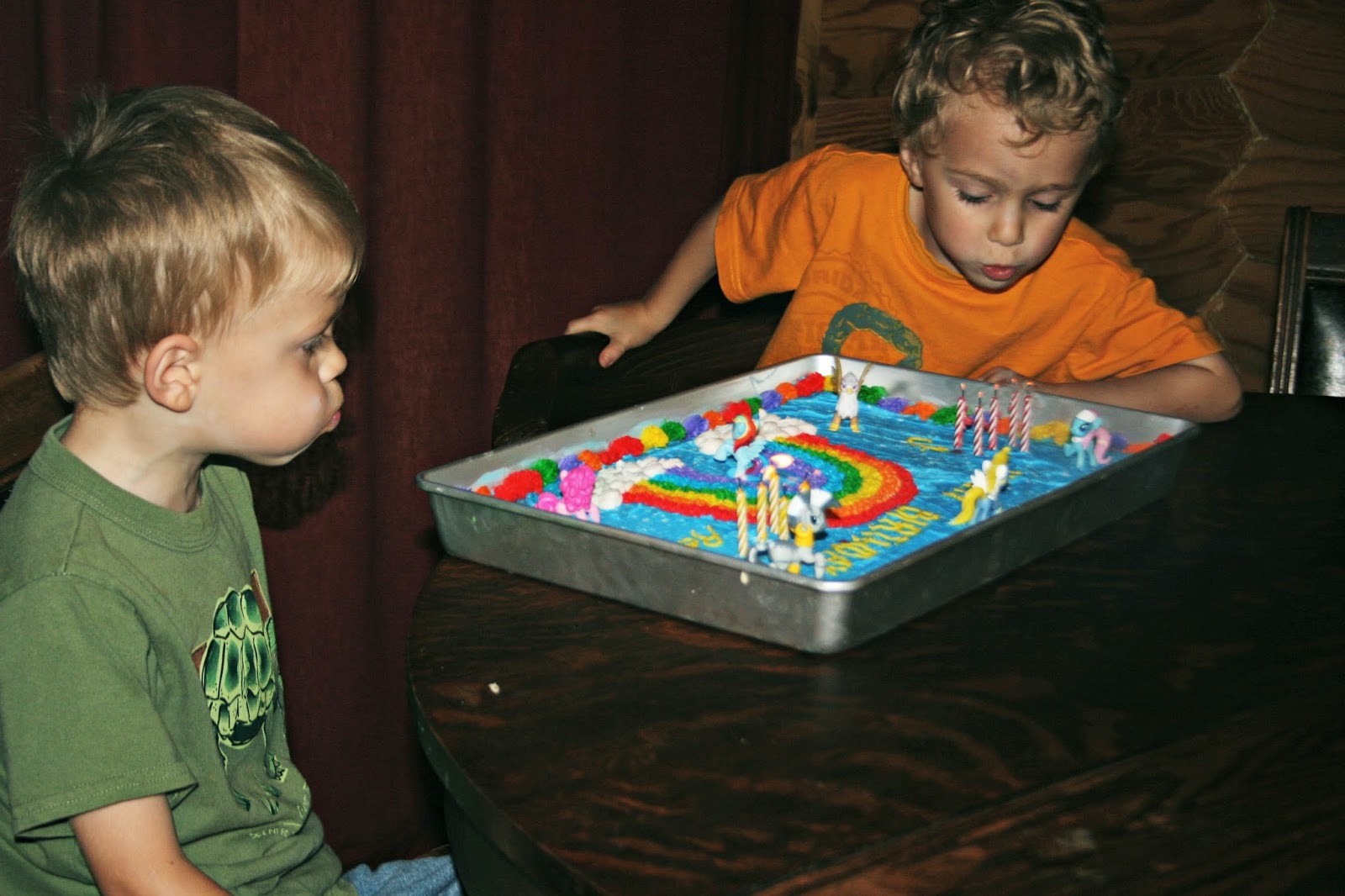 I dyed the sugar cookie pink.  And then mixed up an extra batch of buttercream to do all the rainbow and edges. 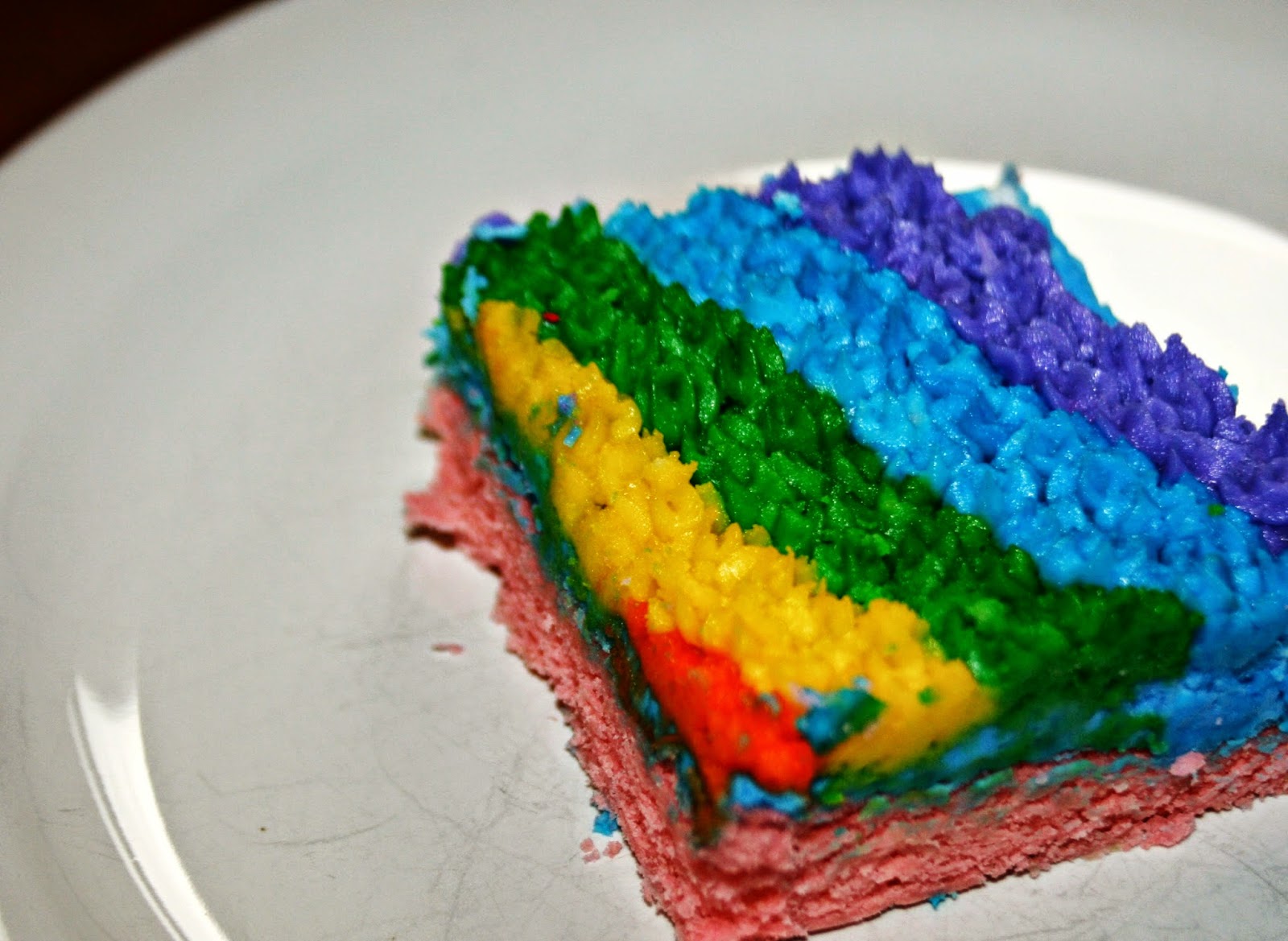 It wasn't as hard as I thought it would be.  A few figurines on top, and we were ready to roll.  Considering it only lasted a couple of days, I'd say it was a hit!  As for my boys, I suspect this is just another phase, but I'm happy they've found a show with kind messages and lots of humor to enjoy.

What do you think, readers?  Can you see the appeal of My Little Ponies?

I haven't seen "My Little Ponies" in ages. However, Lewie loves "Peppa Pig" and "Olivia" on Nick Junior. He also told me he wants to be Sandy Cheeks the Squirrel from "Sponge Bob" for Halloween. I'll take this any day over him wanting to be an evil villain. In my book, any show that delivers a good message, like "My Little Ponies," gets an A+ from me.

It is refreshing to know that there is hope for those kids like yours that see the importance of the messages. There cookie cake came out awesome!!!! ...:)JP

I did not realize John Delanci, the voice of discord, helped with the documentary. He's one of my favorite actors from, of course, Star Trek.

Pretty funny. My kids loved them and we often went to garage sales to find the figurines. I have quite a few and have got my grandkids started with them.

I see the appeal. :) I like that you disregard gender stereotypes and let them watch whatever they want to... My son was watching Lalaloopsy the other day and I told him to scoot over so I could watch too. :)

I agree 100% in young people watching the decent, good message stories rather than out on the street, burning something down, or shooting someone. You are a wise parent.

You did a great job on the cake/cookie - it's adorable and even though this is probably a phase the boys are going through, they'll always remember Mom doing this for them.

Anything with animals and themes about harmony sounds good to me! And good for you and Paul for not getting caught up in gender stereotypes. I have seen the My Little Pony figurines, but I've never seen any of the movies. A that cake turned out fabulously!

First of all the cookie cake is adorable! This was so interesting to read. I had no idea that adults were into My Little Pony, boys too and that they actually had clubs and Bronycon. My daughter was born just when the pony's came on the market so I really know nothing about them. I think I'm gong to have to watch it!

Welcome back to my old friends!! Ella has been in love with them for years! In fact, we were out shopping with her once and Family dollar had several on sale. I let her choose one and bought it for her. Afterwards I was warned by her mother do NOT buy her any more! They use them as bribes to get her to do things! I totally agree with you I think more boys should play with them. Your cake is awesome, I truly mean it! It looks better than any bought cake would have.

I've posted about this--the two guys in the cubes behind me talk about the Ponies all the time. Of course, they have kids who watch it, but they like them too. I actually bought one of them Brony pajama pants. They have them in the men's department at Target. Go look for them.

From what I am gathering, I think some of the bronies are not into the ponies as innocently as we might think. It's a fetish for some....so...uh...there's the reality to why there are haters.

My daughter loved My Little Pony! Your cake is the "Bomb!"

Happy Labor Day... Hope you are having a great day. We finally got some rain here this weekend (which we needed)--but this week promises to be a hot one... I'm SO ready for Fall...

Wonder what is it in our society which 'tells' men that they can't enjoy shows about friendship and love--or even something which is geared for kids???? It's like the expression that "Men don't CRY".... Good Gosh--why not. The most macho man I know (My hubby) loves watching chick flicks with me ---and he can watch something sweet and sentemental and get teary... Gosh---I'm happy that people love "My Little Ponies".... That's NEAT.

I've never seen it but am all for something that's G rated and teaches good lessons!

I am familiar with the show, mostly from my students. Neither my son, nor daughter, was a fan. However, I don't see the problem with it. My son went through a phase and had Barbie dolls. Thought my husband might faint, but whatever! lol

Ponies are fun! And you are a great mom!

That's so funny, and great that they like that. My nephews got into Care Bear. I love the cake!

I have a few students every year that like My Little Pony. At first I thought it was odd. Now I think it's just funny. I had a big hairy guy student that carried a My Little Pony purse last year. He would draw the characters for the girls in the class. :)

My daughter collected little ponies when she was a child, and there are still a bunch of them in a special foot locker in the barn. In the 1980's Little Ponies were definitely for girls only. Like dolls.

I guess times have changed.


you are really a good webmaster. The website loading speed is amazing. It seems that youre doing any unique trick. Also, The contents are masterwork. youve done a magnificent job on this topic!
Cardsharing Server

I would like one of those ponys too!
love
tweedles

I admit. Lisa, I've never heard of it or seen it. But I'm so behind the curve. I got a kick out of "A few figurines on top, and we were ready to roll". I am glad you took pictures. These boys will have plenty to laugh about...much later! :)