Did a Bear Attack My Horse?

Last week I had just finished my run, and was looking forward to taking Francie for a ride.  As I was jogging up the driveway to the house to change into my riding clothes, I happened to glance over at Phoenix in the pasture.  I was shocked to see the inner part of both back legs and his tail completely saturated in glistening blood.  Every inch of fur was coated.  I ran and got a halter and led him down to the cross ties, where we have a water hook up.  I immediately thought he'd been attacked by coyotes or wild dogs, or maybe even a bear (the neighbors have reported several black bear sightings this summer).

I started hosing him off, and couldn't find any injury.  The bleeding seemed to have slowed, but where had it come from?  Thankfully, it certainly wasn't a bear, or even wild dogs.  I finally realized there was only one tiny little spot - tucked way up under his back legs.  How on earth did he get injured there?

The vet made it out a few hours later, and the bleeding had slowed significantly by then.  Phoenix was awesome - he was so gentle that he didn't have to be sedated.  The vet was able to numb the area and scrub it, then he put in several staples.  It turned out that the injury, small as it was, had nicked an artery - hence all the crazy bleeding.  The vet said in all his years, he had never seen an injury up in that area.  We wondered if he had backed into a stake-sharp stick in the pasture somewhere?  There doesn't seem to be any other suitable explanation.

Phoenix was current on his tetanus, so all he needed was a long acting antibiotic shot and he was good to go.  In a couple of weeks, I'll remove his staples, if they haven't fallen out.  I was relieved it wasn't more serious. 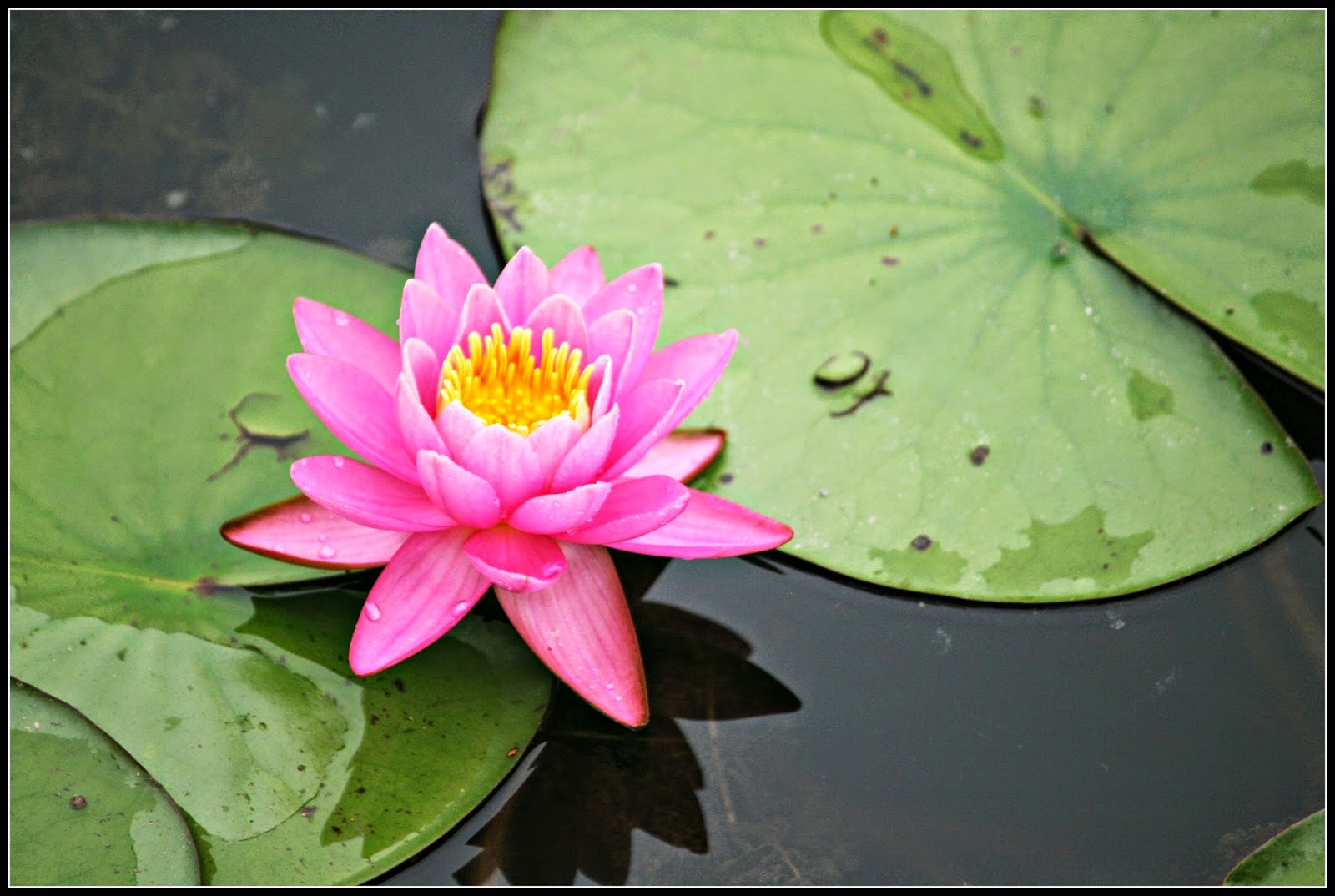 Photo taken at the NC Zoo last month.
Speaking of horses, I highly recommend the documentary Wild Horses, Wild Ride.  It is about 100 people who take 100 wild mustangs and have 100 days to train them.  Then they all go compete in Fort Worth.  Afterwards, there is a public auction, and the mustangs all get adopted into new homes.  It was an amazing film - I couldn't believe the things some of the people could do with those horses in just 100 days!  I checked it out of the library system, but I know many of you have Netflicks, and they probably have it as well.

I hope your horse get better soon. And the water lily is so beautiful!

I have seen Dusty bend over a sapling and scratch himself all underneath, maybe something like that happened. He does it with what ever he can find, not to bright of move but so far he hasn't been hurt.

Wow! Glad Phoenix will be ok. Scary! Ask your vet if Celox or Quik Clot is safe on horses. It should be, but check first. Then get some qc gauze and celox powder, just in case.

At first it sounded terrible about all the bleeding, but so glad it turned out like it did. Have a nice weekend.

Pretty scary to see this. Hope it heals good.

So glad it wasn't worse, but it was still scary enough!

That must have been horrible seeing all that blood. So thankful it was not worse. Thanks for sharing about the film. I love your water lily photo. Hope you and the boys enjoy the weekend.

Poor Phoenix; I would have lost my marbles with worry. So glad he is well.

Horses sometimes get cuts and scrapes in the strangest places and on what? That kind if stuff--not blood gushers though--happens around here sometimes too. How's Francie doing under saddle? I will definitely check out your documentary recommendation.

Oh my goodness! How SCARY! I'm glad the horse was okay.

I have an idea, what about a snake that slithered upwards and then bit him? This is such an intriguing mystery! But I guess we will never know. Hmmm, maybe a spy cam in the pasture, it should only cost a thousand or so. I am so glad he is alright now. Beautiful water lily!

Poor Phoenix! I hope he feels better soon. That must have been so scary. That sounds like a great documentary. I wanted a horse so badly as a girl, and I still love them.

I am so glad you caught it and that he is going to be okay - you must have been so scared. Hope there are no bears!

That was certainly scary. I'm glad he is doing okay and it wasn't more serious.

I'm very glad it wasn't a bear, and that your horse was not seriously injured.

My daughter is active in the movement to prevent the ongoing slaughter of Western mustangs. Currently the federal government contracts out their "disposal" to people who kill them for dog food.

Oh goodness, poor Phoenix. I know that must have frightened you so badly. :(

Glad it wasn't worse though.

You and the boys keep your eyes open for bears, Baby Girl. I know you know what to do, as do the boys, but be aware. There was one that went through our yard a few times when we lived there then would head up the mountain on James' side of the road. That goodness Phoenix wasn't mauled! Once again, you did great!...:)JP

Poor Phoenix! Glad he is on the mend.

I'm so glad it was nothing more serious!

I feel bad for your horsey!
love
tweedles

Aww! I bet your heart dropped seeing the blood. Thank goodness you saw it and the vet got him all fixed up. I'm glad it was nothing major!!

I hope there are no more injuries. Sounds like it was a scary situation. Beautiful water lily!

Glad it wasn't serious! Once Opie cut his chest open, big hole!...from a fence post. Surprisingly, the vet cleaned it out and determined he would not stitch it. Better to let that wound drain and heal from the inside out. You can imagine THAT fun.. keeping it clean constantly and flies out of it. There isn't evena scar now, but I could have put a fist in there, that's how big the hole was. I saw parts of that mustang story, and I have to admit because they have time restraints and they really want their horses TRAINED for the end result, some of their training seemed harsh. But I am a wuss in that department, admittedly.

So glad it wasn't a bear! You're a good mommy all around!

That sounded serious. Glad you took quick action! Hope he heals very quickly. I have heard of that movie, and have seen a special on it with film footage. It's been a while. Sounds like you have a lot going on!

The pore horse. That sounds awful. I'm glad the bleeding started to ease up.

Wow, I'm glad Phoenix is okay. What a scare! Thanks for the tip about the documentary; it sounds really interesting!

Oh, my goodness! I was just wondering how Phoenix was doing and happened to come upon this post. Glad he's okay.