Do Elephants Get Sore Throats?

I had a run of illnesses last month that would've knocked me down for a few days, only I'm a mom, and I didn't have time to be knocked down.  Because if I don't pack lunches and do laundry and vacuum and go to work....well....it doesn't get done.

I hadn't been sick in ages, but in September I had to go to Urgent Care three times.  I've basically sworn off the whole PCP thing for illness.  Mostly because I have to get an appointment, then even with the appointment, I end up waiting for well over an hour to be seen.  Seems it's much easier to just show up at an Urgent Care, where I've had good success in being in and out within 30 minutes.  And I can go on weekends.  Plus, the cost is the same as for my PCP.

I had strep throat.  Then 3 days later a raging ear infection, even though I was on antibiotics.  Then a week after that, inflammation (related to the first two illnesses) in my vocal cords which made it feel as though I was being strangled.  Two antibiotics, a lidocaine mouthwash, and some steroids later, I finally started feeling better, albeit exhausted.  It took a good 4 weeks before the scratchy throat finally started to alleviate. 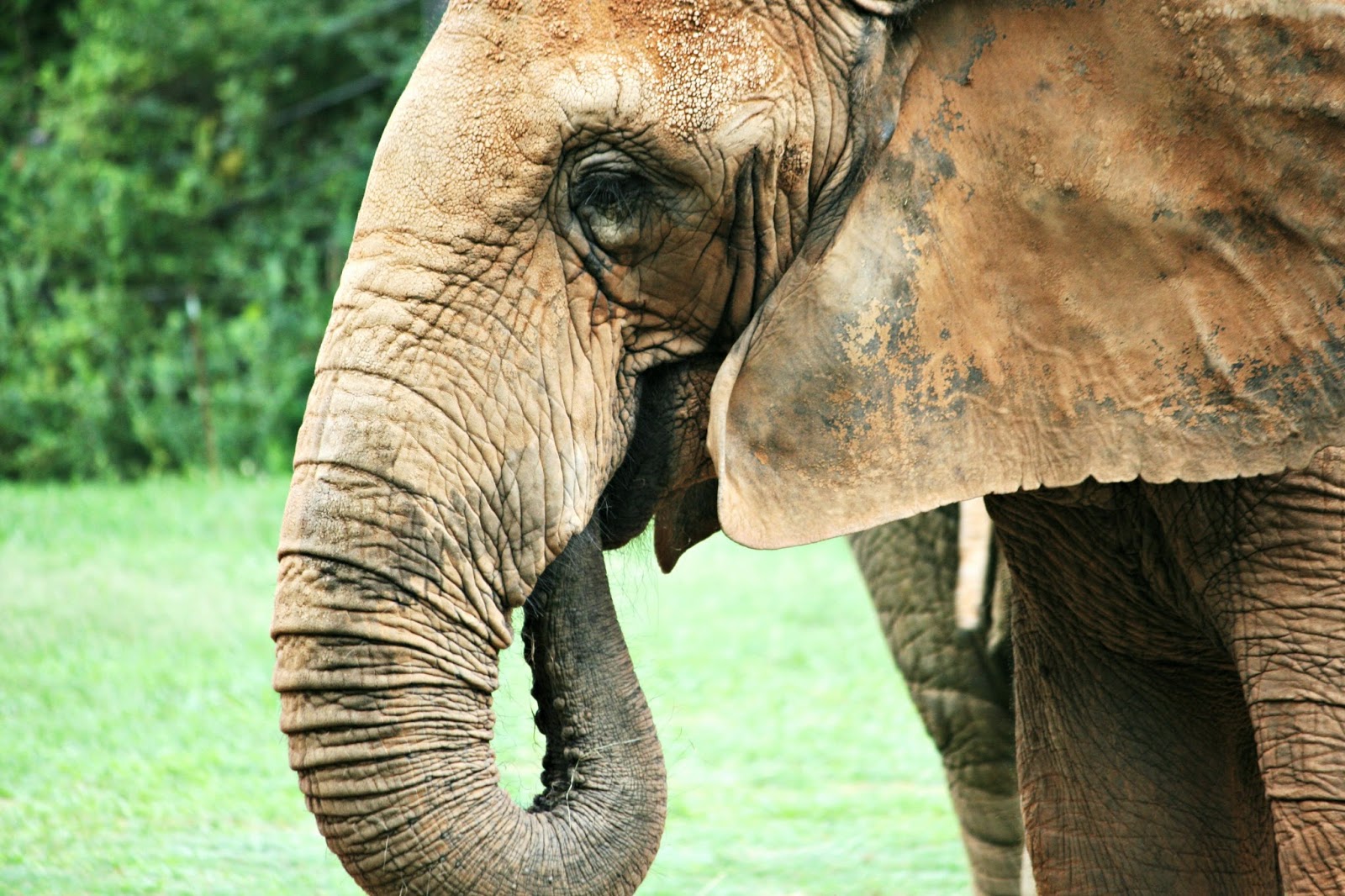 Picture taken at the NC Zoo in August.
﻿
﻿
I wonder if elephant mothers get sore throats?  If so, I can't imagine they would crawl off into bed and refuse to tend to their calves.  You gotta like that about elephant mothers.  They are devoted to their young.  I have to say, though, that if they do get sore throats, I feel extra bad for them.  Because you know eating hay and straw has got to be killer swallowing!

Hoping you, readers, have been well so far this Fall.

Sore throats? What if they got a sinus infection!!!!! Your resistance must have been down, Baby Girl...did the boys get strep?...:)JP

If they had to live in cool damp areas like we have to do and then get pollen dumped on them, not to mention if they were over populated like humans, then they might have some problems.

Oooh that all sounds nasty. Take care of yourself Lisa and hope you get better soon.

Hope you are back on your feet, I hate being sick

oh, you've had a run of it. maybe you've gotten all illnesses done with until next year. :)

I feel for you. A few years ago Isaak and I got sick, really sick. We were each throwing up, had zero energy. Then our throats started to hurt and felt weird. Strep it was. I never knew it could start with the stomach flu. Mica's teacher at the time had it to. In her family it started out the same way. It must of been the strain for that year.

You are right, mom's have to keep things going.

I tend to get sick because of being a teacher, and having a lot of allergies. My immune system isn't the best.

Bless your heart. Sorry that you have been sick. Glad you have a good Urgent Care to go to.. We have a clinic near her which is good.

Did the kids get sick during that time? Hope not. BUT--Moms do get sick even though they 'can't'... ha

Hugs,
Betsy
PS---Have no idea about elephants---but it made me laugh thinking about them having a sore throat.... ha

The kids could be carriers from school and not have it themselves. Gosh I just got over over one myself - felt like cut glass every time I swallowed.

Glad you're on the upswing!

so far, so good, knock on wood! hope you got all that out of your system!

Oh no! And how on earth did you get an infection while on antibiotics? And what about your jobs? Well, maybe you have had your sicknesses all at the same time and now you will be well for the winter, and Christmas!

yep, its true mom's are human too...lol Was blesed last year to see a newly born baby elephant in the wild, abolutely amazing, was worth the hours on the dusty hot roads searching for the herd. Nice catching up on everyones blogs after so long.

You poor thing! I hope you stay healthy the rest of the year!

Yikes. Talk about a bad month. Glad you all better...:)

My goodness, you did have a bad run of it! I hope that's all that you'll get sick for a long time.

That's amazing that you can get in and out of Urgent Care so quickly. Is it at a hospital? My PCP's practices have some "open" offices where you can show up without an appointment, but the wait is lonnnnngggggg.

I think you do too much running in inclement weather. Even the Marines switch physical training to indoors when it's raining and cold! >:-(

You're a darn good mom though. The Elephant moms would accept you in the herd. ;-)

Strep! Glad you are treating it!
I've noticed a lot of people with lingering throat issues lately. My middle son has had a sore throat for 2 weeks now. It comes and goes. Ick.

Were glad your better,... and we think Urgent Care is a good idea.
Why not..!
I don't know about the elephants,, but I never had a sore throat.
love
tweedles

What a gorgeous Elephant, so sorry you've been ill, I had strept once and did crawl under covers until the swallowing of knife blades stopped, but then I didn't have any 'calves' to tend, Moms are super people I'm convinced, glad you've started to feel better.

I'm glad to hear that you're feeling better. Being sick is terrible, but being sick three times with little ones is just plain torture. Take care of yourself!

Oh Lisa the dilemma of every good Mom. I do hope you are feeling better now. Take care. Hug B

I'm so very sorry, Lisa. Goodness gracious, it's difficult enough being sick but as you say, you have to keep going! So glad you're doing better now though. Yes, praise the Lord we're not elephants with that hay/throat but I do admire them for taking care of their young. It's not that way with all animals; heck it's not that way with some humans.

Things to do in Los Angeles said...

Sorry to hear you were so sick. Glad your better and yes being a mom doesn't give you any breaks when your sick!
((HUGS))

I’ve found it a double-edged sword. In truth, when you absolutely have to take care of them you grind it out and do it. It seems like it drags you down but I’m of the opposite opinion: it makes you stronger.

Sounds like you were really sick! I'm recovering from a cold but it wasn't that bad.

That sounds painful and harsh, but I'm impressed that you threw a lot at it to get better, Lisa!

Sorry to hear you have been ill. Two of my grands had strep, but fortunately, they got meds pretty quick and seem to be over it. I've been extra diligent about washing hands lately since the grands are back in school. That seems to be the worst time of year for catching bugs and viruses.