The other day I was at the library, and they had a bunch of old magazines for sell for 10 cents each.  I got a nice stack going for myself and a couple of other family members.  I found a kid's magazine I'd never heard of before called Jack and Jill.  I added that to the pile for Pierce, after flipping through quickly and seeing some fun mazes and puzzles.

That evening I was working with the twins on their dolch words for kindergarten, and I told Pierce he should read that magazine to keep him busy.  Pierce is the typical oldest child - very responsible and independent.  He did what I asked for a bit and all the sudden shut the magazine and announced, "Mom, I'm not reading that magazine anymore!  There's a boy showing his private parts!"

I felt alarm and guilt and shock.  How could I have brought home such a magazine?  What were they showing kids these days in magazines?  I asked Pierce to show me the picture.  And this advertisement is what he turned to: 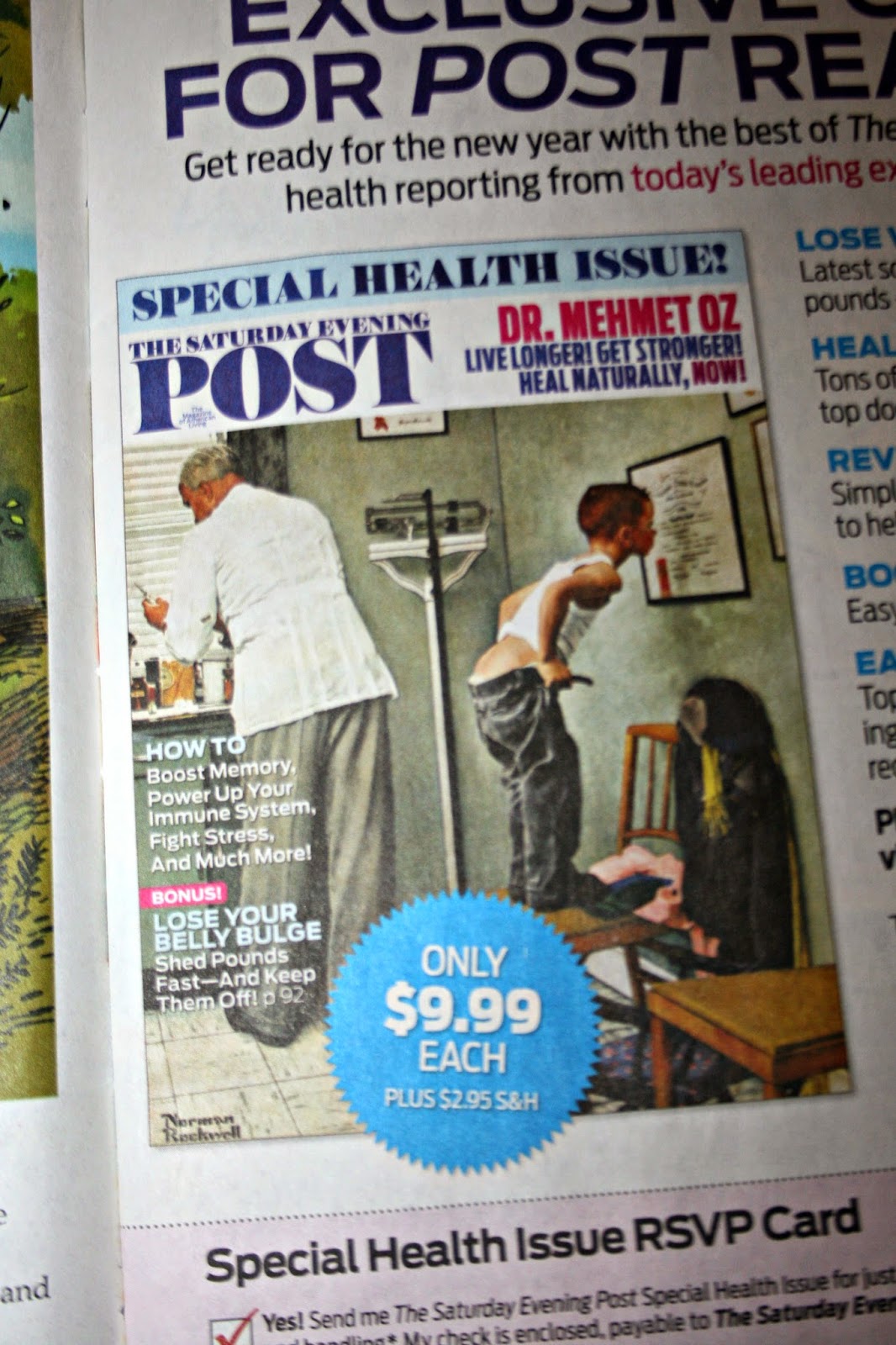 I had to chuckle.  I could see why Pierce may have gotten that impression.  He has never received a vaccine in the bottom.  He has always gotten his shots in the fatty part of the thigh.  So I explained what the picture really was.  I don't think Pierce found it very amusing.  I guess I won't bring him anymore magazines for a while!

Readers, do you have a favorite Norman Rockwell painting?

I wonder about how Pierce's next Dr's appt will go! A fav Rockwell for me is the tree in town square.

Jack and Jill was a very popular childs magazine year ago.

I do love Norman Rockwell

We had a huge book of my moms of Norman that always was in the reading rack.Saturday Evening Post was a treat to get and look at what he had new to share.

Bless his heart although I was laughing out loud. :)

I used to have some prints matted and framed with no idea where they are now.

Oh how things have changed at the doctor's office! Your son's reaction is precious as well as funny. As for my favorite Rockwell? The school teacher! What else? Hugs, Linda@Wetcreek Blog

Now that's funny! Kids get the message, but then have trouble distinguishing "it's OK" from "it's NOT OK." And I adore all of Norman Rockwell's paintings. It would be hard to pick a favorite one for me.

Ha! What a misunderstanding!

lol my son gets upset if he hears someone say things that he thinks are bad words (like 'dumb' or 'shut up.'). hahaha Makes me laugh every time. ;)

Pierce pays attention and has strong opinions. For our little kids, the bottom is the WORST and most private part of ALL! It is the most secret of all private parts. Not so much with the other. Isn't that funny, why do you think it is?

I laughed so at this, but I also thought, poor Pierce. And poor YOU for thinking you brought home something terrible.

You gave me such a laugh, Lisa! As far as a favorite, there's the parents standing at the bed of their son who is sleeping, and the father has a folded newspaper announcing America at War. Then there's the Thanksgiving painting and the church choir one. I'm not sure I have a favorite, as they are all terrific!

If it is on a magazine cover it isn't private any longer.

My favourite Rockwell? I'm torn between his portrait of JFK, and the painting titled 'The Problem We All Live With'

That is hilarious! There must never be a dull moment at your house!!

OH, HA! I adore Rockwell's paintings---I wish I could claim a favorite, but I like so many--the girl getting ready for prom, the baseball player, Ruby Bridges escorted to school. That man had a range.

That was an "interesting" response to Rockwell! But, as you said, Pierce's life experience didn't help him with that.

That's funny! But I recall not liking that photo as a child. I'd heard about getting shots on your bottom and I thought it was a terrible custom! Ouch!

That right there is funny!

That's funny! I like all of Norman Rockwell's work really. Some of his portraits where he's working in the painting are pretty cool. I love that extra long stick he used to attached his brush to. Artists really don't use those now a days.

My son would have thought it was funny.