When I was a kid, my great great aunt had a room in the basement called the fruit room.  It held canning goods, but as a kid it seemed like a secret room to me.  We weren't allowed to play there, but it was full of jars.  A collection of apothecary jars, that had come from the general store of a distant relative that had closed in the 1950s.  The general store had a pharmacy section, complete with a wide array of apothecary jars.

At one point, my dad was allowed to pick two apothecary jars to keep.  He selected one with a powdery mint green substance, and another with a sugary substance.  I was with him when he chose them, and I remember my awe at the array of jars.  For the rest of my childhood, those two jars sat on our mantle.  Every time I looked at them, I remembered the collection, and wished I could see it again. 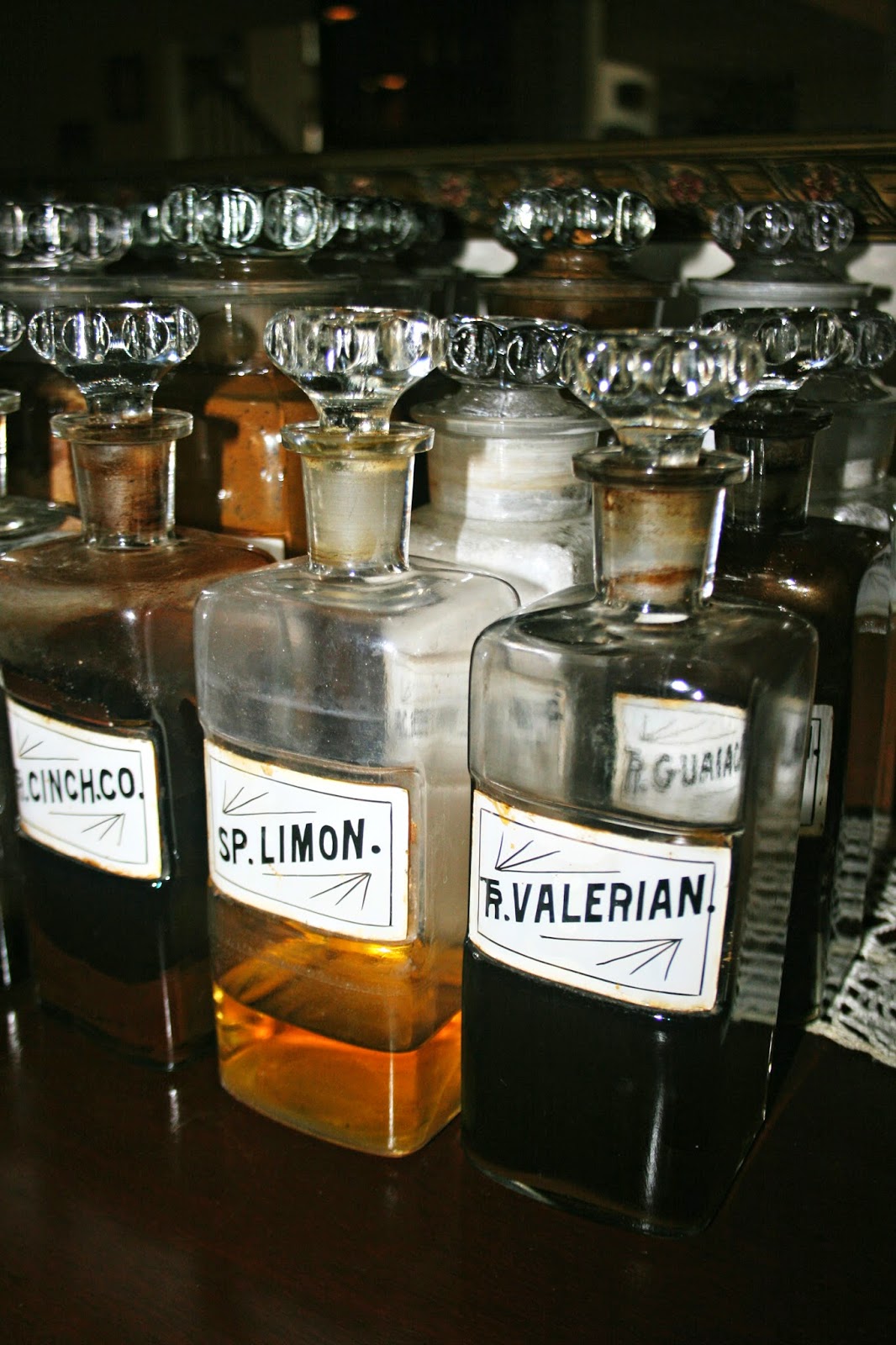 Now, in the present, the rest of the jars have come to my parents' house.  Full of tinctures and potions, I still adore them. 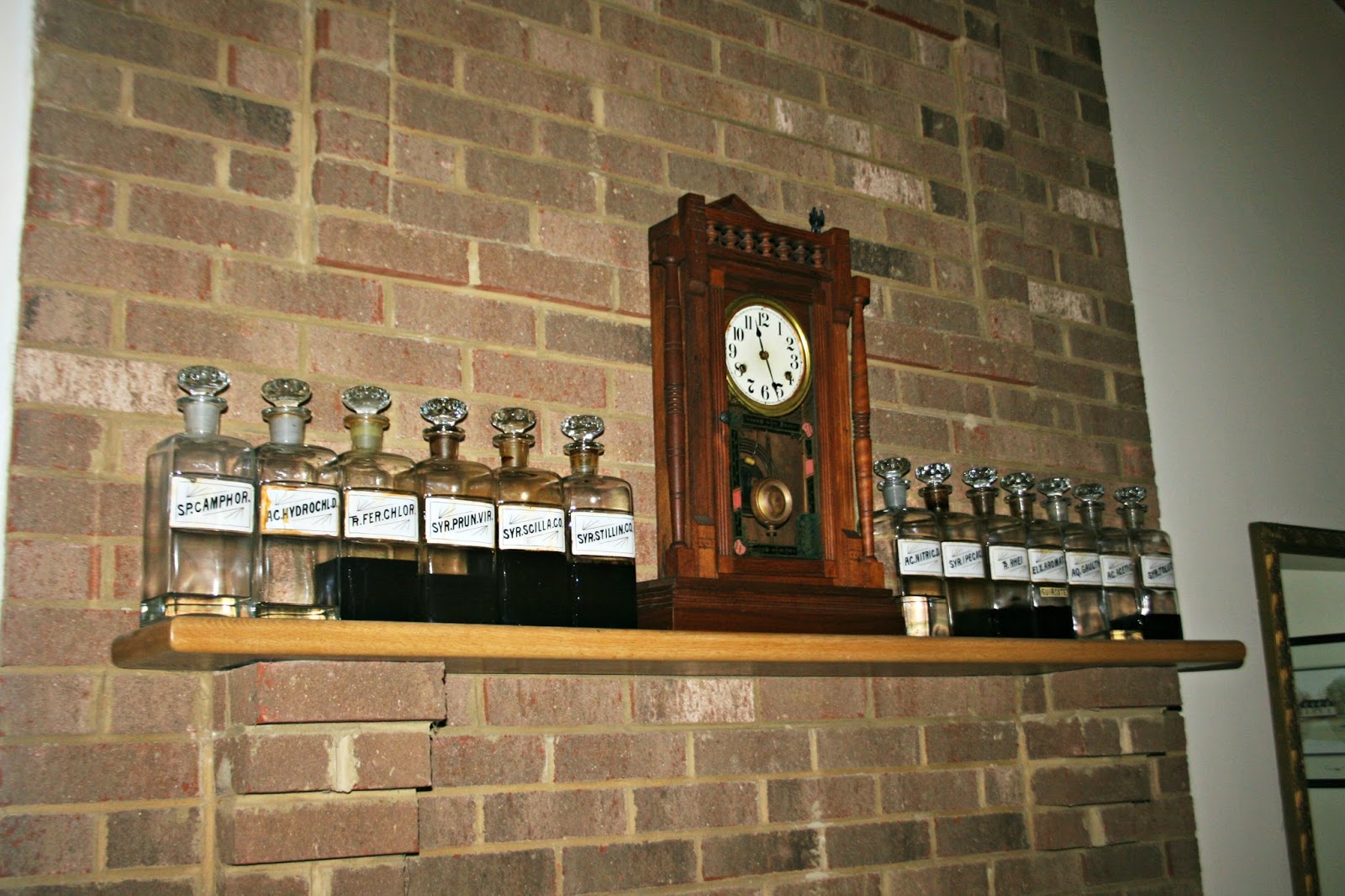 I stood at the collection for quite some time, inspecting and curious.  Wondering what each one was used for, back in the day.  My mom remembered actually using some of them as a kid.  Some of them had fused lids, but some were easily opened.  I started sniffing them.  Some smelled awful.  Others smelled alright.  One was distinctively cinnamon, and another camphor.  One made me cough.  After a while, some of the smells made me a little light-headed, and my brother John came in to the room and warned, "Be careful - If you smell certain ones, they will make you woozy".  Good advice, I thought, as John wavered slightly in my vision.  Of course John took the chloroform - although if he sniffed it he's not fessing up.  Honestly, I don't recommend smelling chemical substances from the 19th century - my curiosity just got the best of me. 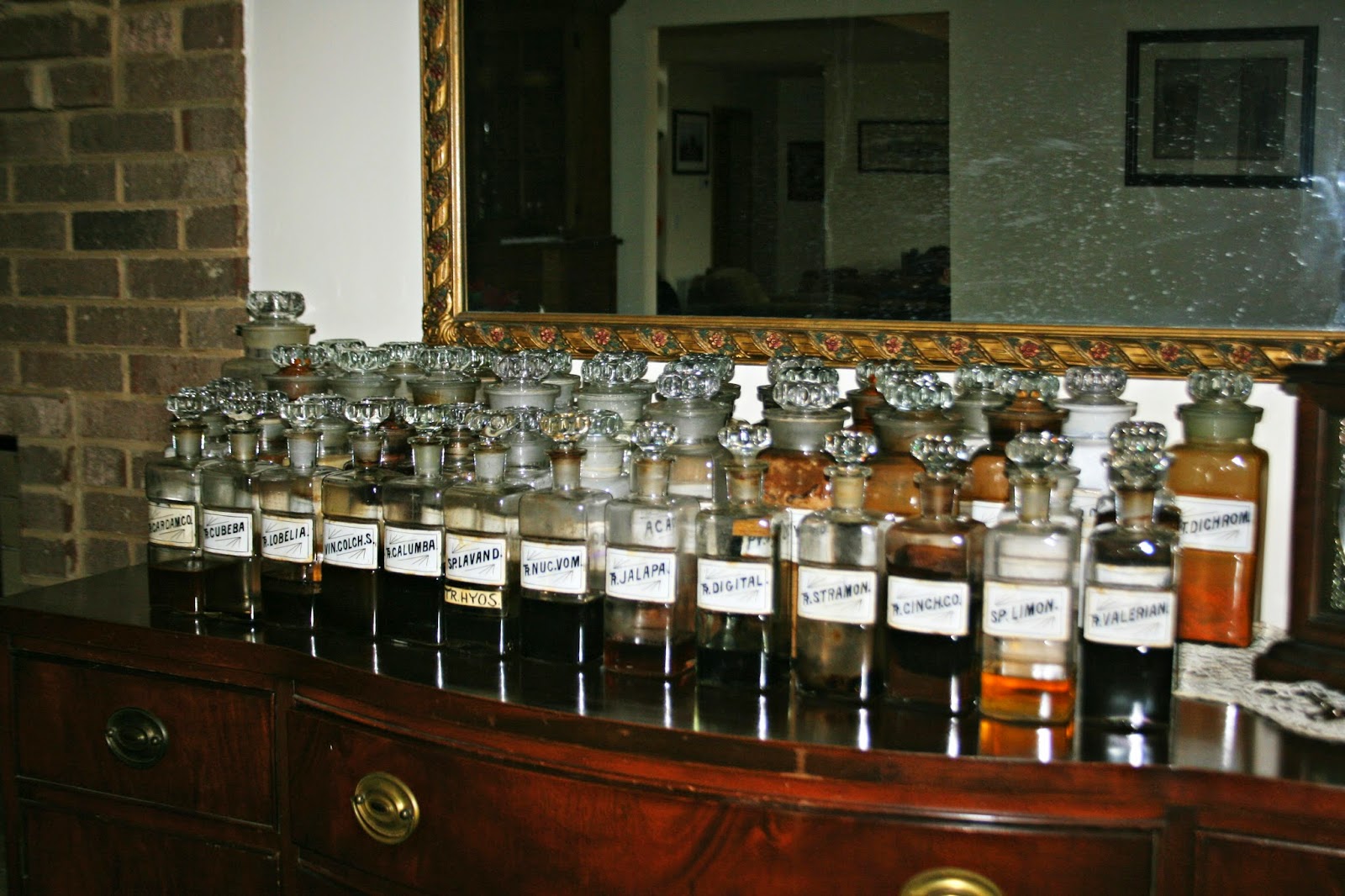 My parents told my brothers and I would could pick some to take.  It was a difficult decision.  I chose 16.  I know what a few of them were used for, but others I still need to google.  They are displayed on my kitchen cabinets. 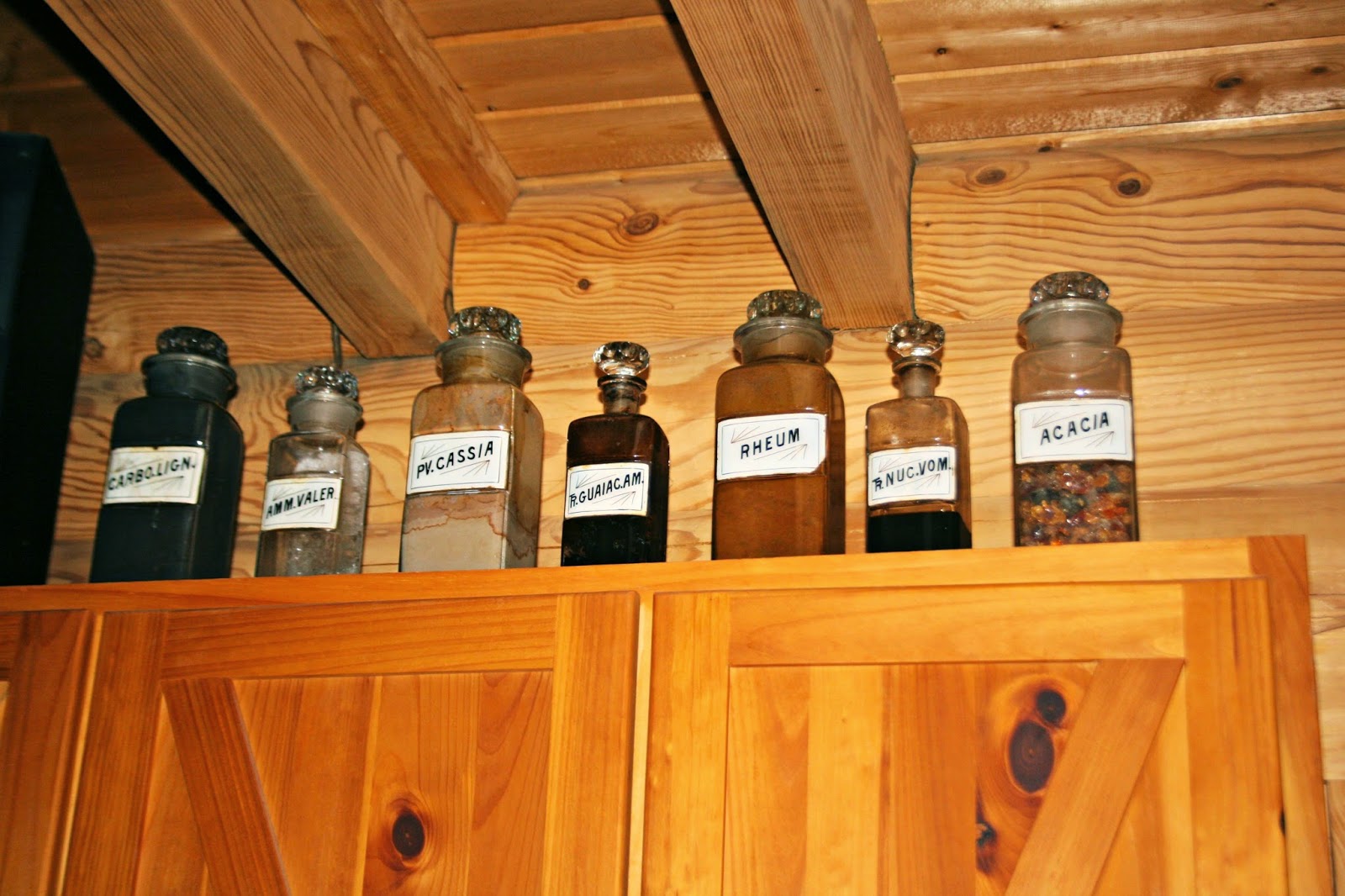 A small part of me feels a little bad about splitting up the collection, which has been in tact for over 100 years.  But it is nice that my two brothers and I and my parents all get to enjoy a piece of them every day in our homes. 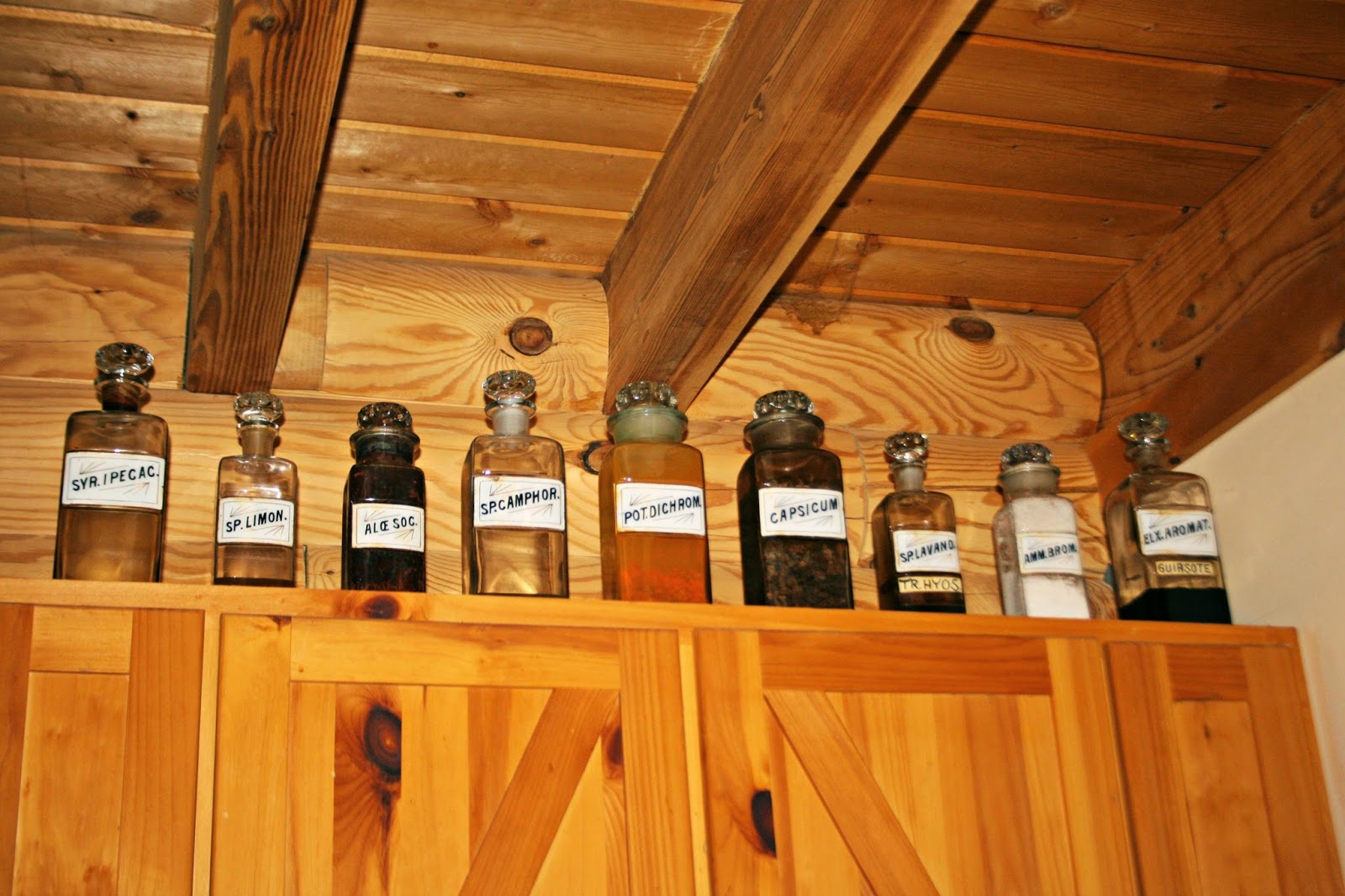 It's like having one of the most magical moments of childhood bottled up on my cabinets.  They make me smile each time I see them.
Readers, do you fondly remember any mysteries from your childhood?  ﻿

Pretty cool all the ingredients they used to use.

First, to answer your question . . YES! I do remember mysteries saved in my heart from long ago . . some saved for generations like yours . .

More important to me is YOUR marvelous post. How terrific to have enough of the history to keep your family on a quest . . surely one of you will want to delve into the treasure you have . . and, who knows? one f your little guys may grow up to write a script that gives the story such fascinating color, it grows national interest and informs us a bit more of our collective past . . I'm kinda excited about your memory, and acquisition . . Thank you for sharing . .your life is full of treasure . . . .

how cool. i know your boys know they shall NEVER touch them. EVER!

Oh Lisa this is incredible the stories the memories oh I am excited and I never even get to smell one:) It is wonderful that you all are keeping them it does not matter if they are all togther this is fantastic. Hug B

Those are cool. What a fun "adventure" you took us on as you revisited these bottles.

I can't remember any specific mystery from childhood. However, I remember how neat and organized my grandfather kept both his desk/home office, and garage. I was fascinated. Everything was meticulous, the garage, too. It was like you could've prepared a meal in there. If he asked me to go get something from the garage (a spare light bulb, some twine, a pair of work gloves, etc), he could be anywhere in the house and he could tell me EXACTLY where that item would be out there in the garage. I thought it was so cool.

These make a very nice decoration, and are really authentic. since you took 16, and the others took some, it makes me think there were a whole lot! How many were there? So are the boys showing lots of interest in it like you did growing up?

Those are such nice jars a real treasure!

I love having things from the past. The bottles are interesting for sure, and good decoration too.

We think their pretty!
love
tweedles

I love old things like that. They seem like a link not only with family but with simpler and happier times. I'm glad you got some of them.

I love that you got to bring some of the bottles home. And I'm glad they make you smile. :)

Looks like you have stored the "poisons" way up high. Nice to have something with a personal history to look at.

That is very COOL!!

Those are so neat!!!

That's wonderful that something that fascinated you as a child is now sitting in your home. And wow, the fact that some of these substances are still in the bottles is amazing to me!

My great-aunt Ida had a collection of blue and green glass bottles that she displayed in the windows of an enclosed porch. I loved looking at them.

Look so unique! The square bottle looks so compact!

How cool! I'd want to smell them all too, but there sure is no telling what kind of chemicals are in those bottles! Very neat, Lisa- I'm glad you got to bring some of the collection home to enjoy looking at.

How beautiful they are! What a lovely treasure.

One of your best posts ever, Lisa! Very heartfelt. I feel the same about items on display from my parents here too. Your apothecary jars are a sacred gift and memory in good hands!

Wow...that is really unique! I remember being amazed at my great-grandparents' garden, but it did not have the "mystery" or the allure as the apothecary collection that you grew up with... It sounds like Googling some of the names would be something cool to do with your boys...

Those are cool jars!

I have an old mask in my kitchen that was originally meant to hold string. People used them before twisty ties were around.

I use a lot of those herbs you have now. Some of them taste nasty too.