A few weeks ago our house got hit hard with that dreadful stomach virus that has been making the rounds.  Pierce had some special activities going on at school that he'd really been looking forward to attending.  I have to give him credit for positive outlook.  He kept going around the house (as his brothers hovered by the toilet) saying, "I'm not going to get it.  I know I'm not".  Famous last words.

I found him hiding in his bed.  He didn't want us to know he was sick.  He wanted to go to school that badly.

Needless to say, he had to stay home.  But he cheered up when I pulled out the pyramid that he received from Santa Clause. 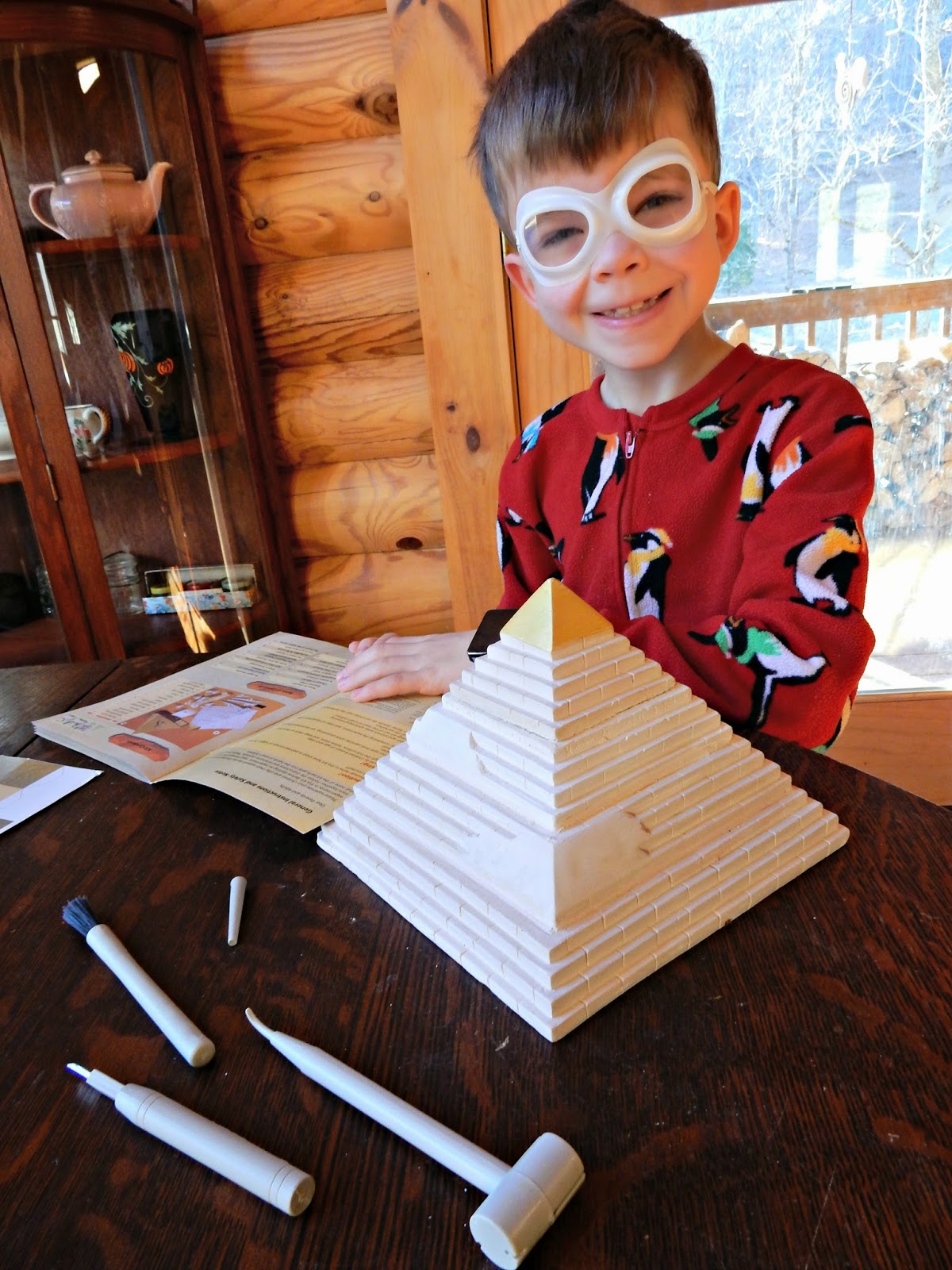 I read to him about Egyptian culture and archaeology while Pierce got set up.  His first step was to crack the top and find the secret slide to remove it. 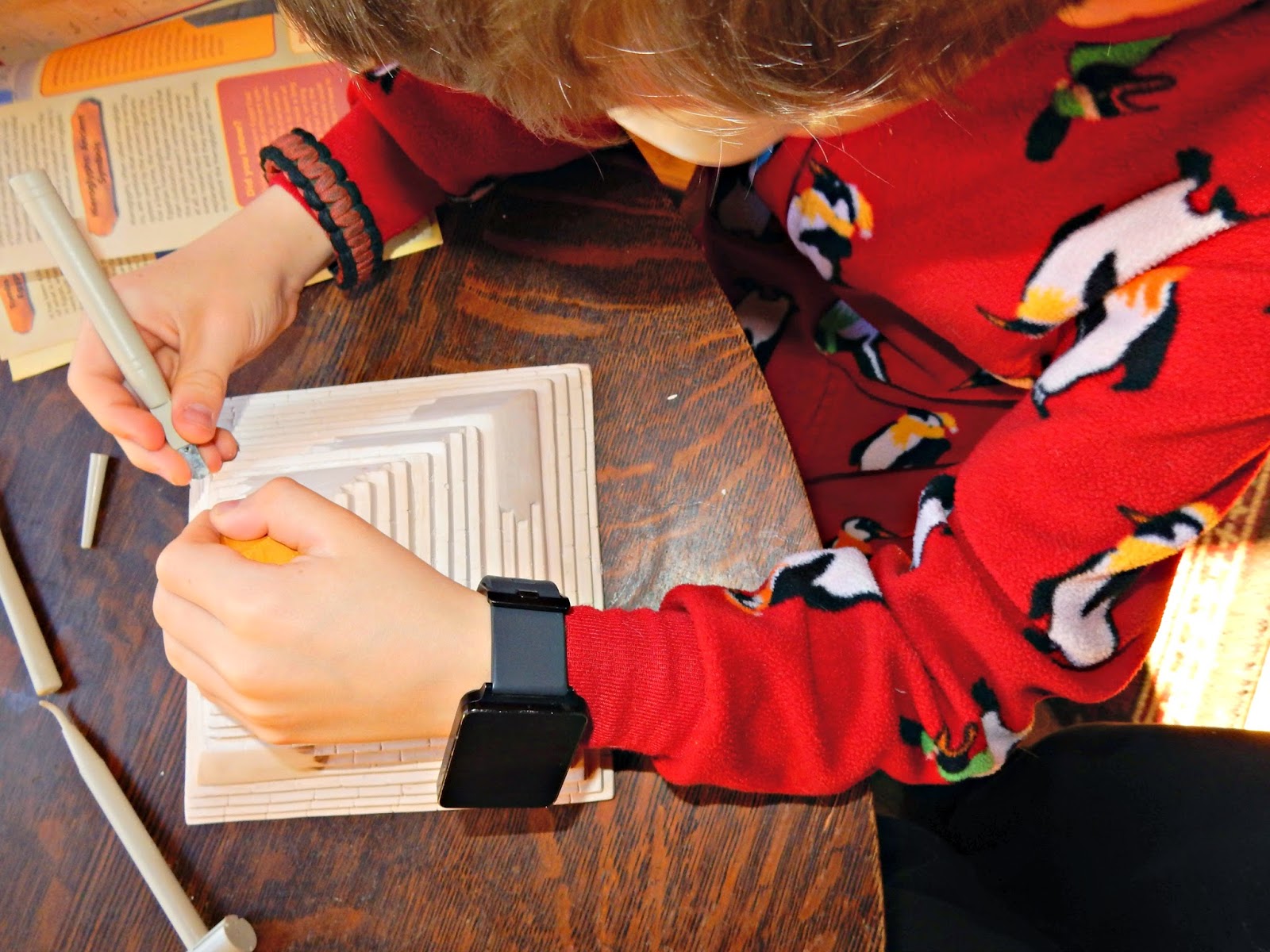 Once the top was off, he discovered the pyramid was full of sand.  Luckily, he was armed with special tools to carefully remove the sand. 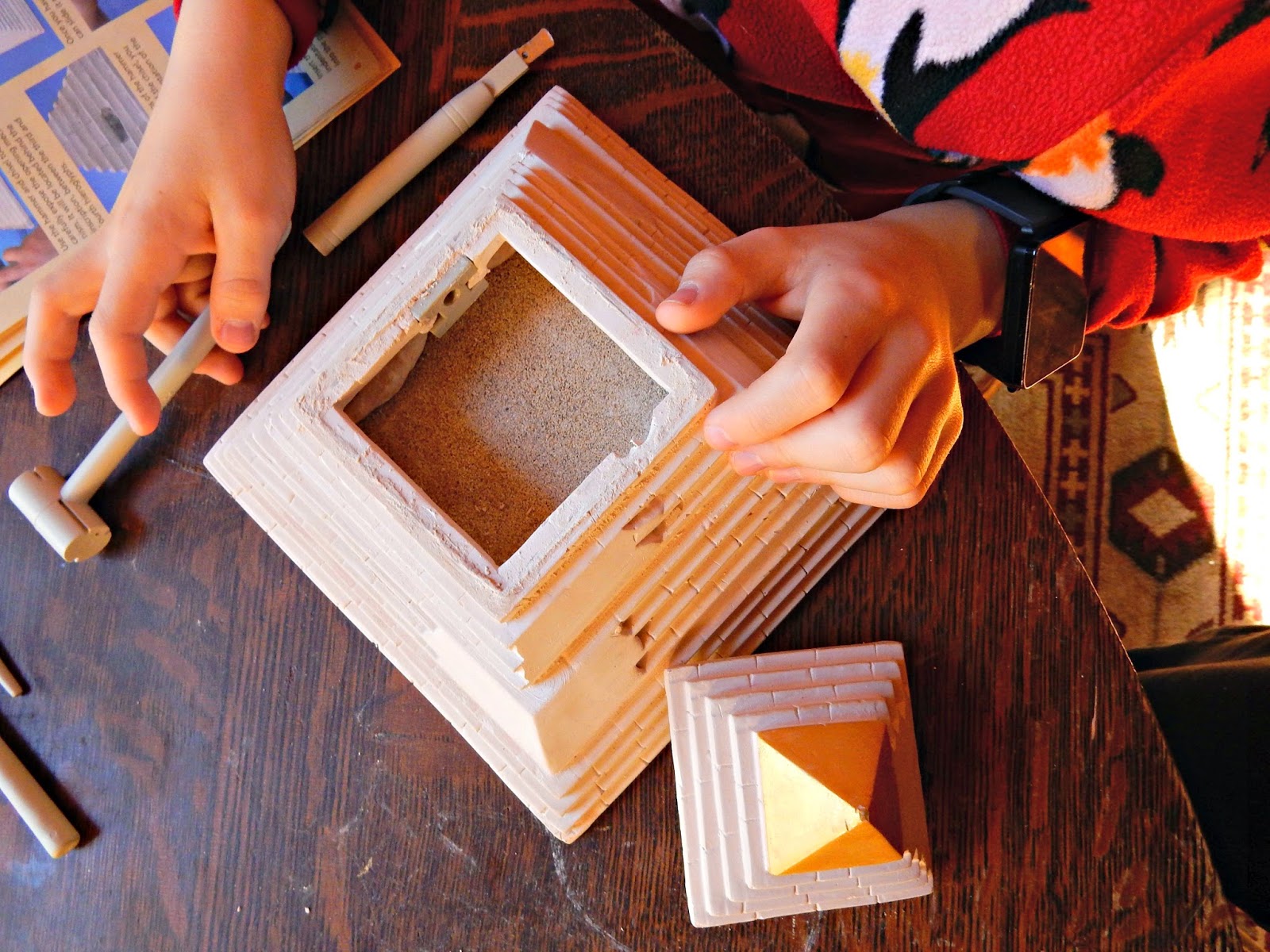 And, he found a sarcophagus!  Pierce got very excited over this.  He kept saying how cool it was. 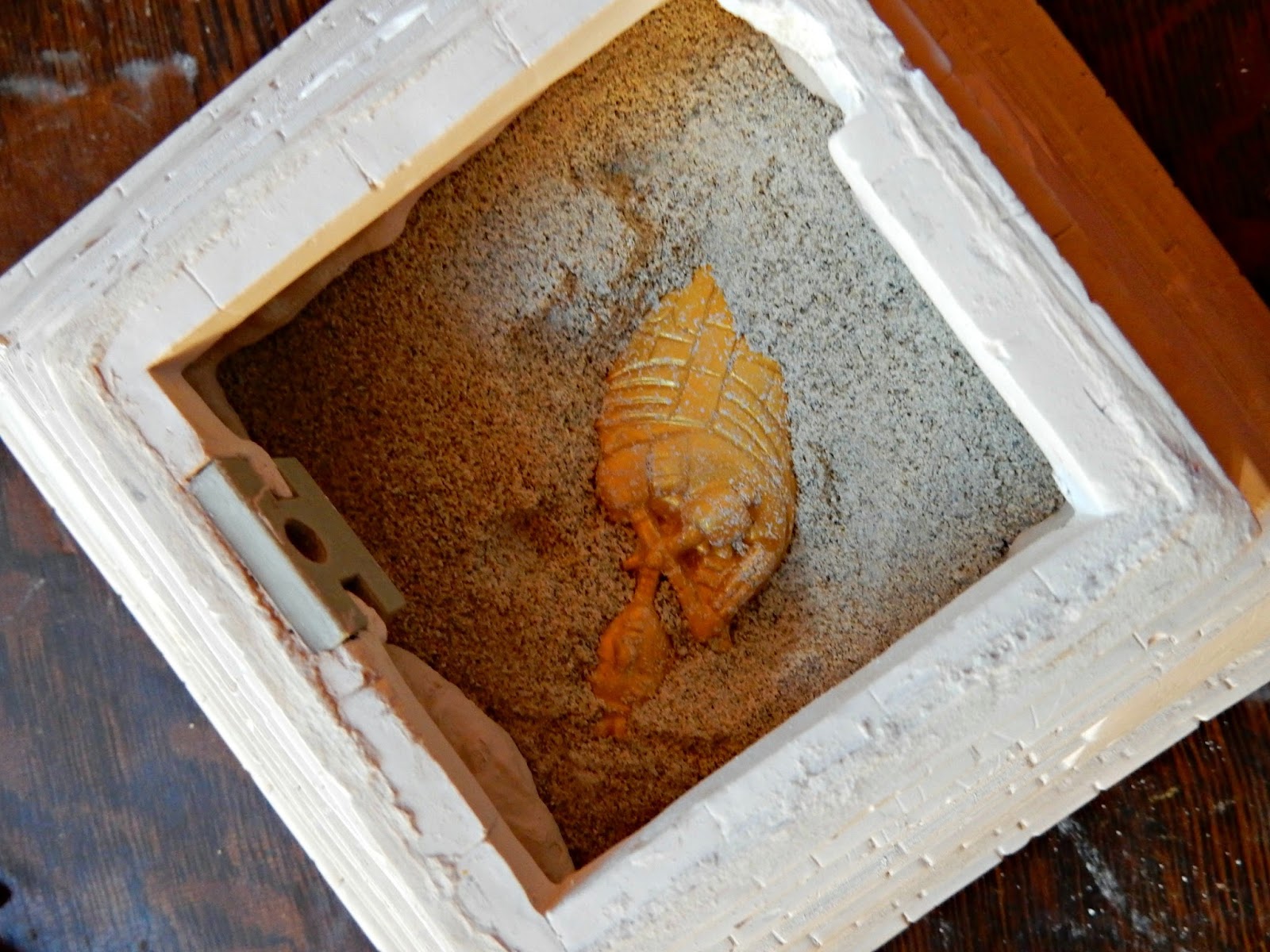 Bit by bit, he removed a mummy, a death mask, the sarcophagus, and 4 animal urns (which were used to store the organs before mummification. 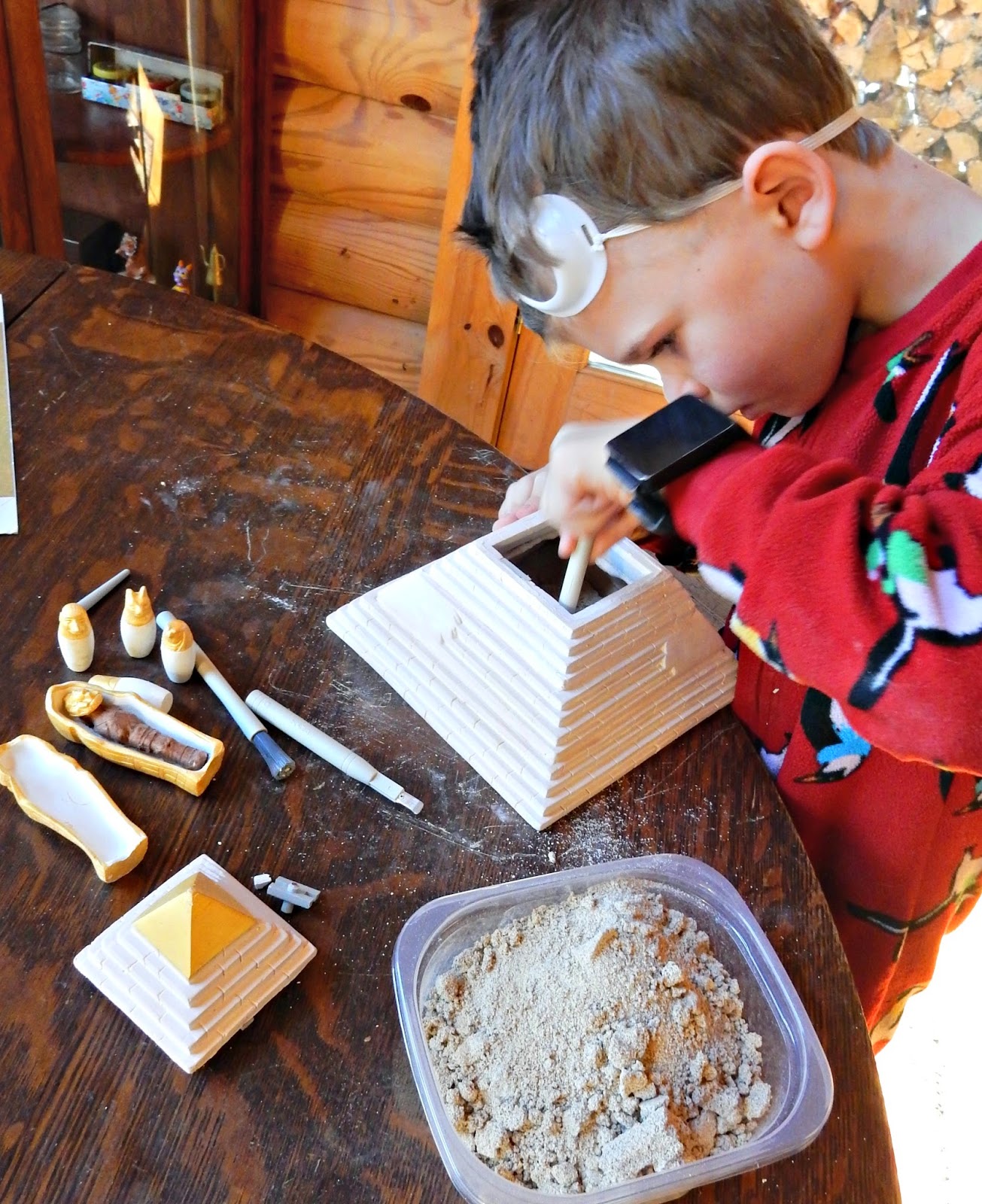 What a fun way to spend a sick day!  Luckily, Pierce was able to return to school the next day, and he still got to do the activity he'd been so upset over missing.

Readers, does it seem like sickness always comes at the most inconvenient times?  Or is it just me?

What an awesome little kit! My boys would love this. I've bought a few dinosaur excavating and they always love it, but they would like this way more. Hope everyone is better, those viruses are the worst, and yes they do happen at the worse times ever!

Awwww.... He didn't want to miss school. Well, you saved the day!

Well yes I have experience with sickness coming at a "I don't want to miss something" time. What a cool gift I can imagine Pierce taking his time and savouring every bit of this dig. Hug B

a good way to keep him entertained and glad he got better in time to have fun at school, too!

What a great way for him to stay busy, entertained and forget about feeling bad! Always sad when the kids are sick. It's good he wasn't sick too long.

What a cool pyramid! He got a little taste of being an archeologist there.

Yes, once, right before a capital murder trial I needed to cover, I got bronchitis. I cough a lot when I get sick because of asthma. I went to the doc in a box on the Sunday before the trial started on Monday. I told the doc he had to do something because I couldn't be coughing. He gave me a shot of prednisone and some nondrowsy med and I did fine. :-)

I love it! Glad he was able to go back the next day.

This pyramid is totally cool! It is a bit like the excavating kit I got for Anne which I will post about. That was a big hunk of hard matrix and you dig out the gems. Yours is a step better! I imagine it totally made him forget he was even sick! This bug is everywhere here, too. So far, we are the only ones who haven't gotten it. I am so glad they are all better and it didn't last for long.

Sounds like he would enjoy taking an archeology field school some day.

Haha! I enjoyed the goggles he used at the beginning of the excavation! Fun! And glad he was able to get well and return to school. A nice story! Getting sick is never convenient. :)

What a great gift and an even greater mom to make being sick not so yucky! And I had forgotten that you guys live in a log house. Super photos. Linda@Wetcreek Blog

What a great distraction! I hope by now everyone is feeling 100% healthy!!!

My mom used to keep a rainy day shelf to amuse us when times were rough.

Very awesome kit. He seems so inquisitive it's awesome you guys nurture that.

What a terrific mom you are!!!

As an enthusiast of ancient history,, I very much like that pyramid kit. I'm sure your son enjoyed working with it and was pleasantly distracted.

Sickness is always inconvenient! It was great that you found a fun activity.

Awww...I'm glad he was able to enjoy at least part of his sick day doing something fun! I would've loved that pyramid when I was a kid.

Yes sickness seems to come at the wrong time. What a fun job!

so sorry to hear about the virus. that pyramid looks so cool!

What a super cool kit! Is Pierce naturally interested in archaeology? (I'm just wondering if my six year old would enjoy something like this...) What a fun sick day! (And, oh yes, illness always happens at the worst of times in this little house. I agree!)

You're right, sickness always comes at the worst possible time.

Bless Pierce's heart for wanting to go to school so badly, and bless YOUR heart for being a brilliant Momma!

That pyramid is VERY cool! What fun for him!!

Yes, sickness always comes at an inconvenient time --or it seems to --since there is no good time to be sick!!!!! Same for injury.... I hated having that horrible knee pain during CHRISTMAS.... Oh Well--tis life.

That pyramid was a fantastic gift and perfect for Pierce on a disappointing day when he couldn't go to school... Great educational gift also!!!
Hugs,
Betsy

That is really cool! We had a few of those kits. One was digging out dinosaur bones and another was digging for gems. The kids LOVED them!

Ohhhh no! This happens every time. My kids have been so sick this year. Glad it was a quick virus!

That's so cool! Makes me excited to homeschool with my little one!!! <3 - www.domesticgeekgirl.com

Wow, that's such an awesome pyramid... am sure Pierce had fun at home and no more sad that he didn't go to school :)

What a great activity and he looks so cute in his goggles.

This is really cool! What a fun activity!

What a great activity! And I'm glad he got to do that activity at school he so badly wanted to do!

It's not just you, it def. does. And that was a cool way to spend a sick day.

What a wonderful and inquisitive mind he has, Baby Girl!...:)JP

You are a jewel of a mother and he is one little prince.
This is also a really neat gift from Santa.