The flyer came home in January in the boys' folders.  Lacrosse.  I knew nothing about lacrosse.  Paul knew nothing about lacrosse.  The boys knew nothing about lacrosse.  But Reid said he wanted to play.  So began the process of finding a bunch of second hand gear - there is padding for every part of the body.  Plus a helmet.  And cleats.  And a mouthguard and protective cup.  I asked a guy in Play it Again Sports how the game is played.  He said, "Basically you put on a bunch of padding and beat on each other."  I thought, "Hmmm.  Reid isn't going to like that".  We are very much a family that emphasizes personal space.  My boys don't wrestle.  They don't play rough. They have never seen a football game on television.  And if you've been reading my blog for a very long time, you might remember the big soccer flop we had several summers ago.

Lacrosse kids are brutes!  Even when they are just supposed to be listening to the coach, they are constantly pounding on each other with their sticks and elbows and hips.  It's a different world, but they all seem to be having so much fun.  They don't want to quit playing - they beg for more, and they yell in enthusiasm over every game. Even though Reid is the smallest on the team, he endures these pokes and prods from older teammates without complaint.  The practices are long - two hours - and although Reid seems exhausted towards the end, he keeps going out there and trying.

Reid is not at the point of shoving back in all this hardcore playfulness.  But at his first practice he did manage to knock another kid's ball out when playing sharks and minnows.  The other kid laid down and cried.  Reid looked at me in horror.  I gave him a thumbs up, and he looked so surprised.  I'm sure he was expecting me to tell him to go tell the kid he was sorry and give him his ball back.  But this is lacrosse.  No apologies for stolen balls! 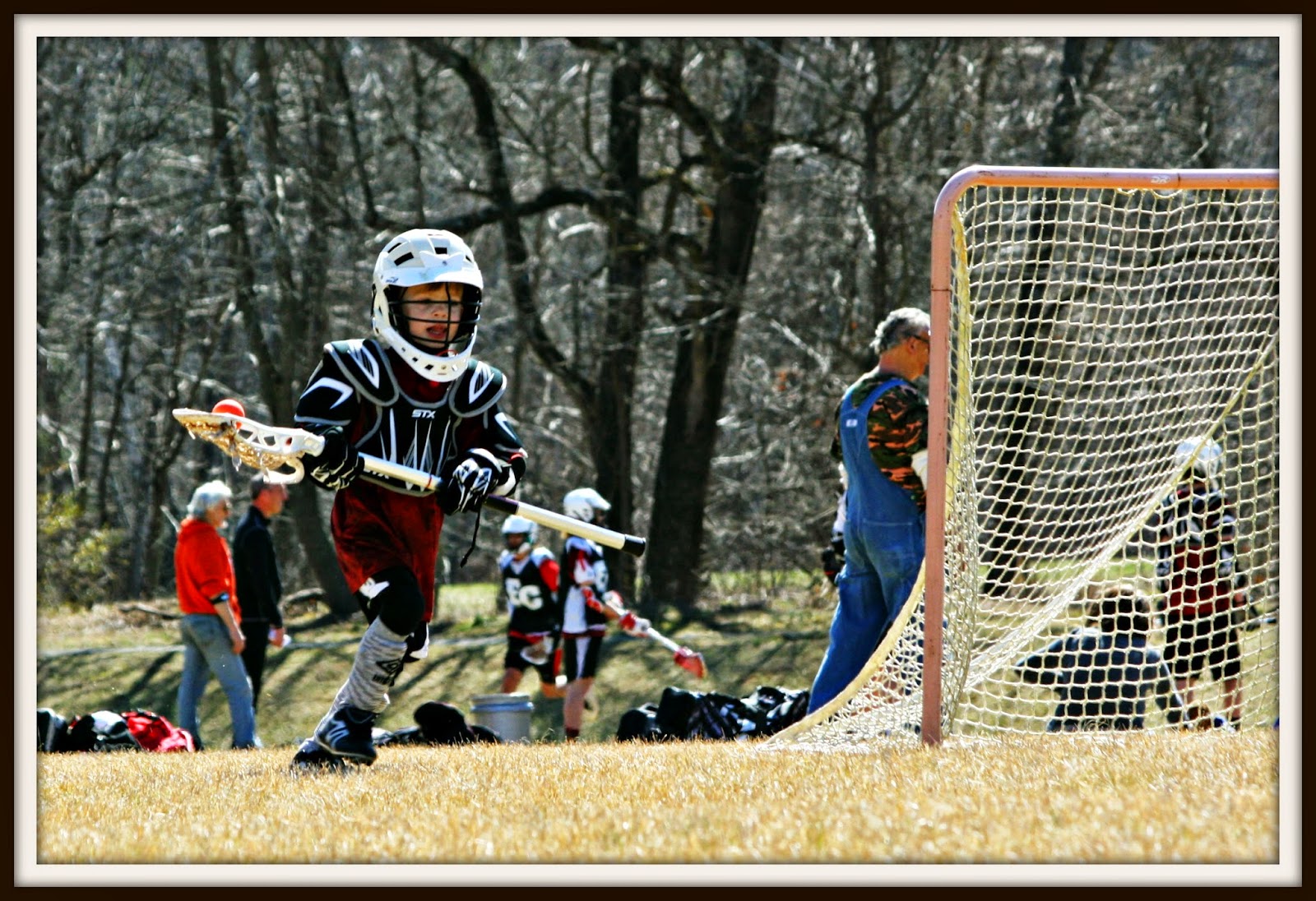 It's very different for me.  I never did team sports.  I rode horses.  I did cross country one year in high school, but that's still a solo sort of performance.  I have to say, though, lacrosse seems more interesting to watch than soccer or basketball.  And I know how to say "Great job" or "I'm so proud of you!"  In the long run I think that's all I really need to be a good lacrosse mom.  After all, it seems to be working when I'm dance mom for Cort (because I know nothing about dance either, although I am learning a bit as I go). 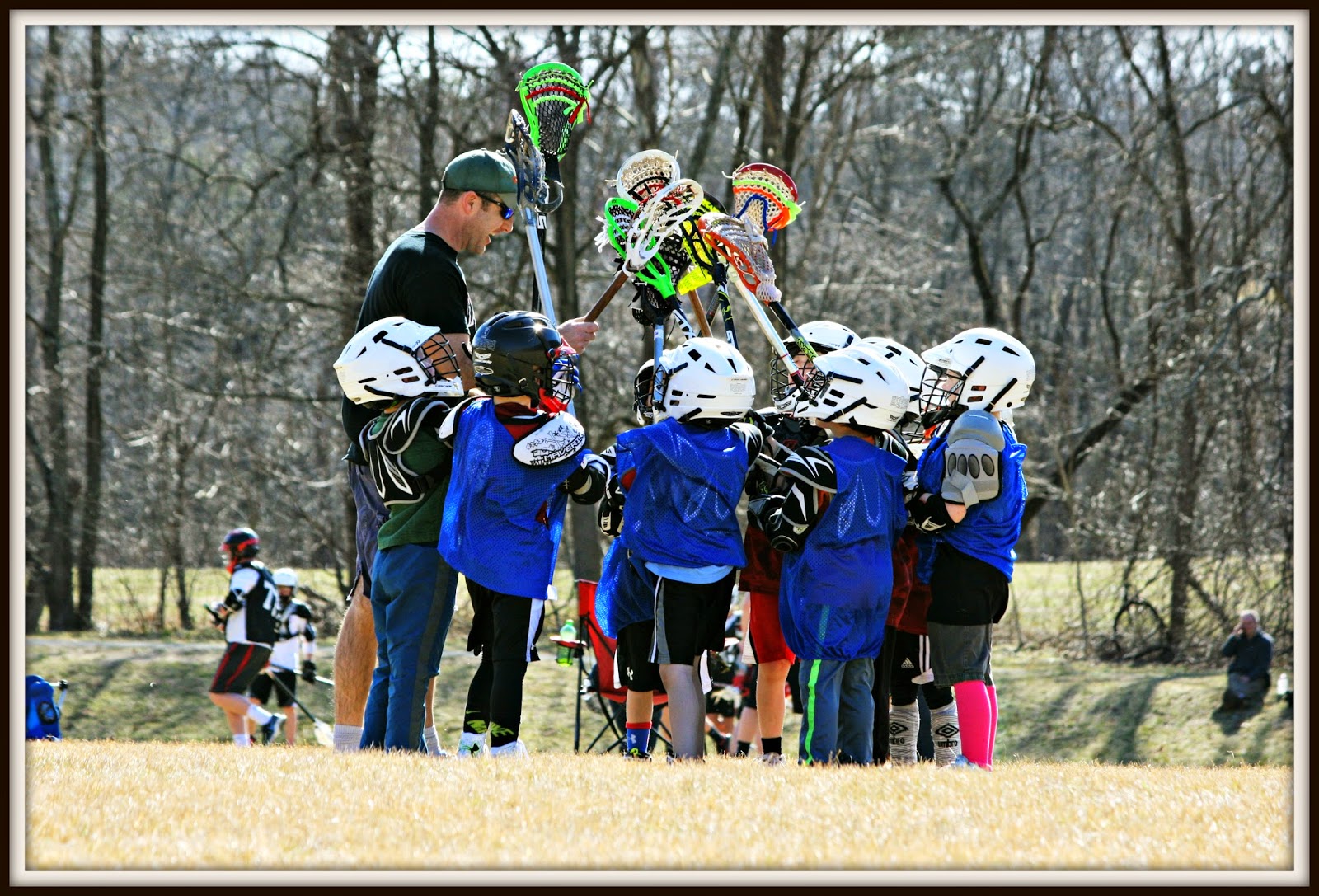 In the end, all they really need is to know they have your support, right?
Readers, do you have any lacrosse tips for me?  I still don't know how a game is played.﻿

Yes, in the end all they is is our support knowing they always have us behind them...:)JP

Looks fun,ladies played in college where I went.Guess they were tough cookies.

That is exactly what they need, Mom's support! I don't know diddly squat about the game either, but if Cort's having fun, that's what counts! :)

I know nothing about Lacrosse either. Very interesting and I wish Reid the best of times!

I'm no help - I know nothing about Lacrosse. I didn't play team sports in school either - all I wanted to do was ride my horse. She was my great escape. (half QH and half Thoroughbred-jet black with a small white star on her forehead, and could run like the wind). I named her Gypsy, and broke her myself.

I don't know much, either. My niece has been working as a trainer for a local college's lacrosse team, and apparently her little boys were thrilled to learn about a sport where you wore helmets and hit each other with sticks. lol

UVA usually has a good lacrosse team. Maybe y'all could take the boys there or another college to watch a game.

how fun! my son played for fun and we have equipment in the garage so whenever they feel like throwing the ball. I just know you fun a lot. lol
I was supportive through soccer, baseball, basketball and swimming, that's just the sports list. :) your fun is just beginning with three boys!

I have no clue at all about lacrosse..sorry Hope he will enjoy learning and playing tho!

I went to Roanoke College where LAX was EVERYTHING. Hum, if you let him practice shooting his shots accurately he'll be a regular hero. Like a shooting range. Set up cans or some other targets to hit for fun. Maybe that's later. Right now, just enjoy it!

I Googled Lacrosse. I Googled Lacrosse For dummies. I still know nothing. Something about holding the stick the right way, and cradling the ball in the scoop part. I am glad the other kid cried. That means he is not among a bunch of toughs! Good luck to you both, and let us know if you find out how to play! Because after all, you have to know when to cheer.

No idea about Lacrosse either! Reid seems like he is enjoying himself immensely. It's great that you're letting them try different sports and activities. My eldest would've loved Lacrosse had it been available when he was a youngster.

All I know about la crosse is that originated with Native Americans, and that it was used as a substitute for war.
You're right, though, what Reid needs is your support. =)

Support it the most important thing! My daughter and son have both played team sports. Both have gained much from the experiences.

That's good training for him. It will have a positive influence on his development. I guess sometimes being a good parent means being supportive of things you don't have a lot of personal experience with.

Isn't it fun to have your kids try new things that you know nothing about? I love it. I never knew that there were marching band competitions around the country until my kids got involved and then so did we. Best years of our lives. I wish you the same with whatever your kids take up.

Have no clue about lacrosse. When you figure it out, fill us in, okay?

That's a new game for me. Looks so strange. I think it will be so interesting to be played.

Those photos are really pretty! I can't wait till my kids are old enough to be involved in sports and such.. - www.domesticgeekgirl.com

I don't know anything about it either. I didn't think of it as a kids' sport.

No idea about this to be honest! :D

I don't know much about the game. I would like to know more but it is seldom shown here on TV. I think I would like it.

That looks like fun! I've never played Lacrosse. Why is it I always like the alternative sports more than the main ones? Floor hockey is a blast, pillow polo is so much fun, I loved theater ball growing up, and this looks cool!

Awesome! What a unique, fun opportunity. My youngest is kind of a wimp (oh my gosh, I said that out loud?? hahahaha) so he probably wouldn't like it. I think it's awesome though that you're out there supporting your sons no matter what they do. :)

Knowing the game or not, you're a cool mom. Kudos for your effort. :)

I couldn't help you though. Not sporty either. :P

Good luck to your lacrosse player! Sounds like a fun sport.

Looks like it's something new to learn. I only heard about Lacrosse through books. Have not witness how it's played

I have seen Lacrosse, but really know nothing about it either. I am sure when this is all said and done. You will be a pro and know all about it.

Lisa, Like you and Paul, I know nothing about this game. But I was surprised to see Cort's determination! :)

I have never seen it played-sounds interesting!

I don't have a clue. I would just be on the sidelines smiling and wondering what the heck was going on! As long as the boys love it- I say cheer them on!

ha, i like the definition of lacrosse from the play it again guy, too funny...i know nothing of lacrosse. one little boy that the boys have played football with for a few years decided to change to lacross a year or two ago and i know he really enjoys it....maybe it is gaining in popularity now with the young kids? have fun!

Looks like a blast! And you have a good attitude. As long as they're having fun, that's the reason of play, right? They look so cute in their gear!

I know nothing about Lacrosse. My sons played football, baseball and basketball... We were also a musical family --so music lessons were a big part of our lives also...

Twins doing OPPOSITE things for sure: dance VS. lacrosse. Amazing, isn't it????

It looks like he loves it! Dylan wanted to play for a while, but ended up sticking with baseball. Now, he's moving on to basketball. I hope you enjoy watching him play! XOXO