It seems counterintuitive....to head up north and find even friendlier people than here in the south.  But we met the most helpful and kind people in Philadelphia.  It really is the City of Brotherly Love (see all the kids running around the fountain below?  So fun!). 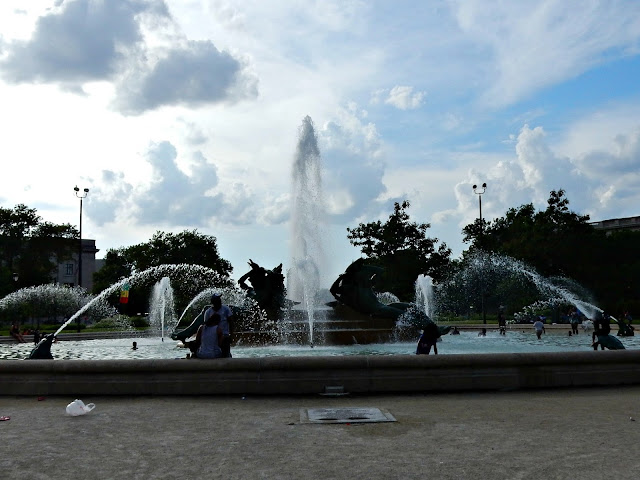 1.  I made friends with the people at the front desk of the Hilton Garden Inn on Arch street, where we stayed.  They not only helped me with my gargoyle hunting, but they gave me free breakfast coupons for me and Paul.  For all three mornings we were there!  We were spoiled with crepes and made to order omelets with fresh fruit and bacon.

2.  The a/c in my car went out on the drive up.  It's a 6.5 hour drive.  It was 91* outside.  It was 91* inside the car, with the windows rolled down, on I-95.  Not a fun experience.  So I had a little trouble when asking around for recommendations of a place to fix my car.  Turns out most of the folks I asked didn't have cars, because they lived in the city and used public transportation.  But I met one of the Amtrak conductors on a little train I took to catch a commuter train to Manhattan to visit my uncle for the day.  She was fascinating to talk to - telling me stories from her twenty+ years of life on the trains.  She was able to direct me to a Firestone a couple of miles from our hotel.

3.  I took my car to the Firestone.  Paul and I ran back from there, leaving my car for the day.  They put Freon in it, and tried to pressurize the a/c or something, but their machine broke halfway through the job.  They needed a new filter for their machine.  They thought we'd be okay on the way home (we were) but they apologized for not being able to complete the job 100%.  Then they didn't charge me.  And on top of that?  They also fixed a tail light that was burned out.  At no charge.

4.  We went to Hard Rock Café one night with Paul's boss and his wife.  It was crowded and things were moving a little slow.  Then they accidentally burned the burgers for two of us.  As a result, they didn't charge us for those burgers, and they gave us a round of drinks for free.

5.  A couple of times when I asked for help finding a place, I had people that left their jobs (at the hotel, and at a restaurant) to walk me to where I needed to go.  Wow.

In conclusion, Philly is awesome for all the history and museums and fun things to see.  But what struck me even more was how fantastic the people were.  Their impressions will stick with me even longer than the Liberty Bell.

Readers, when was the last time you met an incredible stranger?

Oh Lisa that is incredible it just reaffirms my belief that the world is full of more good people than bad. They never put this stuff on the news. I am glad you had fun in Philly. Hug B

Never been to Philly but it sounds unusual for northern cities. I wonder how much positive expectation and attitude plays into events... Norman Vincent Peale would be proud :-) I meet extraordinary people, my clients, at least once a month. Too bad my job has me only visit them at most 3 times.

The last time I was in Philadelphia was July 1976. Sounds like things have changed considerably since my experiences did not mirror your own. About the only things similar to our two trips was the heat.

What an awesome trip, people wise. When we think the world is all terrible, we find there are still good people out there. With the heat, so glad you got the AC in the car fixed enough to get home. I have been to Philly and you are right, very nice people there. I cant remember the last time someone, out of the blue, was extra nice, but I am sure I have encountered one here and there.

It's so refreshing to read this, it does happen, they are out there, and when we come face to face with it, the warmth it brings makes a double win. Enjoy your stay away!

Pretty amazing, makes me want to go there.

Our air in our Honda, Pilot keeps going out. We may need to get a few newer vehicles in our near future. Boo! I just don't want more payments added.

really nice to hear about places with great service and people who go above and beyond to help. :)

Hmmm, took me awhile to get past the mention of bacon! Now I want BACON!!! Great post. Haven't been to Philly in a while...and I am trying to watercolor the Blue Ridge Mountains for my daughter, because she absolutely loved her journey through there. Aloha!

Wonderful!!!
To tell you the truth,, one day mommy was at the store with a full cart of stuff,, and a lady in line in front of her,,, helped put her grocerys on the belt,,
that was cool,, aye?
love
tweedles

I'm glad the people were so helpful! Sorry about the air conditioning.

Good Morning, Lisa!
This one is a great post. I love reading your stories...
It is awesome that you and your dear family had a great time in your trip
to the Northern States. I am sorry about what happened with the a/c in your car. Yes! People could be very nice if they want to, and I am glad to know you found the perfect folks to make your trip memorable and enjoyable.
It's good to hear you went to Manhattan for a day visit.
One of my best memories there is the World Trade Center, the Twin Towers.
New York City won't ever be the same again without them. I used to work in that area for many years when I was a young lady.
Tomorrow, Sunday, it's Father's Day. Have a blessed time with your folks!
Happy Father's Day with your dear family!
Well, I truly miss you, Lisa, since I don't see your posts in my blogs.
I don't know why you don't visit me...You may send me Emails, if you wish.
God may bless you all.
Blessings,
Poet Starry.

Yuck to the AC dying on you however, the shop certainly was good to you as were your other experiences while there!...:)JP

It sounds like you had a fun trip (minus the air-conditioning mishap). I'm glad you met some nice people! That always makes the difference!

This was all so wonderful to hear. I don't usually expect that from a big city. You are the only blogger I know who when she says "we ran back" literally means just that.

It sure is wonderful to see that people are still able to be kind and helpful.
I am glad to hear you made it home safely.

Probably the Tripe A (AAA) tow truck driver who diagnosed that my car had a bad starter and not an "electrical problem". He said, "Try and start the car, I've been a mechanic for 45 years. It's the starter". Not even with electric monitors could my mechanic find the problem after 4 tows! The tow truck driver even called around town and found a starter for me!! :)

Isn't that nice that we hear some positive people stories!! Hooray! It's nice to have faith in humanity again.

I love stories about people who go beyond the call of duty. There are kind people everywhere, and it's nice to hear examples of that. I went to Philadelphia in 1976--I was just 13--but remember what a good time I had. Back then, you could actually reach out and touch the Liberty Bell.

I am so happy to hear you have found Pennsylvania natives to be friendly. I love it when I travel and find people are so friendly. I will be headed to your state very soon... hoping to find some friendly people.