Building a Rabbit Hutch From Pallets

Paul is pretty handy at various projects.  Over the 19 (!) years we have been married, he has built me sets of horse jumps, a dresser, a tack trunk, and a tack storage shed.  And that's just to name a few things.  In August he worked on building me a pair of rabbit hutches from pallets. 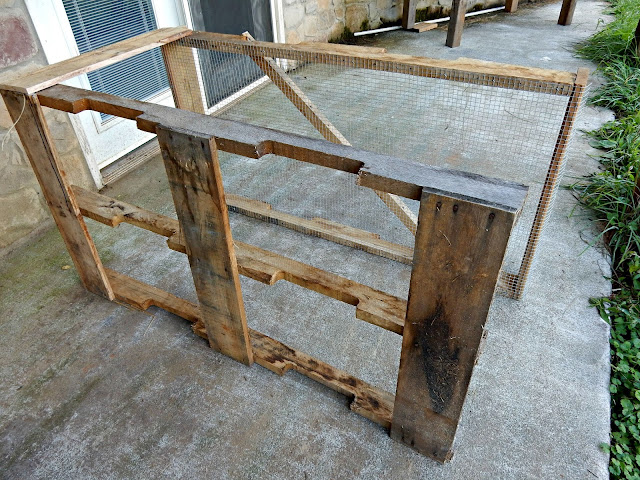 He had to disassemble them to a certain degree first, but then he got rolling.  The first one took him a couple of weeks to make, but then the second went very quickly. 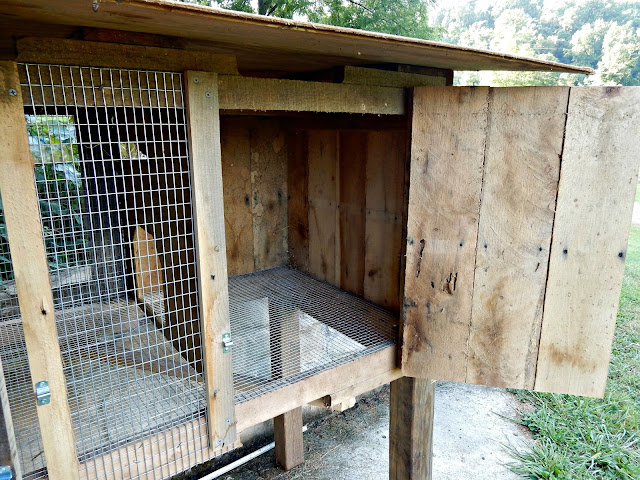 On one side he created a door to a closed area so the rabbit could in from the wind.  We put some hay in this area. 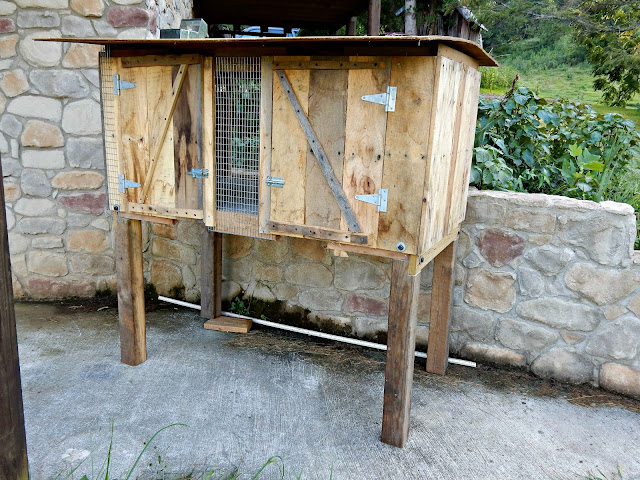 The other side is more open and the back side is open as well.  Food and water is located on the left side.  Didn't it turn out wonderfully?  Paul thinks he spent about $25 on the hinges and wiring for the two cages.  Not bad at all!  We plan to put a tray underneath to catch the droppings for the garden. 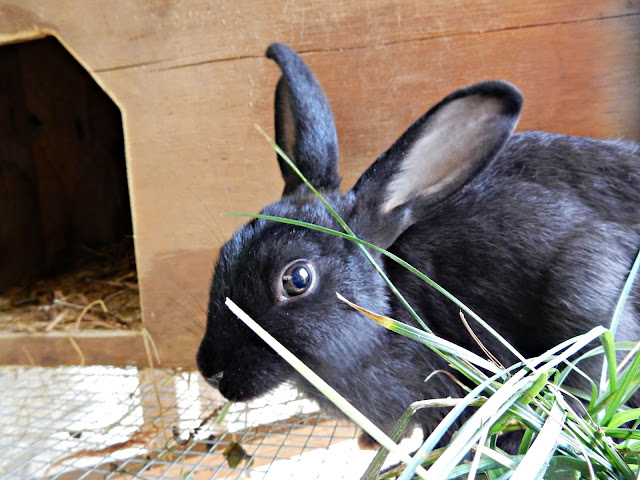 I don't know about you, but Delilah certainly seems to like the new digs!

Great job!!!I have a few very similar housing over 3 dozen of these critters.

I agree, she looks so content. Well done, Paul! Reminds me of when my dad and oldest brother had rabbits, and their cages.

Hope you had a good weekend. :)

He does seem handy! My husband is handy, but complains the whole time. He'd rather be working on sculpture.

Very nice cage and your hubby is so talented. As bad weather approaches, the cage will be snug and warmer.

Good job on that bunny house! I found a cheap place to get hinges, the habitat store in Rocky Mount had a bunch of used ones when I was building my chicken coop. Not as nice looking as his but cheap, you may need a second house before long. That is a pretty rabbit.

Delliah is so cute and I love the pallet hutch. It turned out great!

oooh, you guys did GREAT!!! When i was a kid there were plenty of 4-H rabbit projects . . . and the trays not only supported the garden - but they had worms - which might seem icky to a city girl (I'm a little half & half) - BUT, those worms, not only helped their gardens, BUT, made extra cash - because fishing fans liked live worms the best . . . we all found ways to earn extra cash, so we had plenty of extra credit when we went o summer camp - Summer Camp was a BIG EVENT to my cousins.

How handy is he? Those turned out really nice.

Thats a great way to use those old pallets. I bet he could build the boys a club house.

That is a nice hutch!

You remind me to do fixing on the old chicken hutch for the rabbit. Thank for reminding.

Hubby did a great job! You're such a talented family!

Hope they don't get loose in the garden! Actually looks very well made...:)

You have a rabbit! Delilah is beautiful! And Paul built a great place for her. Does she ever come into the house?

Nice work. I can build things but they don't look so "finished." I'm afraid my craftsmanship in carpentry doesn't compare with your husbands.

Wow, very nice job!
Oh it must be so fun to see the fun things that hubby can create for you,,, !
love
tweedles

Clever! Always great to save money when you can.

That's a great little home for a rabbit. What a handy man. My husband is handy to. He often gets distracted, and doesn't finish jobs right away.

Pallets are very flexible in my opinion. I have used them for my bike storage and a few other storage solutions around the house. I guess I have yet to explore them and transform into even more interesting ideas like this.