When Rural Living is Hard

I love living in the country, and I can't imagine being happy anywhere else.  But there are rare occasions when it does have some cons.  Like when we had the (as my neighbor called it) deranged madman on our property in October.  Or when Pierce broke his arm and we had to get him to the hospital.  Needless to say, I keep a very extensive first aid kit in the house - it fills up a huge Tupperware.

Last month Cort had a combination of an asthma flare up and a nasty batch of croup that gave us one of those middle of the night scares, when he really couldn't breathe.  It was scary, for him and for Paul and I.  As much as I hate giving him steroids, I was thankful to have a bottle in the fridge to give him when he wasn't responding to his nebulizer.  It was midnight and I wrapped him in blankets and took him out on the porch in hopes that the night air would help the croup portion of his breathing issues.  Luckily, it was a mild night.  So I sat in a rocker in the dark and we looked at the stars while he sat on my lap and we waited to see if his wheezing and coughing would calm. 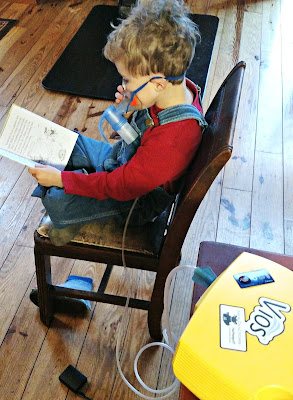 After it did, he came in for some hot tea with honey, and was able to go to sleep.  I tossed and turned and worried for a while before finally falling asleep.  We were lucky this time.  I really hope that he outgrows his asthma as he gets older, like I did.

Readers, what would you not like about rural living?

Running out of food can be tough. I can bring home frozen items easier in the winter.I am 1/2 hour from the doc, so that doesn't seem real bad.Instead of miles one refers to the time it takes.

One of the things that I really don't like living in the country is the amount of chemicals the farmers constantly spray on the surrounding land. They don't plow anymore it is all chemicals, GMO crops and all the animals get dosed with antibiotics, sick or not. They seem so ignorant about the whole thing even though they are getting rare cancers.

I think the things you mentioned would be hardest for me too. I am also an extrovert, so seeing people...even if I'm not talking to them...is good for me. We live just rural enough that we don't have many "neighbor issues", but close enough to everything we "need" that it fulfills me.

I'm not there yet, so ask me this time next year! We are still house shopping, but have not found the right place for us yet.

Used to be the medical side of things was the number one issue about rural living around here but these days we still are only about 30 minutes from a hospital.

I honestly don't see any downside to rural living myself. I hate neighbors that are any closer than about 200 to 300 yards anyway :)

The one disadvantage seemed to be that when we were out of something unexpectedly it was a minimum 30 minutes trip just to the nearest little town that had a store. Then they opened a Dollar General five minutes down the road!!!!

the worst i've encountered out here is neighbors who LOVE target practice. with semi-auto weapons. and a cannon. yup, black powder cannon that rattles the windows on my house and makes me, the dogs, and the horses jump out of our skin.

Well, as you point out, it's a long way to town if something health wise crops up. But that's about it. I couldn't live in an environment where I had to worry about other people every time I wanted to do something. Or they would do things that made me angry. I'd wind up in jail. So I guess I will just stay out here unless my wife makes me move to a town. Then she can come visit me in jail!

Having severe asthma and COPD steroids can really be our friend at times. I don't like them either but when you can't breathe nothing else matters. My children never had asthma attacks which I was thankful for. I can't imagine watching them when they can't breathe. I pray he outgrows his asthma. Mine didn't start until puberty. I am glad that he got better after the medication and sitting outside. Just relaxing can help so much.

I would like the quiet! But I can see where it gets rather difficult when health issues arise like with little Cort. Hopefully, he will grow out of the asthmas as you and brother did.

Man poor guy - he has had it rough - I hope he feels better.

We hate it when the neighbor target practice with automatic guns,, or hunting season when guns are going off everywhere.. Sometimes the road to town floods,, and in emergencys, that is scary to know you cannot get through fast if need be.
Were glad you have what you need to help your family be well.
love
tweedles

Oh dear...asthma. That is terrible. Yes, i heard if the child grow older will grow out of it.

I hope he outgrows it too. :( I liked rural living, but I was the only one who did the yard work for the most part, and it was a lot of work. I started to really love it, and it was so therapeutic at times too, but still... it was a lot of work. I kept wondering how on earth I'd be able to manage it as I got older. I do miss changing leaves, the deer coming to visit, and well, just all of that beautiful scenery and land, but I'm happier now in the city. :)

I hope he outgrows it, too. Such a nasty thing to suffer from--feels like trying to breathe with an elephant parked on your chest. I bet his back aches, too, from the strain of breathing.

That must have been a worrying experience for you, so I do hope that he soon grows out of his asthma. We live in a rural part of France but are still relatively close to the amenities we need, but the worst part is the language difficulties....making ourselves understood to French people, and then understanding what they are saying back is the most difficult part of living here, plus the official documents like bills, etc, which, of course, are all written in French and which we have to decipher!

I am sympathetic to Cort's asthma and how very frightening his flare ups are to you and Paul. My mom struggled terribly with asthma and several of her grandchildren have asthma. Most of them have improved as they have grown older and I sure hope that is the case with Cort.

I apologize for being slow to comment. Problems with blogger have continued but I think all is well now!

We live in the city, so I wouldn't know country life. I imagine I would miss the 5 minute drive to get a pizza or get something at Target. I would miss plowed streets in winter. I would NOT miss my neighbors though.

I think I would dislike being far from life's necessities like a grocery store, hospital, etc. I would also miss fast food even though I shouldn't eat as much of it as I do. It's smart that you keep so many things at home though to help out in scary situations!

Poor Cort! I hope he improves to the point where he doesn't get these episodes. Does he get plenty of vitamin D?

Oh Lisa this is scary I was a young Mom on a busy farm with a daughter who was always getting hurt and it is so scary. Cort will be fine he is strong like his Mom. Take care and it will work out. HUGS HUGS B

probably the same worries you have. We do live on a farm, but we are just 20 minutes from several urgent care facilities.

Asthma can be very scary. My brother use to have spells. I remember them to this day.... Thankfully he pretty much grew out of it.

I grew up in the country and I really would not like to go back to that. I like being on town water so when the electricity goes out, we still have water. I like being close to conveniences if needed. Perhaps I've become spoiled. But I remember being without power out in the country for a week at a time. No. fun. at. all. I hope Cort's asthma lessens too. Poor guy. I know it's very scary when he's having an attack.

I think rural living would be wonderful on many levels. I can see how health scares can be tough when medical treatment isn't close by. I am glad you have such a large first aid kit. So many kids outgrow asthma, and I hope your son outgrows it soon! :)