Over the winter break we made a couple of trips to the library.  The boys enjoy it and I can always use another stack of books to read.  I was in the children's section on the computer when Reid came up with these two books.  I don't know where he found them, but they did look rather interesting. 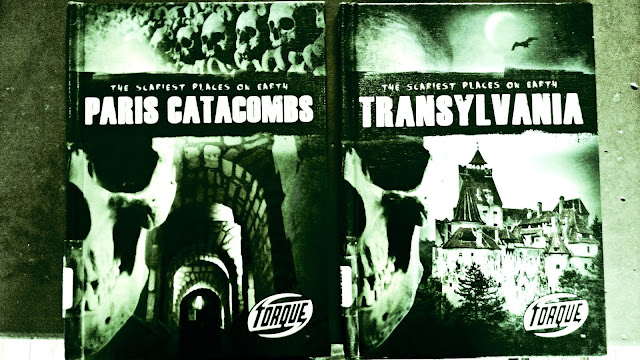 In fact, I wanted to read them myself.  Reid said that I could, after he read them first.  Afterwards, he started talking about ghosts all the time, and he talked his twin brother Cort into reading these.  Next thing I knew, the boys spent a whole day in the basement hunting for ghosts.

But at 4 am the next morning, Paul and I were awakened by some yelling.  Upon investigation, it was Cort.  Screaming over the ghost in his room.  The face, trying to get him.  He said it wasn't a dream, that it was real, and he was terrified.

I told him that newer houses don't have ghosts.  Only very old houses.  That worked for a night.  Then again, two nights later, more crying at 4 am.

Meanwhile, Reid has ordered the entire 'Scariest Places on Earth' series from the library system.  There are about eight other books.

I'm thinking Cort doesn't need to read these books when they come in.  Reid will just have to keep them to himself!

Readers, what scared you as a child?

imagination can get the best of us

I'd say Cort has a good imagination, and, oddly enough, getting scared like that is a good, healthy thing. Me, I was a bit of a clueless dim bulb I guess. I do remember when Rosemary's Baby came out though. I was too young to see that and it scared me.

I was terrified by the story of 'The Snow Queen' as a child, I didn't want my heart to become a block of ice!

i always thought the rise in the roof like the barn in my last post was for pulleys to lift hay and tools into the loft.

What I remember most is when we lived in Panama on the air force base, and we had huge tarantulas that crawled all over the place. I had nightmares about those, and the jungle that was right in our back yard. I dreamed sometimes that I would get lost in that jungle, but of course my parents never let me near it. Just childhood dreams. Later on I played in the woods by myself and never worried about it.
My daughter used to have night terrors (come to find out over an Indiana Jones movie) and those are not anything to take lightly. Very frightening to wake up to a child screaming like a banshee. I will never forget those few months that she did that.

My biggest scary moment was from watching the movie Birds! I pretty much wasn't afraid of too much otherwise. That I can remember now anyway. I was a very adventurous child, and the unknown was always interesting to me!

I am going to see if I can find both of these books, I know two boys that would enjoy reading them! Thanks for sharing these.

I used to have dreams about being eaten by sharks. Which was really odd since at that time I lived no where near an ocean but I had read there were evil attack fresh water sharks in Africa and I was afraid some shark would swim up the Mississippi and get me.

I love the wild imagination your boys have.....But I had a feeling where the story was going to go!

We lived close to Dublin Zoo as a child and I was always afraid that a snake would escape and make its way in to my bed!!!

I don't remember having nightmares; my biggest fear was having someone mad at, if that makes any sense. Our Rylan has nightmares sometimes but she won't talk about them.

Probably I'd be with Cort, reading things scary isn't my thing. :)

At that age the scary imagination doesn't need a lot of outside stimulation. At least that's the way I remember it all as a child....:)

Awww.... poor kid being scared of a ghost. I think he doesn't need to read the books either. No need to scare him more.

Am a big kid. Am also scared of ghost. I dont usually reads horror story as i know my imagination will run wild at night

I agree with you that the rest of the series can't be shared. Sorry to hear about the nightmares. They happen. I don't remember what sacred me as a child, but I have read lots of books that scare me as an adult! :)
~Jess

CLOWNS!!!... and I read every Stephen King out there... no need to tell you IT scared the h*ll out of me.

Yes, I remember nightmares like this. Entirely understandable. Like Cort at his age, I too had understanding parents at 3 AM! I like the creative explanation about "new houses". Very cool! ;)

There was a movie my friends and i saw called "Wait Until Dark" - we were all high school drama students - the dang thing scared us all crazy . . it was weeks before we felt safe again (and, considering what's available today, it was rather tame . . sigh)

me and reid would get along great! there's a scary movie about the paris catacombs, it was pretty good! when we lived in missouri and braden and dalton were only about a year old they would both wake in the middle of the night, stand at the ends of their cribs and scream and cry hysterically, both looking at the door that led outside...this happened quite often and about at the same time every night...then after we moved to georgia and the boys were about 4 or 5 they happened to bring up the missouri house and that they didn't like it because it had monsters in it...hmmmm, makes ya wonder!

These storys you share are quite interesting!! Its sad he was scared though.
To this day,,, we make sure our feets are covered so nothing under the bed can grab us.. Oh yes,, and flys on the walls, No books though.
love
tweedles