Yes, I'm still running frequently.  I just don't blog about it much lately.  This year I ran more than I have ever run before.  I got a little obsessed for a while.  Then a hamstring/glute issue let me know I needed to back off towards the end of the year.  Which I did.

I ran 5 races this year, because friends talked me into it..  Four of the races were local, but one was at the beach.  I placed in the races, and even won one of them (they were very small races though).  I entered the local ones into a regional race series, and placed in that, too.  I still don't like racing much though.  It stresses me out. 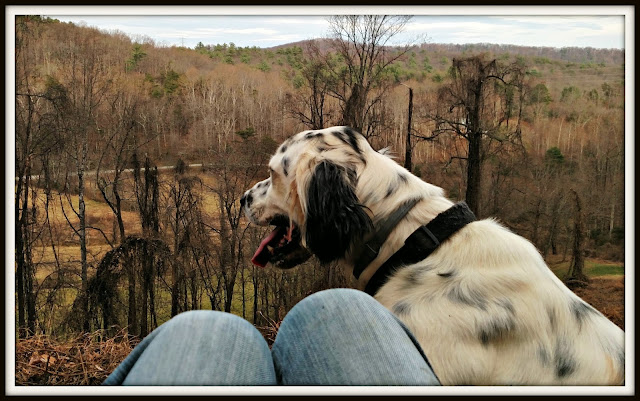 You know what I do like?  Just running.  Me and my dog.  Even though sometimes he does sneaky things like poop in the middle of my running path.  Guess what?  Dog poop sure blends in well with the leaves this time of year.

I don't know if I'll ever run that much again in a year.  It was several hundred miles more than my previous higher year, so I kind of doubt it.  But maybe I'll sneak into a couple of races in 2016.

Readers, do you have any fitness or health goals for 2016?

well now I am even more IMPRESSED 1800 miles 150+ books,and all the rest!!! :-) Congrats on the win and placing. I used to run a lot and always with my Old English Sheepdog, Dermod, I wasn't racing material though.

i never thought of trying to keep mileage on my treks, but it could be fun.I get shocked at how far I drive just to play each day.

I plan on working the Lowes plant area job this year and that will be my big exercise but I have to find some insoles for my boots as the concrete really messes up my feet and lower legs. I never figured that just walking on a hard surface would do that. You can probably tell a difference on the kind of surface since you run so much.

Wow! That is GREAT! That is a LOT of miles. I wish I could run, but sadly, I am not a runner.

I need to get back into a routine. I like to swim, but then you gotta get wet...and then it takes a lot to do your hair and put make-up back on again...and....ugh...swimming is a lot of work afterwards.

Strengthening my heart is my main goal this year... so along with the tai chi I've added cycling. Per the cardiologist's instructions I'm gradually increasing my time rather than go full tilt but I'd like to work up to at least a half hour of each, switching every other day.

That's a lot of miles, girl. I haven't even driven that many this year. I'm sorry you got hurt, though, not good.

My goal health wise this year - to watch diligently food package labels and where it was actually originated from. I don't ever want e coli again, or anyone of my family members. I still can't believe how much of our food is "grown" in China, Thailand, etc. If we look at labels, and it's stated "distributed from"; so much is actually distributed from the U.S. but as I mentioned originates elsewhere.

Whew! Now that's some running. I have exercise induced asthma, so although I ran track in middle school, I never got terribly serious about it. (The inhaler issue was rather discouraging.) Biking? That was another story. I LOVED biking. Of course, post baby, neither of those are the greatest option. Here's to doing what we can, when we can, and celebrating the epic times.

Way to win! (Small or large race, you rock!)

I was a runner in the Marines, and competed in a lot of the 3 mile races. You needed to be able to run three miles in under 18 minutes, in boots, to do that.

But alas, those days are over for me. Have been for some time. Now I walk in the woods, and get the same physical benefit, as much as a man my age can.

I understand the stress associated with running a race. I used to be almost sick for three days or so before each race. I wouldn't have competed but in unit competitions, someone else signs you up for events based on their assessment of your chances of winning. You can't say "no thanks."

glad you had a good year! and laughed at the dog poo blend...

Lisa: Congratulations on a very admirable year of hard work and dedication. I'm blown away at how you juggle so much, and I'm certain I'm not alone. The dog "pit stop" story was funny. I hope you are proud of what you've accomplished. I moved out here to get healthy 9 years ago at Mayo Clinic, lost 15 waist sizes (90 pounds) and maintain with the 7 day routines with alternating weights and cardio. Wishing you a Happy and Healthy New Year! :)

Holy crap!!! Ya know that cardio saying from the zombie movie was a joke right? Kinda like the joke about the twinkie and all.

One thing is for certain if we were getting chased by zombies I would just shoot you in the leg cause it's a sure bet you would run faster than me :)

That is incredible! You had a stellar year, that's for sure. Someday I might take up running. I want to run, but I just don't like it - walking I love, running, I don't know.

Excellent, Lisa! I imagine it's very peaceful running with your dog. This is a great picture!

Wow, 1800 miles! I'm always amazed at how the miles add up, it happens when I walk my dog regularly! My fitness goal this year is to go to yoga every day that I don't have work!

You've got a nice running partner there!

For me, I'm just aiming at getting back into a routine! And ensuring my plantar fasciitis doesn't flare up (it hasn't for a while, because I've been careful about stretching and stuff). I'm also working on getting my riding muscles back in working order!

I just want to stay as healthy as I possibly can. That is my goal.

Interesting, running is a hard thing for me...

Wow, 1800 miles--that's incredible! I've tried running, but instead I just like to walk--sometimes briskly and sometimes more like strolling (depends on the day and how much I have on my mind). I never thought to log my miles, but now I think I want to do it. What a great idea! Happy running!

That is a lot of running. My older sister runs a ton to.

Amazing to learn how it all adds up like that! You do inspire me with this post!