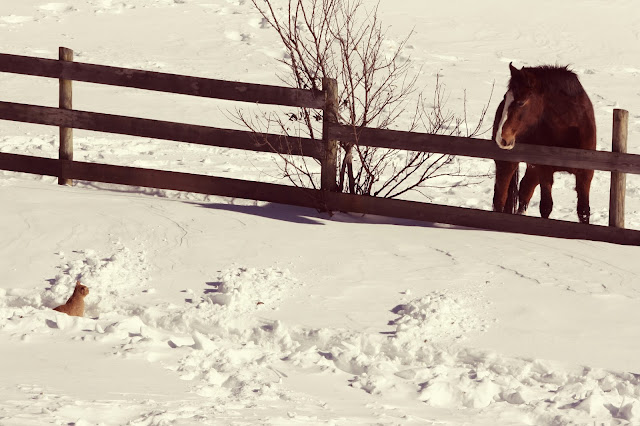 Bobby thought snow was fun!  He leaped and jumped and ate bits of snow.  He chased his own shadow. 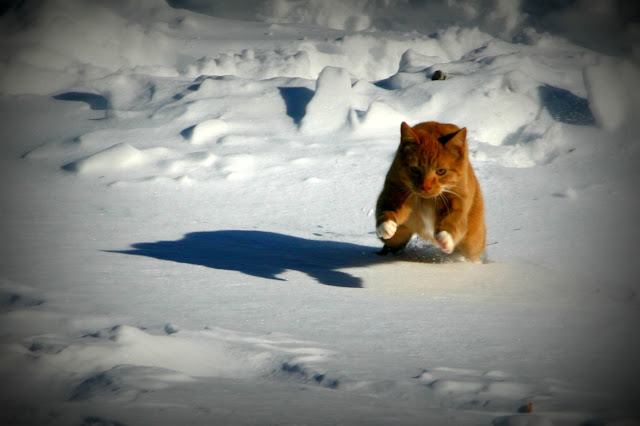 But then?  Then Bobby got alarmed.  Bobby arched his back and puffed his fur like the abominable snow cat. 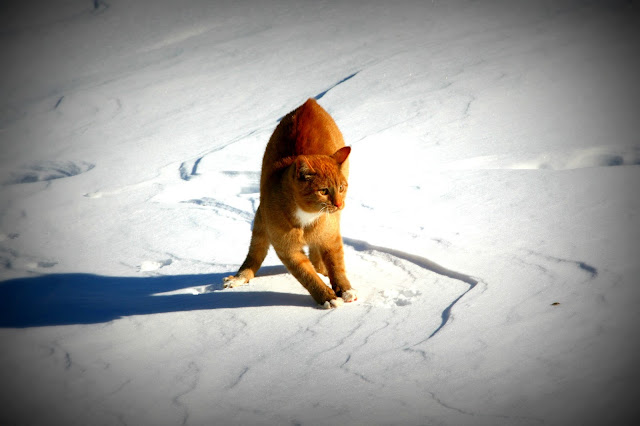 The source of so much drama?  Yeah, this guy.  Naughty bird dog! 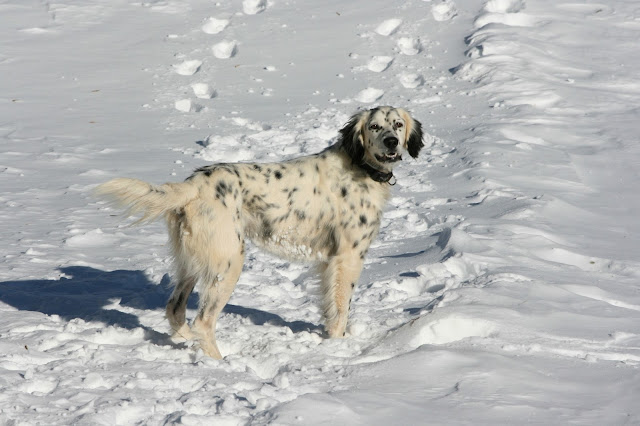 How adorable! I never saw a cat play in the snow before (mostly because the cats in our family have always been house cats). Unfortunately, we don't have our own cat because my husband is extremely allergic. It's so much fun to watch animals in the snow. I love the little bunny in the picture looking at your horse...so, so, cute!

Happy Friday Lisa. Oh, I love these pictures. Bobby sure was having fun in the snow. It has been "interesting" introducing my 5 cats to our new dog - lots of puffing up and hissing!
Have a fun weekend.

Our cats will deal with snow but avoid it if possible. Dogs just have fun no matter what but when it is real cold I don't have trouble getting any of them to go back to the house. You do have a snow cat.

Most of our cats have the dogs pretty much bullied these days. They just swipe at em whenever the dog gets close. Not sure how that situation changed but it did. I think the dog got old. None of the cats like the snow though.

The catz were asking me for warmth yesterday. Had a cute black baby show up while we were moving sheep around.Have all the critter out at the new place, I hope they like the larger area.Need to do a lot of fence in the spring.

What funny Bobby is having in the snow! Love the action shots. I can imagine the fun he had shadow chasing. :)
~Jess

Bobby is adorable! And that is some amount of snow

Bobby looks so tiny in the photo with Frannie! That is an awesome photo of him running in the snow. He is a beauty!

Great pictures. You folks have a great rural life going on there. As far as I can tell, it's just about perfect.

My Hobbes used to like the snow like that when he was younger. Now, he likes the fireplace so much better.

Love the photos! Who knew a cat would enjoy the snow....

So, cute. Cats playing in snow how fun that must have been. My poodle loves the snow so much she rolls in it. She comes in with little snow balls stuck in her curls.

Lisa: You remind me of an interview I recently watched with actress Wendie Malick, as she and her husband have a ranch with horses, cats and dogs too. These photos are great!:)

That drama was better than watching the Western that's on at the moment...LOL!...:)JP

My cat follows me everywhere, even on the frozen wetland! Glad to see another 'normal' cat!!! Our snow has all melted. (ツ) from Cottage Country Ontario , ON, Canada!

I love these pictures! Great shots, my friend!

What a beautiful trio! And I can see how a happy busy dog would alarm any cat. ;)

That's so funny! I thought cats hated things like baths and snow. Humans have different likes and dislikes; I guess other animals are the same way.

That's funny that he likes snow. Most of the cats I have had don't like, never liked it