The Problem with Nancy Drew

For the past year, I've been reading the boys some of my favorite books from my childhood.  Books like Superfudge, The Pink Motel, and The Mixed Up Files of Mrs. Basil E. Frankweiler.  Recently I decided to read them my favorite Nancy Drew book.  As a kid, I think I read every one of them. 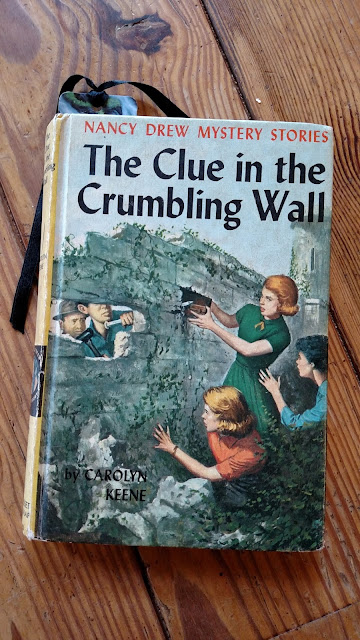 The Clue in the Crumbling Wall started off well enough.  By the time the boys' Spring Break rolled around, we were about halfway through the book.  We headed off one morning to run some errands.

I was unsuspectingly browsing through Dollar Tree when the boys started getting worked up.  They were certain they had seen a shoplifter.  Someone had stolen some pens!  They were quite insistent on reporting the matter to the manager.  But they didn't just report it.  They made all sorts of suggestions to the manager about how to catch the crook, including fingerprinting throughout the store and using hidden cameras.  They even suggested that the cashier had been hypnotized by the criminal, which was why she didn't see him leave.  Luckily, the manager seemed to find this amusing.

I dragged them away.  They insisted they could describe the thief for a profiler.  I decided I was going to need some coffee before we went anywhere else.  In the drive thru line, the boys saw a dad with a toddler.  The boys decided this dad was the thief!  He had magically appeared at Starbucks!  I asked where the toddler was during the theft, and they said at first that the toddler was an accomplice.  It didn't take them long to reason this out though....the dad was really a kidnapper!  I asked why there was no Amber Alert and they said that people didn't know yet.

I was pretty nervous about what might happen in the grocery store, as the whole way there the boys insisted that a black car with the thief/kidnapper was following us.

I banned any further reporting of criminal activity before we went in to the grocery store.  But there were a lot of suspects in there.  The grocery store was just full of crooks that day.

The next week I got to go grocery shopping and errand running by myself.  It was so nice and quiet.

Maybe next we'll read another Little House on the Prairie.  That seems a little...safer.

I am kind of glad that I didn't run into you that day they may have turned me in to the authorities. I have seen police cars at work recently, it seems that shop lifters come in and work as a team, the obvious one is really creating a diversion for the real thief who slips out the door sometimes in a wheel chair. The boys would have fun over there!

you put a smile on my face this morning...thanks

did you buy them each a magnifying glass at dollar tree?

Ha ha, too funny. I do the same thing when I read the news about the elections. Crooks! All of 'em!

How about the hardy boys, they were always getting into trouble

HaHa! This was so funny! What imaginations!

That is so hilarious!! Love this little story!!

This is so funny!! I love their imaginations. They should be writing stories. :-) Have they ever read Encyclopedia Brown?

This is hilarious, Lisa! I think it's wonderful that the boys have such imagination. It's better than being hypnotised and addicted to video games. I read The Hardy Boys to my four children and they are still talking about it today

What a lovely chuckle this morning, thank you for sharing it!

You are a wonderful Mum taking the time to read stories to your boys. I remember the end of day stories at bedtime when mine were young. They were magic days.

What imaginations!
You should read Encyclopedia Brown to them. I remember trying to solve those mysteries before the teacher turned to the back of the book.

I was always a Tom Swift fan. I bet your sons would love those books, but I don't know where they can be obtained these days.

That's so funny! It seems you have some protectors on your side. They could make great detectives in the future. Tell them they need hard core evidence though. Ha!

Love it! It always makes me laugh when little peoples imagination runs away with them.

LOL I love this and it made my morning. Sounds like you have some future detectives on your hands :)

This is so cute! I love it. We wrote and filmed a video when grandsitting one year. Foam Girls! Such fun!

This made me laugh! At least they're creative, right?
I loved Nancy Drew mysteries when I was a child, and I'm trying so hard to convince Lexie to read them. Maybe I need to start reading them Lily!

this is so funny! I'm laughing so hard! lol

This made me smile. Your boys are very smart and I am sure they would crack the case wide open with their sleuthing. I, too, was an avid Nancy Drew fan. I had all of her books. Sadly, my mother did not keep any of them. :(