Pierce is in third grade, and one of the big projects they did this year involved choosing a famous American to study.  Pierce chose Christopher Newport.  He wrote a biography report on him, did a painting in art class, and had to dress in costume for the PTO meeting.  I confess I had to google pictures of Christopher Newport so we could figure out what he looked like.  I don't think he typically wore a backpack....but in this picture "Christopher Newport" was waiting for the bus. 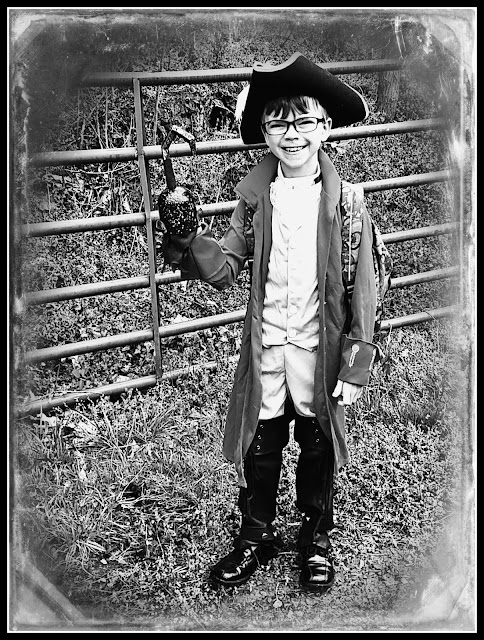 At the PTO meeting, they had a wax museum.  The students stood in costume in the halls with the portrait they had painted of their historic person.  Each kid had a button on the wall, and you could "push the button" and they would tell you all about their person.  It was really fun and the kids did an excellent job.

Readers, who would you choose to study if you researched a famous American?

what a neat history lesson

I was always a little partial to Francis Marion the Swamp Fox.

Pierce looks great. I don't recall any of my kid's schools being that creative.

He's adorable and what a great costume! Goodness... There are so many people I'd want to study, which is part of why I branched into historical fantasy I suppose--so I had a valid excuse.

Pierce looks the part on top of being adorable. Love this. :)

The boots really make it. Fun!

Now that is really awesome! I just googled him to see what he looked like. Way to go Pierce. Sounds like it was a fun time.

He did a good job with it, nice to know they aren't teaching the same propaganda that my daughter was fed at Boones Mill.

Pierce looks great! I don't know anything about Christopher Newport--just that a school is named for him. :-) I'd have to push the button to learn more. Sounds like the boys go to a great school. Coming at a subject from different directions--history, art, performance--is wonderful.

Since FREEDOM has always meant so much to me, I would be Abraham Lincoln..definitely..."honest Abe." How about you, Baby Girl...who would you be...Madame Curie???...:)JP

Pierce is growing up so fast! I'm ashamed to admit I don't have a clue who Christopher Newport was. Apparently I slept through that history lesson. The wax museum in the hall is such a cool idea. Have a great Thursday!

I have read a good deal about Francis Drake, but never heard of Christopher Newport until I read this post. Quite a character. Sailed with Drake as a young man and never looked back. The article I read was entitled "Admiral of Virginia." Your schools are doing a good job, seems like.

What a creative project! Kudos to your school system. Pocahontas!

Great idea and history lesson for the kids no doubt. Greetings!

He looks happy! That's great that he's studying someone he can use a costume for.

Mica keeps picking Thurgood Marshall to study. I'm not sure why. He doesn't seem to be picking him because he knows a lot about him. He honestly likes him.

I think I'd pick to read up on Amelia Earhart.

I've visited the Dr. Martin Luther King Center in Atlanta and listened to his sermons on CD. It was amazing. But there are so many people to study. The more I read about your boys, the more I remember about my teachers when I was their age and we studied some amazing history.

You are such a great mom!