During our trip to DC I hadn't really planned on going to the National Zoo.  It's a little out of the way of most of the museums, and it is huge with lots of walking (and the day we were there was 90*).  However, the twins had watched some movie in Social Studies about the baby bald eagles at the zoo, and were insistent that we needed to go.

So, we made the detour to head up there.  It was actually a good move, as the pandas were active that day, and every other time I've been they weren't out.

The boys found a fountain to splash around in and cool off some by the seal exhibit.  It really was a hot day! 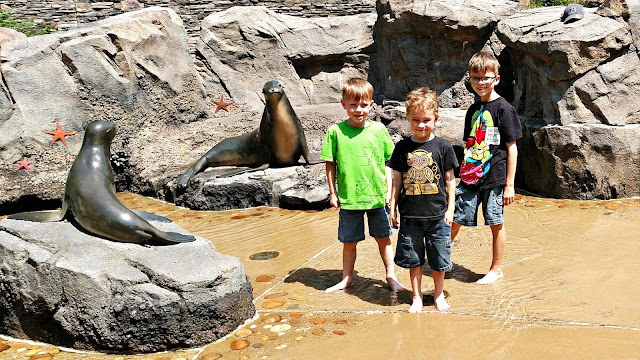 The zoo had a special art exhibit sprawled throughout that featured sea life sculptures made from trash.  They were all excellent. 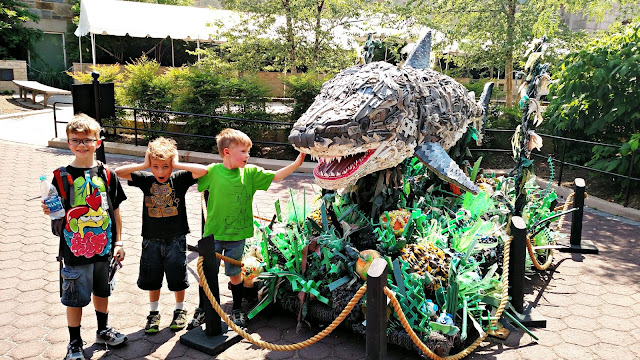 It doesn't get much more exciting than getting to examine elephant poop up close and personal. 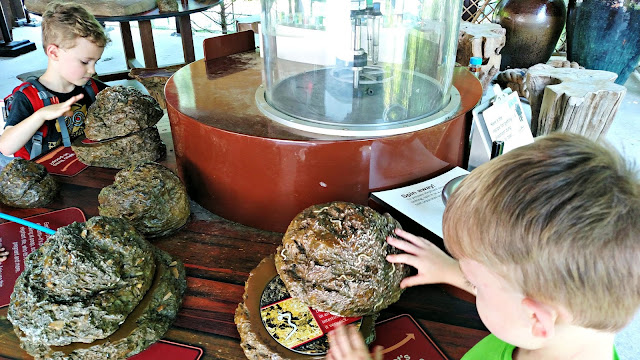 We did make it by the eagles, but as I was only taking pictures with my cell phone (I had enough to keep up with that day without lugging around my real camera) I don't have a picture.  But the twins were thrilled to see them.

We only made it through half the zoo before heading back to the mall area so we could catch the Museum of Natural History before it closed.  Cort really want to see the Minerals and Gems exhibit.  He's still obsessed with rocks.

Readers, what is your favorite zoo animal?

Wow, keeping up with three energy guys when it's 90!

Your boys are sooo cute and adventurous. Who would have thought you'd get a chance to examine elephant poop? i especially enjoyed the giraffes the last time I was at a zoo, the large one in NC.

Never enough time when visiting a zoo it seems is there?

What a fun trip, those kids have it made.The eagle I have been watching just started flying this last week.It will be sad to see them go, hope they stick around for a bit.

That is so wonderful, Lisa. Your boys are interested in so many things; you and Paul are great parents.

Oh, and I always liked Monkey Island here at our zoo. :)

Elephant poo... LOL! That art exhibit is phenomenal! My kids love the zoo too, but unfortunately, ours is a little underwhelming. It's much more rewarding to head to Disney's Animal Kingdom. The kids love the Safari ride and the Savannah. They added Zebras recently. Really cool.

We need to visit our zoo again. They just got done with some renovations.

I like watching the sloth. It's just such an odd looking animal.

Dinosaur poop might be even better. If we could find any.

Oh my gosh these are fun pictures!!! And it looks like they are actually among the seals with no barriers! So they got to touch and pet them? These seals must be tame. I love the trash exhibit and the way the boys are hamming it up!! And you must have set a new record...I don't think anyone has posted elephant poop! Good thing there was a fountain, I would have totally melted!

My parents took me to the zoo there in the early sixties. Sadly, at the time there was no elephant poo available to the public. ;-)

I love going to the zoo. It brings me joy.

That would have been a super busy day! I love watching the girafes. My husband loves rocks etc., too!

Glad they got to see the Eagle and the art displays are very nice. Sounds like a long day!

I always love the lions :)..They are uber cool. But I also love to see the bears. Feels like hugging them :)

We love the otters and penguins! This looks like a great trip to the zoo!